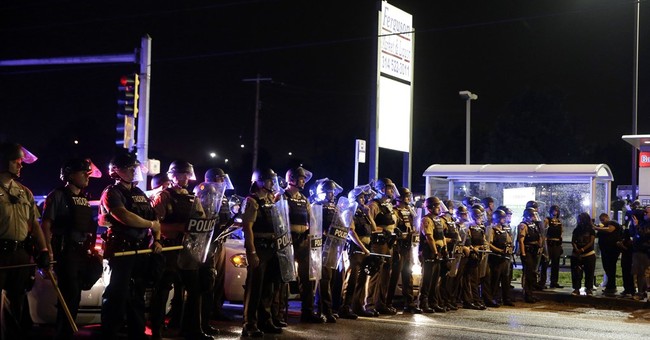 Gunfire erupted again on the streets of Ferguson following a day for the most part of fairly peaceful protests, though with another young black male shot by the police on the one year anniversary of the police shooting death of black teenager Michael Brown.

A shooting which was ruled as justified following a lengthy investigation by the county prosecutor’s office, a St. Louis County grand jury, and the U.S. Department of Justice. The DoJ headed up at the time by Attorney General Eric Holder, certainly someone who proved to be no friend of American law enforcement.

Interstate highways have been shut down creating massive traffic jams in parts of the St. Louis metropolitan area, and threats of additional unrest and civil disobedience in the coming days have been made by various groups allied with the Ferguson rioters. Most of whom have no connection to the North St. Louis County community.

Some have jokingly commented that apparently the Nike tennis shoes looted during last fall’s unrest have worn out or been outgrown, and that’s the real reason for the new unrest being experienced in Ferguson. Time for back to school shopping.

The reality is that this is all part of the ongoing “fundamental transformation” that Barack Obama promised us he was going to bring to America. An American insurgency orchestrated and choreographed right out of the White House.

Barack Obama’s true interest and intentions since he took office has always been his perceived need for “social justice” in America. While overseas issues continue to bedevil him and distract him from his domestic agenda, the president’s “default” positon is always to go back to confronting what he believes is an unfair system in America that holds back minorities. Particularly black people in America.

Confronting the administration’s arguments with facts has never met with much success. Facts to Obama and the Democrats don’t matter. That’s why pointing out that while blacks only make up a small percentage of this country’s population, they account for a disproportionally large amount of the crime that occurs on the streets of America.

Unlike Democrats, to a logical and honest thinker this would help explain why there’s a disproportionate number of black males in prison in America. It’s simple mathematics, not racist police.

When a store owner in Ferguson or Baltimore is looted by marauding hordes of blacks stealing his merchandise and destroying his property, and in many cases burning it to the ground, it’s hard to find common ground with those who would argue for social justice.

So while once again the insurgency in Ferguson tries to go back on the offensive, rioting and looting to celebrate the life of Michael Brown on the anniversary of his death, most Americans are fed up with what’s going on. In fact, most Americans were fed up long ago with the criminal behavior of the ‘Black Lives Matter’ movement.

Just as they became fed up with the ‘hands up don’t shoot’ movement, another canard perpetrated on hard working people by black Americans unwilling to admit or accept their own failings and shortcomings within their own community.

Racist police aren’t responsible for the countless black victims shot by other blacks every day in American cities. An out of control illegitimate birth rate in the black community, absent fathers along with the breakdown of the black family structure are what’s largely responsible for the vast majority of what ails black people in America today.

Along with an entertainment industry that promotes ‘thuggery’ and the ‘gangsta lifestyle’ that does nothing to encourage responsibility or education as a means of escaping poverty, or a potential death sentence at the hands of another young black male cruising the streets of America’s inner cities.

The number of black males actually shot and killed by the police each year is a small number considering the number of police encounters young black males have with police officers across the country.

But you won’t hear that from the Obama Administration. All you’ll hear from them are statements about the police “acting stupidly”. But then again that’s all part of the “fundamental transformation” Barack Obama promised to do to this country, whether it’s good for us or not.