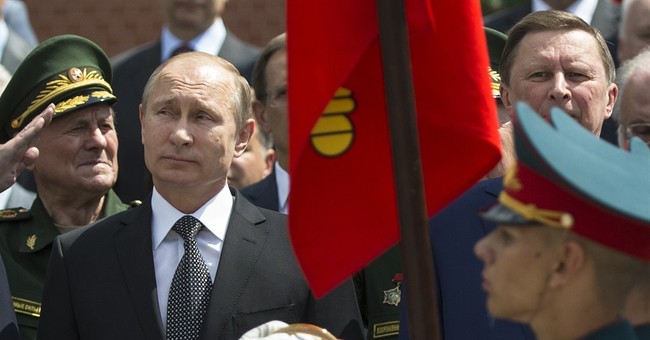 With roughly a year and a half left in Barack Obama’s presidency, Russian leader Vladimir Putin looks to be shifting into high gear his effort to rebuild the Russian empire, and to humiliate and punish the United States of America and the West for our collective gloating following the dissolution of the former Soviet Union.

Putin’s psyche was stung by the West and particularly the United States declaring victory in the Cold War when the Soviet Union collapsed. As a staunch supporter of the previous regime, but more than that as an ardent Russian patriot, he viewed comments about “defeating the Soviet Union without firing a shot” made by western politicians and the media as ‘crowing’ over Soviet Russia’s failure.

Putin’s incursion into Ukraine is just the first phase of his intended policy of re-establishing Russian hegemony over the entire region, with the Baltic nations squarely in his sights. Poland and the rest of the former Soviet Bloc countries also find themselves facing the threat of aggression by a resurgent Russia under Vladimir Putin.

Without spelling out what they intend to do, Russia has threatened to retaliate should the U.S. go ahead with plans to base heavy weaponry in those same Baltic States and other former Soviet satellites that border Mother Russia. Considering what’s taking place right now in Ukraine, Russia’s threats cannot be dismissed.

Cyber-attacks against the United States have been occurring and continue to threaten our national security, and which have gone unanswered thus far, so it’s obvious our enemies view the United States as severely weakened under this administration. Weakened and unwilling it seems to respond to threats and acts of aggression from a variety of adversaries.

The Obama Administration continues to push for a nuclear agreement with Iran, seemingly determined to achieve a deal regardless of the conditions, or whether the security of the United States and that of Israel, our closest ally in the Middle East are placed at a distinct disadvantage.

The Iranian mullahs have stated their position clearly, which includes no inspections of Iranian military facilities. What should be a deal-breaker in these negotiations, but one which it seems the U.S. is getting closer to accepting if that’s what it takes to get a deal signed.

Not that it matters since the Iranians cannot be trusted to abide by any agreement anyway. Entering into these negotiations has been nothing more than a delaying tactic on the part of Iran.

They will never give up their goal of becoming a nuclear power in the Middle East, and perhaps threatening Europe or even the U.S. with nuclear retaliation should we do anything they take issue with. And certainly not giving up their stated goal of destroying the State of Israel.

But clearly the most serious threat right now comes from Vladimir Putin’s Russia. Putin is not content with merely making Russia strong once again, but in also punishing the United States and the West.

This is a matter of personal and national pride for him, and as the Soviet leaders who preceded him, he’s more than willing to have his people pay whatever it costs to humiliate the United States, as he believes Russia was humiliated.

Not a recipe for optimism with Barack Obama in office for another year and a half.