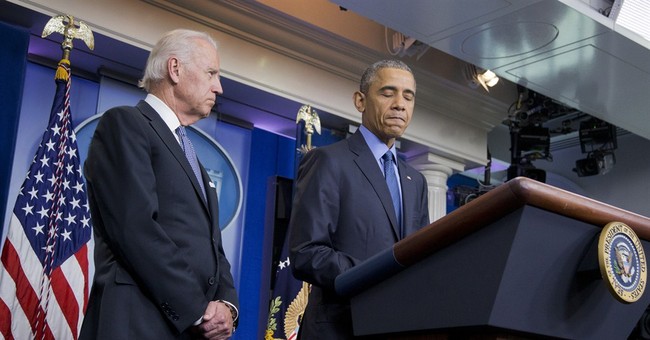 Watching Barack Obama speak the other day on the South Carolina church tragedy one could predict that his comments would include another call for more gun control. That is status quo for the Obama Administration, and for Democrats in general. To blame an inanimate object instead of demanding accountability for the individual. It’s been a hallmark of Democrats for decades.

It seems that for Democrats holding people responsible for their actions is near impossible for them to do. Take for instance last year in Ferguson, Missouri. Instead of holding Michael Brown responsible for initiating the events that ultimately led to his death, Democrats almost uniformly jumped on the “hands up, don’t shoot” bandwagon, blaming the police and Officer Darren Wilson specifically for what happened.

When the police in Ferguson came under intense attack, which included being sniped at by rifle fire and assaulted with Molotov cocktails, bricks and glass bottles, forcing the police to respond by deploying tactical vehicles and equipment, the Democrats response was to blame the police.

According to Democrats the police were at fault for using excessive force when in reality the police response was a direct result of the actions of the rioters on the streets of Ferguson. Had the demonstration remained calm and peaceful there would have been no need for the police to use more aggressive tactics or deploy tactical equipment to try to regain control of an out of control situation. Once again instead of blaming and holding rioters responsible for their actions, Democrats were quick to point their finger elsewhere.

Following the Benghazi attacks of September 11, 2012 which resulted in the deaths of four Americans including the U.S. ambassador to Libya, Democrats led by Barack Obama and Hillary Clinton quickly looked to place blame on an unknown YouTube video clip. Another inanimate object they claimed was responsible for the deaths of innocent human beings.

Curiously though more and more information is coming out about the Administration’s own gun-running operation in Libya providing weapons to rebels in Syria, many of which who are probably the same ISIS terrorists now threatening to bring their fanatical terrorism to American shores.

Add to the Libya fiasco the ‘Fast and Furious’ gun running operation with Mexico that resulted in the death of American Border Patrol Agent Brian Terry, and once again the Obama Administration denies their own responsibility and looks to place blame elsewhere.

Since the investigation into the Charleston church shooting is far from complete one would think the reasonable thing to do would be to stay away from knee-jerk reactions and finger-pointing, but that wouldn’t go along with what Democrats do best.

Which is to demagogue any issue they think they can gain some sort of political advantage from, and to avoid blaming or holding an individual accountable for their actions.

So expect a chorus of more calls for gun control from the Democrats and the Obama Administration, joined quickly by Hillary Clinton in her quest to distract voters from her own record of criminality. And instead of holding individuals responsible for their own actions and finding real answers to problems, Democrats will continue to blame an inanimate object. It’s much easier than showing leadership.

Is Biden About to Flip Flop on Eliminating the Filibuster?
Katie Pavlich
Leader McCarthy: By 'Putting Hyde on the Chopping Block,' Democrats Engaging in 'Change of Course of Decades'
Rebecca Downs
Jen Psaki's Ridiculous Spin After Biden Claimed He's Been to the Southern Border
Julio Rosas
McEnany on McAuliffe Cutting Interview Short: 'Democrats Definitely Believe That The Press Is in Their Corner'
Madeline Leesman
McAuliffe Made Excuses for Northam's Racist Yearbook Photo After Condemning It
Spencer Brown
CBP Finally Releases Southern Border Encounter Numbers After Weeks of Being MIA
Julio Rosas