Should Hillary Wear a Body Camera? 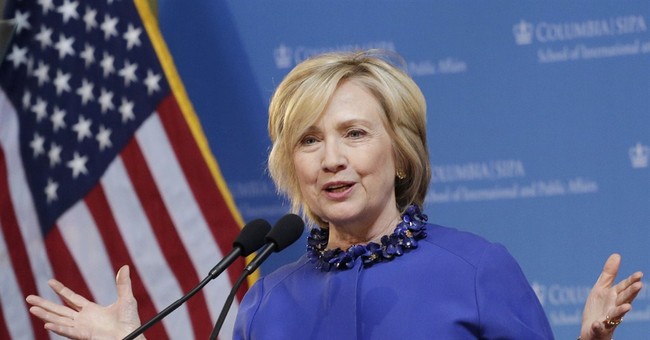 Former Secretary of State Hillary Clinton recently made some comments about the criminal justice system in America and the large percentage of African Americans serving time behind bars. Clinton also briefly alluded to the recent incidents involving the deaths of black men at the hands of police officers.

During her comments the former secretary of state and presumptive Democrat nominee for president in 2016 suggested that all police officers across the nation should wear body cameras as a means of holding police accountable for their actions.

She added that this would be able to provide an accurate video record of incidents that result in the police ‘use of force’. Clinton added that the cameras would help with “transparency and accountability” of the police across the country, and help ensure that the police act legally and responsibly, especially in dealing with minorities.

Considering Hillary’s long history of lies, obfuscation and cover ups, that’s certainly a curious position for her to take. Her record certainly isn’t one of supporting transparency and accountability. The former first lady wasn’t the least bit “transparent and accountable” during all of the scandals that plagued her husband’s administration.

Perhaps it’s time to consider fitting Hillary with her own body camera. Think about it. Wouldn’t it have been helpful during the Benghazi attacks to find out exactly what transpired in the White House Situation Room on that fateful night? It would certainly be enlightening to know what conversations took place between her and Barack Obama during the attacks on our consulate facility in Libya.

Earlier during her husband’s administration a Hillary-Cam could also have answered the questions about how her long-subpoenaed Rose Law Firm billing records that were part of the special prosecutor’s Whitewater investigation, showed up on a table in the White House residence. Perhaps the most secure structure on the face of the earth without anyone knowing how they got there.

And what about the Travel-gate and all the other scandals and questionable activities that took place during her husband’s administration? What about Paula Jones-gate, Kathleen Willy-gate, and Monica-gate? A Hillary-cam could have given us important insight into the discussions that took place inside the White House on these situations.

OK, there would probably have to be a parental warning for each of those last three video records, but that could easily be accomplished by just placing an ‘R’ or ‘X’ rating at the start of each video. Actually, considering Hillary’s reported regular use of vulgar language and cursing it might be best to include a ‘mute button’ for the camera.

With her history of corruption and scandal the editing process might slow down providing the records to all the investigative committees sure to crop up during a Hillary Administration.

A video record of Hillary seated at her computer deleting her e-mails might help us all understand the process that she went through determining which e-mails were “personal” and which should have been released to the Benghazi Select Committee. And would even shed some light on the process she used to wipe her server clean.

Considering all the information coming out about the Clinton’s apparent insatiable appetite for foreign cash donations to their charity, a video record of where all the sacks of cash are coming from would also be useful to see.

Yes, it’s definitely time to consider hooking a body camera up to Hillary. Especially since she’s now so outspoken about the importance of “transparency and accountability.”