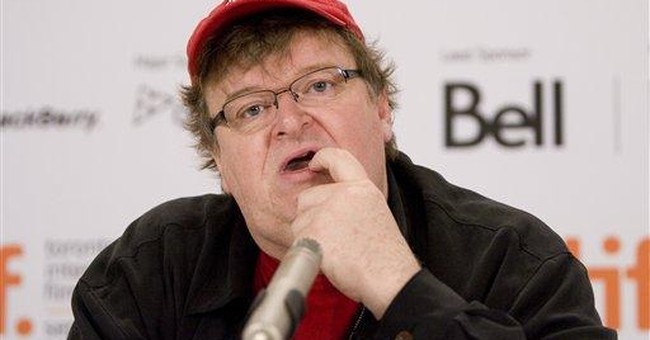 Hollywood filmmaker Michael Moore weighed in on the recent release of the annual Oscar nominations, during which he made it very clear that he does not like the Clint Eastwood Oscar nominee ‘American Sniper’ nor its subject, Navy SEAL Chris Kyle.

In a tweet Sunday, Moore attacked the film ‘American Sniper’ and Kyle, who has been credited as the deadliest sniper in U.S. military history: “My uncle killed by sniper in WW2. We were taught snipers were cowards. Will shoot u in the back. Snipers aren't heroes. And invaders r worse”.

Moore, best known for some forgettable leftist documentary films he produced, is also recognized as THE Hollywood elitist who can be counted on to show up around the country at any demonstrations for the ‘downtrodden’. Then once he’s made his very public appearance, hop back in his chauffer-driven limo and drive back to his waiting private jet, and then on home to his multi-million dollar estate. The hypocrisy of Michael Moore is only exceeded by the size of his dinner plate at the local buffet.

In March of 2012 during the ‘Occupy Wall Street’ protests in New York City supported by the Democratic Party, even some of the protesters heckled Moore during a visit he made to Zuccotti Park, site of the protests. Stoned out of their minds though they may have been, but even with their reduced mental capacity the hecklers were able to recognize how much of a hypocrite Moore is.

Michael Moore is old news. No one really cares what he has to say nor does anything he say carry any weight among rational thinking Americans. He is viewed as nothing more than a self-centered Hollywood elitist who spews out a boring leftist monologue while living a life of luxury.

As a member of the film industry Moore certainly has the right to offer his opinion about the product put out by Hollywood. Mind you a right fought and paid for by people like Chris Kyle.

And it’s certainly much easier for Michael Moore to insult a dead Navy SEAL. One wonders if Moore would make the same comments directly to Chris Kyle had Kyle’s life not tragically come to an end. Highly unlikely.

Moore will continue to spew out his leftist diatribes from time to time in his pitiful attempt to remain in the public eye. And Americans, particularly those who fought for his right to do so, will ignore his rants as he once again fades back into irrelevancy until the next ‘cause’ comes up.