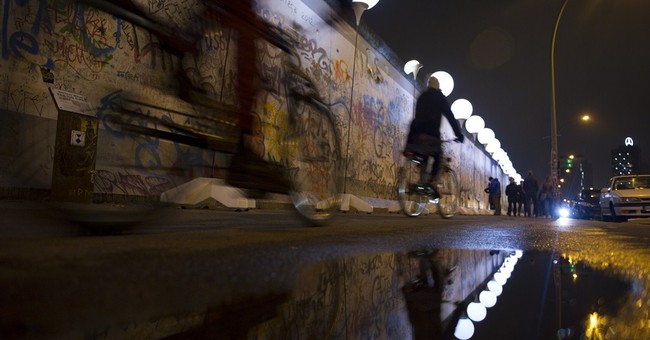 In 1979 I stood on a viewing platform near the Brandenburg Gate in West Berlin, looking across ‘The Wall’ into the communist controlled Soviet Sector of East Berlin. To this day I can still remember vividly the images that lay before me. The contrast was stark.

On the western side of ‘The Wall’ one could walk right up and touch the concrete edifice separating East and West Berlin. The city of West Berlin thrived, streets and stores full, cafés and restaurants busy with West Berliners enjoying the creature comforts available to them from a free market society.

On the east side things were much more grim, stores and shops empty of consumer goods for the most part, the basic daily necessities of life hard to come by. And one couldn’t even get close to ‘The Wall’. A strip of land separated ‘The Wall’ from the rest of East Berlin. A ‘no-man’s-land’ strung with barbed wire, mine fields, and search lights. As well as guard towers manned by East German Border Guards armed with machine guns. Border Guards who had strict orders to shoot to kill anyone from the East who approached ‘The Wall’.

The Berlin Wall completely surrounded the three western sectors of Berlin, still governed by the allies from World War II, the French, British, and the Americans. Our other World War II “ally” the Soviets controlled the eastern sector of the city, as well as all of East Germany through their proxy the East German ‘Volksarmee’. Even the large lake in the western portion of Berlin, the Wannsee, had barbed wire running right down to the water’s edge. It too was separated, and well patrolled by armed East German patrol boats and under-water hazards, to prevent anyone from swimming to freedom.

At various points along the western side of ‘The Wall’ one could see small monuments and wreaths, set up at that location by family members to memorialize an East German citizen who had lost their life while trying to escape to the west. Occasionally an intrepid East German would figure out a way to escape and they would make their way into the western sectors of the city. But most were gunned down by East German border guards specifically chosen for their excellent marksmanship skills.

At the time as I stood there on that platform I remember thinking to myself how I wish every single American could be flown over to West Berlin and have the chance to stand where I was standing, and see the difference between the freedom of West Berlin, and what was offered by the communists on the east side of ‘The Wall’. All those crazy hippies would get a good look at reality, as opposed to the visions of communes and leftist ideals taught in American universities by commie-wannabe faculty members.

This past weekend Germans celebrated the anniversary of the Berlin Wall coming down, twenty-five years ago. The Berliners in the east were finally able to throw off the shackles of communism which had kept them in bondage since the end of World War II. Freedom had come and Germany would eventually be reunited. There would be challenges ahead but the German people would persevere, and all Germans would share in the freedoms bought and paid for with the blood of freedom-loving German patriots, and quite a few Americans as well.

As I look back on the time I spent in this divided city, a time when the Cold War threatened on more than one occasion to turn into a shooting war between the Soviet Union and the United States, I still wish that all Americans had been able to experience what I had seen standing on that platform so many years earlier.

Perhaps they would have a better appreciation for what’s at stake now that we’re confronted with a resurgent Russia led by the ultra-nationalist and unrepentant KGB thug Vladimir Putin, who seems intent on trying to reclaim the Soviet Empire despised by so many former East Germans.

The Russian leader taking advantage of a weakened United States under President Obama, seems emboldened in his efforts to reestablish Russian hegemony over areas that once made up the former Soviet sphere of influence. Putin, who was personally insulted and distressed over what he viewed as American gloating following the fall of the former Soviet Union, believes it is his obligation to restore Russian honor. And he intends to do so at the expense of the United States, who he views as weak and uncommitted to defending freedom around the world, as we once had been.

While there will not be another physical wall built in Berlin again to separate the city, Putin clearly intends to separate Berlin and all of Germany once more, this time from the United States. Through threats and intimidation Putin intends to drive a wedge between Germany and the U.S., weakening and eventually destroying the NATO alliance. Leaving the remaining smaller NATO countries as easy pickings for Russia.

Unfortunately for the next two years it seems that this time there will be no strong voice demanding the Russians to “tear down a wall”. A voice backed up by a strong and determined American military. The only voice that will be heard will be that of Vladimir Putin, laughing with disdain as he continues his efforts to reclaim the glory days of Russia.