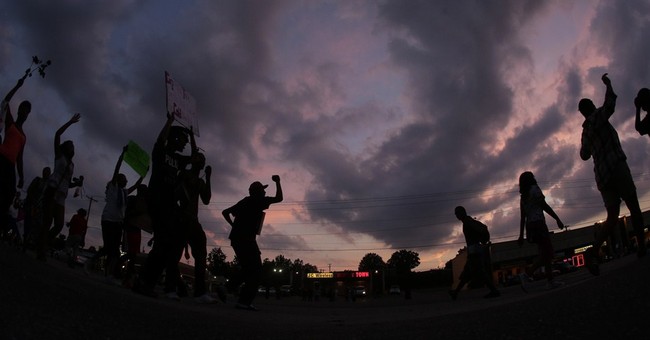 Listening to the recent rhetoric from some of the protestors coming out of Ferguson, Missouri might lead one to wonder: is this still about “justice” for Michael Brown, or is there something more at play ?

Leaks from the Grand Jury have shed new light on the evidence in this case, and it seems to point to the fact that Michael Brown has already received “justice”. Justice at the hands of Ferguson Police Officer Darren Wilson, who in a struggle for his life, used deadly force against Michael Brown. It’s not the kind of result Brown’s family and supporters are wanting, but based on the evidence and facts of the case it is justice all the same.

Police Officers from all over the St. Louis area have been standing the line in Ferguson for over two months now, subjected to nightly riots, sniper fire, and other civil unrest. In those two months one officer has been shot and wounded, officers have been ambushed, firebombed, spit on, cursed at, they and their families threatened, and they have been physically assaulted. None of it shown on the ‘mainstream media’, which is invested in supporting a different version of the truth.

An insurgency continues in Ferguson. An insurgency which the leaders are hoping will spread once the Grand Jury releases its’ findings clearing Officer Wilson on any wrong-doing in the death of Michael Brown. YouTube videos have been posted by some of the loudest insurgents claiming that “Jihad will begin soon in St. Louis”. The New Black Panther Party is publicly crying out for a revolution against “white crackers”.

Police intelligence reports indicate that the New Black Panthers have started to arm the insurgency in Ferguson, and have issued threats if they don’t get what they demand to “kill police officers and other white people”. It’s also been reported that New Black Panther members and their allies have made trips to other cities across the country to solicit support and to plan for nationwide civil unrest. They have also threatened to expand their insurgent attacks to the predominantly white suburbs and communities outside of St. Louis.

New Black Panther radicals aside, why would other seemingly rational people demonstrating in Ferguson demand something that is clearly contrary to the facts, most certainly unconstitutional, and not in any way based on the evidence? They do it because they are intent to keep the fires of social unrest stoked and burning in order to pursue a larger goal. What is taking place in Ferguson is about seeking revenge against “white crackers” for over two hundred years of ‘perceived injustice’.

During the O.J. Simpson trial back in 1994-95 which resulted in Simpson’s acquittal for murdering two white people, many in the black community celebrated and cheered the verdict. They loudly applauded a black man getting away with murder based primarily on the fact that his victims were white. Though the evidence against Simpson was overwhelming, as happened then and is happening now, insurgents are making accusations that the police tampered with the evidence. No one capable of rational, critical thinking believed it during the O.J. Simpson trial, and no one believes it now with the Michael Brown case. Yet it’s certain that this theory will be put forth by the New Black Panther insurgents, and it will be supported by outside agitators like Al Sharpton, whose career began by making false allegations against the police during the Tawana Brawley fraud.

This brings us back to the streets of Ferguson. It’s been reported that just recently some family members of Michael Brown were involved in a confrontation with another group of family members on a Ferguson street corner. The confrontation had to do with the first group trying to capitalize on the current unrest by setting up a stand and selling T-Shirts memorializing Michael Brown. Apparently the second group took offense to being cut out of the profits, so they stole the cash box from the group of ‘entrepreneurs’. Another case of an apparent ‘strong arm robbery’ in Ferguson. Fortunately in this case none of the police officers responding had to fight for their life with anyone from the Brown family.

What is going on in Ferguson, Missouri hasn’t been about Michael Brown since the very first day when he was killed. The orgiastic frenzy the protestors are working up to once the Grand Jury decision is released will be about vengeance. A New Black Panther-led insurgency based solely on getting even with “white crackers”.