The Racism of Climate Change Alarmists

Duggan Flanakin
|
Posted: Aug 25, 2020 2:13 PM
Share   Tweet
The opinions expressed by columnists are their own and do not necessarily represent the views of Townhall.com. 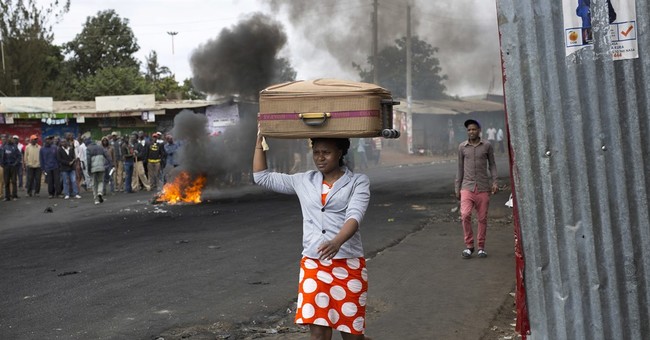 Climate alarmists now proclaim that climate change is racist. What hypocrisy. By this theory, the sun, our galaxy, and their creator are racist, since they have driven climate change throughout history.

Racism has certainly been a factor in many decisions about land use, zoning, education and many other aspects of our lives. But this began long before Europeans “discovered” America. Tribalism, the most fundamental form of racism historically, has been around at least since the dawn of the Iron Age.

The new racism is a prime domain of environmental alarmists, and a direct outgrowth of centuries of patronizing colonialism. Many still believe today’s poor and indigenous people must be “guided” into a “green” tomorrow and not allowed to use the tools that Western and other countries employed to grow, create wealth, improve living standards, and remain free.

Many even seem OK that their “solutions” to “climate change” yield highly negative results for billions of people worldwide whose lifestyles are far removed from the privileges of eco-elites – who don’t even enjoy the blessings of electricity, 24/7/365 or even at all.

Instead of recognizing their own role in sustaining energy poverty (and its resultant misery, disease, and death), the alarmists berate the West for escaping generational poverty through technology. Penn State meteorologist Gregory Jenkins (who works for Dr. Michael Mann, co-creator of dangerous Mann-made climate change) has linked racism to climate change “because it dictates who benefits from activities that produce planet-warming gases and who suffers most from the consequences.”

But their “solutions” always deny African and other poor families access to fossil fuel “activities” – and blessings – while burdening their own societies with heavy taxes and mandates that would curtail affordable energy and living standards for billions.

Fifteen years ago, Cameroonian journalist Jean-Claude Shanda Tomme said environmentalists “still believe us to be like children that they must save, as if we don’t realize ourselves what the source of our problems is.” Incredibly, this remains a prevailing attitude.

In its introduction, Congress Of Racial Equality national spokesman Niger Innis said the green elites’ policies “prevent needy nations from using the very technologies that developed countries employed to become rich, comfortable and free of disease. And they send millions of infants, children, men and women to early graves every year.”

They insist that Africans not be allowed to combat malaria with DDT, which eradicated malaria throughout the developed world. Nor may Africans rely on their abundant oil, coal, natural gas, nuclear or hydroelectric resources, the same technologies and resources that built Western and Eastern societies.

My colleagues and I pointed out that $500 billion in foreign aid had done little to improve the lives of ordinary Africans, who still had few highways, no real electric grid, little sanitation or clean water, few hospitals, and millions dying annually from diseases almost entirely wiped out elsewhere in the world.

At that time, OPEC Secretary General Mohammed Barkindo pleaded with Western leaders that “energy is fundamental for economic development and social progress. While the use of all forms of energy is welcome, it is clear that fossil fuels will continue to satisfy the lion’s share of the world’s growing energy needs for decades to come.” But Africans are still routinely denied financing to develop those resources for their own citizens. This is racism at its worst.

I also reviewed a World Bank Development Research Group proposal for building a 100,000-kilometer African highway system to connect all major African capitals and large cities. It would cost just $30 billion, plus $2 billion a year in maintenance, but could generate $750 billion a year in overland trade among African nations. But it quickly hit the environmentalist/development bank dustbin. Pure racism.

The racism even extended to higher education, as European and American universities recruited Africa’s brightest and best African students and faculty, leaving their own fledgling institutions of higher learning in shambles. Lydia Polgreen said this academic flight “depriv[ed] dozens of nations of the homegrown expertise that could lift millions out of poverty.” More racism.

He put it bluntly: “The OECD and IEA don’t necessarily know what’s best for the people who live on this planet. Pressuring governments to stop supporting fossil fuels certainly would not be good for the African oil and gas companies or entrepreneurs striving to build a better future. And it could be downright harmful to communities looking at gas-to-power initiatives to bring them reliable electricity.”

“Too often,” Ayuk added, “the discussion about climate change – and the call to leave fossil fuels in the ground – is largely a Western narrative. It does not factor in the needs of low-income Africans who could reap the many benefits of a strategic approach to oil and gas operations in Africa: Reduced energy poverty, job creation, and entrepreneurship opportunities, to name a few.”

On the global stage, he concluded, the OECD and the IEA are “dismissing the voices of many Africans who want and need the continent’s oil and gas industry to thrive.” African energy entrepreneurs and Africans who care about energy poverty are struggling. But their voices are ignored by these power brokers, and the world.

Journalist Geoff Hill highlighted how many Africans still rely on increasingly scarce firewood to cook and heat their homes on cold nights, despite the environmental damage caused by stripping forest habitats to oblivion. Of the world’s 50 countries with the least access to electricity, 41 are in Africa – despite abundant rivers, sunlight, and oil, gas, coal, and uranium reserves.

The chief reason, Hill explained, is corruption – traced back to the foreign aid Dambisa Moyo criticized. Climate alarmists naturally say it’s someone else’s fault. Thankfully, finally, says Hill, some Africans are admitting their own role in allowing corrupt cultures to rule them.

Nigerian neurosurgeon Dr. Sylvanus Ayeni’s 2017 book Rescue Thyself details the failure of African governments to serve their people. He is saddened that, despite over a trillion dollars in aid to Africa from the U.S. alone, so much has been blown on palaces, private jets, and outright theft.

But who empowered these greedy leaders, who sought to do what donors wanted? Will the West finally recognize that it was their paternalistic racism that empowered this corruption? Will it change its ways? Or will it just continue the eugenic practices that dehumanized Africans as “unfit” to reproduce?

Duggan Flanakin is Director of Policy Research at the Committee For A Constructive Tomorrow (www.CFACT.org)