Dr. Shea Garrison
|
Posted: Feb 28, 2020 12:01 AM
Share   Tweet
The opinions expressed by columnists are their own and do not necessarily represent the views of Townhall.com. 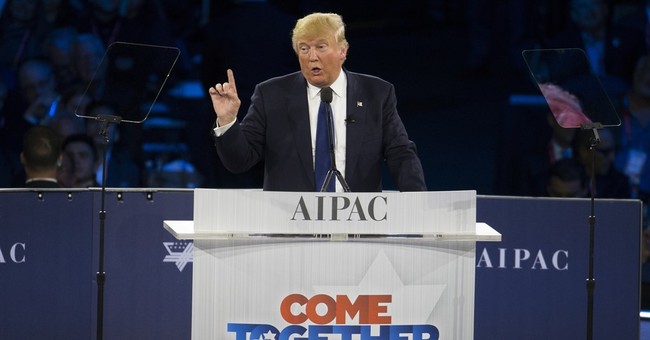 Senator Bernie Sanders’ accusation of bigotry, aimed at the American Israeli Public Affairs Committee, is ironic given that AIPAC is a bi-partisan group that supports a two-state solution to the Israeli-Palestinian conflict, something that Bernie says he also supports.  Bernie also wants “an independent, democratic, economically viable” Palestinian state, the same objectives outlined in detail in President Donald Trump’s recent peace plan -- yet Bernie has publicly rejected that, too.

Something smells about Bernie’s ongoing declaration that he is both “pro-Israel and pro-Palestinian.” He has digressed to the same modus operandi favored by the Palestinians -- hurling racist accusations, refusing to engage -- with the attitude that nothing is ever good enough.

When “Peace to Prosperity,” President Trump’s Middle East peace plan, was announced last month, the Palestinians escalated violent attacks, injuring and killing both Israelis and Palestinians. Refusing for months to even engage with the U.S., they rejected the plan before even seeing it. The Palestinian Authority in the West Bank called it a deceptive plan, expanding Israeli settlements and promoting apartheid (another form of bigotry). Hamas in the Gaza Strip said that armed and united Palestinian resistance against the “occupying power” is the only way to confront the “dangerous deal.”

It is important to realize that this “dangerous” deal that incites violence in the Palestinians, and outright rejection from Senator Sanders, requires Israel to make a significant transfer of land for a new Palestinian state that is comparable in size to the pre-1967 territory of the West Bank and Gaza -- something that Sanders says he wants. It also provides substantial opportunity for economic growth with a massive investment of $50 billion supported by new infrastructure.

The economic part of this plan (which makes up at least two-thirds) is particularly significant, as it hopes to empower and create stability among the Palestinians, breaking their cycle of terrorism, poverty, and reliance on foreign aid. Again, these are goals that Sanders has said that a peace plan must have. Estimates for potential economic growth from the investment is to double the (currently stagnate) Palestinian GDP in ten years with the creation of over one million new jobs, cutting the poverty rate in half.

While still affirming their statehood and border security, this plan requires Israel to give up land to which most believe it has a legal and historical right. Although Jerusalem would remain Israel’s capital, the Palestine state would have a capital east of Jerusalem. The plan also avoids forced population transfers of both Arabs and Jewish settlements.

For people living daily in poverty and terrorism, a deal like this is at least a great starting point for negotiations and coming to the table in good faith. But the Palestinian problem is “leadership” that is totally disinterested in peace or prosperity for their people. The Fatah, Islamic Jihad, and Hamas all benefit from war and corruption. Simply put, “there is no money for them in peace.” Destruction of the Israeli state and death to Jews, in fact, seem the only consistent “plan” Palestinian leadership wants.

Abraham Wagner, National Security Council staff under Presidents Nixon and Ford, believes President Trump’s plan is “the most thoughtful and realistic effort regarding this issue in decades … a plan that Israel can accept and gives the Palestinians more than they could realistically hope for.” At the same time the administration “achieved acceptance of this plan from neighboring Arab states—a feat that no prior administration ever accomplished.” However, he predicts “… the plan is doomed to fail, and the Palestinians have only themselves to blame ...”

President Trump’s “realistic two-state solution” envisions a path to achieve the success that both parties want. It just may be the most pro-Israel and pro-Palestinian plan ever written.

Bernie should support it, given his stated views. But since he since he hurled insults at AIPAC without ever actually attending one of their conferences which unite “Democrats, Republicans, Jews, Christians, African Americans, Hispanic Americans, Asian Americans, progressives, Veterans, students, members of the LGBTQ+ community, and others,” it does makes you wonder if he even read the President’s plan before criticizing it, too.