Anywhere But Here: The Looming Train Wreck of No Child Left Behind 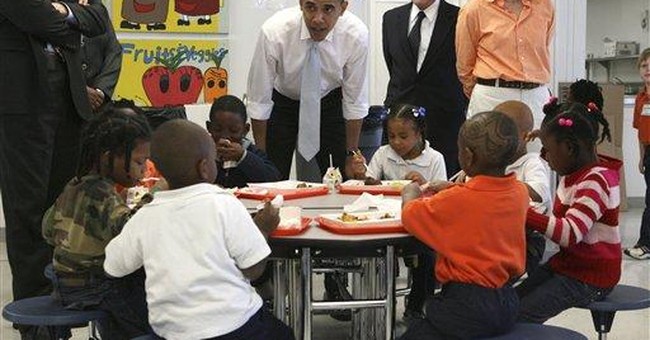 In the opening scene of Saving Private Ryan, Captain John H. Miller (played by Tom Hanks) leads a group of American soldiers in storming the beach at Normandy. Pinned down behind inadequate cover and facing extremely heavy enemy fire, Miller orders his men to move out, prompting one of his soldiers to ask where they should go.

Miller bellows to his men: “ANYWHERE BUT HERE!”

Facing the task of reauthorizing No Child Left Behind (NCLB), Congress also faces an unsustainable status-quo. Although fashioned with the noblest intentions, NCLB created a perverse incentive for states to lower their academic standards -- an incentive that will become increasingly powerful in coming years.

The law reflects contradictory urges regarding education policy. On the one hand, some want Congress to act to improve education, and on the other, some wish to preserve the tradition of state and local control of schools.

In NCLB, Congress attempted to finesse this contradiction, but failed to do so successfully. The law requires states to test almost all students, and to have an ever-increasing percentage of them reach proficiency in all tests by 2014. However, NCLB leaves the content and the passing thresholds of these tests to the states.

You don’t need a Ph.D. in game theory to see the problem with this, just a little common sense. As “proficiency” requirements have risen, states have begun to dummy down their tests to avoid federal sanctions.

Congress must now make an actual choice about which level of government should predominate in education policy -- or the price will be very high.

Scholars have already noted the beginnings of a “race to the bottom,” as states lower passing thresholds and otherwise make the tests easier to pass.

Congress has set up a looming train-wreck in public schools. If allowed to play out, every child in America may “pass” state proficiency exams by signing their names to completely meaningless tests.

Congress can either become far more intrusive in the setting of state education policy, or let the states lead. Federal education policy must move in one direction or the other, but cannot remain stationary.

Evidence regarding the effectiveness of federal aid to education has remained scant through the years. In 2004, Secretary of Education Rod Paige bluntly noted “We have spent $125 billion on Title I programs for disadvantaged students in the past 25 years, yet we have virtually nothing to show for it.”

Despite this record, some see the race to the bottom as an opportunity to expand federal control over local schools. Some have begun to make the case for “national standards.” The logic is simple: states can’t lower standards that they don’t control.

We need to move precisely in the opposite direction. Above all else, first the federal government should do no harm in education policy. The mess of NCLB inspires no confidence in the ability of Congress to fashion standards, even if it were constitutionally appropriate, which it decidedly is not.

Many Americans prefer to manage their own affairs with as little federal meddling as possible. Ironically, the fate of No Child Left Behind may fall into the lap of the man who took Goldwater’s seat in the Senate, John McCain.