Drew Johnson
|
Posted: Jul 14, 2021 12:01 AM
Share   Tweet
The opinions expressed by columnists are their own and do not necessarily represent the views of Townhall.com. 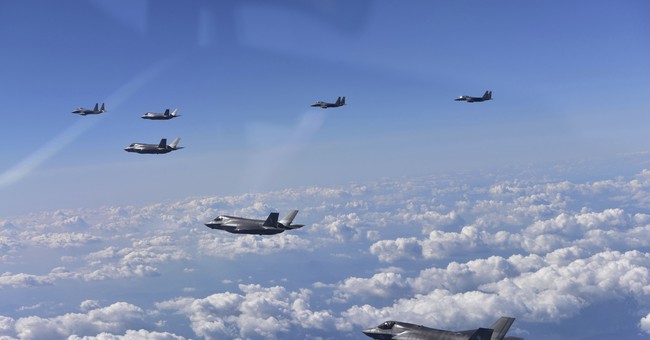 The biggest boondoggle in the history of the world will get even more expensive for U.S. taxpayers unless members of Congress finally decide enough is enough.

When the F-35 Joint Strike Fighter Program launched in 2001, it was hailed as a “high-performance, low-cost stealth aircraft.” Now, $1.2 trillion later, it has proven to be anything but.

Despite being the most expensive military program by any country ever, F-35 fighter jets have proven defective, dangerous and largely a useless waste of Americans’ hard-earned tax dollars. And Congress’ nonpartisan watchdog agency agrees.

Gaps between what the F-35 program was supposed to cost to operate and its actual price tag are projected to reach about $6 billion a year, according to the GAO report.  In total, the fighters will cost taxpayers more than $1.7 trillion if Congress doesn’t put the brakes on the boondoggle.

In addition to being a record-breaking black hole for taxpayers, the F-35 program is also a dangerous, ineffective and hopelessly defective fighter for the military.

A February 2020 Pentagon report revealed the F-35, which Lockheed Martin has produced in various configurations since 2006, still has 883 unresolved design flaws.

Shortly after the report was released, top military brass placed permanent flight restrictions on the types of F-35s flown by the Navy and Marine Corps after they were found to be faulty and hazardous.

During sustained supersonic flight, military officials learned, the jets’ stealth coating blisters and wears away, allowing enemies to easily detect them on radar. Rather than fixing the problem, Pentagon officials chose to slap strict limits on the amount of time F-35s can fly at supersonic speeds. As a result, the jets are incapable of performing some of their most basic functions including supersonic intercepts and "maneuvering at high speeds to avoid a missile or survive a dogfight."

Problems with the jets don’t end there.

F-35s  are prone to pressure spikes that cause “excruciating” ear and sinus pain. Antennas necessary to communicate with friendly forces are easily damaged and rendered useless. The jets’ multimillion-dollar on-board radars often fail and have to be rebooted mid-flight due to buggy computer code. Additionally, the computer systems used to operate the fighters are vulnerable to being hacked by foreign adversaries.

The jets are constantly in the hangar for maintenance and modifications, leaving the fleet constantly depleted and incapable of meeting the Pentagon’s goal for mission-ready F-35s.

An F-35 test pilot even admitted that the jet performed worse than 1980s-era F-15s in dogfight situations. The plane is often unable to turn or climb fast enough to shoot down an enemy jet or avoid incoming enemy gunfire.

Fortunately, there’s a promising alternative to the F-35 program on the horizon.

The Air Force has already built working prototypes of the Next Generation Air Dominance (NGAD) Fighter, the jet project expected to replace the Joint Strike Fighter Program. By discontinuing new orders of F-35s and speeding up the development of the NGAD program, taxpayers and the military will be better off.

The only thing standing in the way of gradually transitioning to better, safer and more cost-effective fighter jets is the lobbying power of Lockheed Martin. The aerospace and defense giant doesn’t want Congress to kill its golden goose.

Lawmakers and Pentagon officials continue throwing good money after bad because the fighter jet fiasco is rooted in a flawed approach to government contracting.

Once Lockheed began presenting taxpayers with the bill for cost overruns related to producing F-35s, Defense Department officials and members of Congress said nothing. When Lockheed manufactured defective jets, the federal government paid Lockheed to fix them. After F-35s were plagued with safety issues, Lockheed was awarded with a new multibillion-dollar recurring contract to provide maintenance and logistics services.

Lockheed stands to make an additional $527 billion dollars thanks to cost overruns, design flaws and unforeseen maintenance expenses before the conclusion of the F-35 program’s 66-year life cycle. In other words, the longer the F-35 program is allowed to continue — and the worse the fighters perform and the more flaws that have to be fixed — the more Lockheed is paid.

Lawmakers must choose taxpayers, as well as the brave men and women piloting America’s fighter jets, over lobbyists and business interests and move on from the disastrous F-35 debacle.

Drew Johnson is a government waste expert who serves as a Senior Fellow at the National Center for Public Policy Research.