Drew Johnson
|
Posted: Aug 21, 2018 12:01 AM
Share   Tweet
The opinions expressed by columnists are their own and do not necessarily represent the views of Townhall.com. 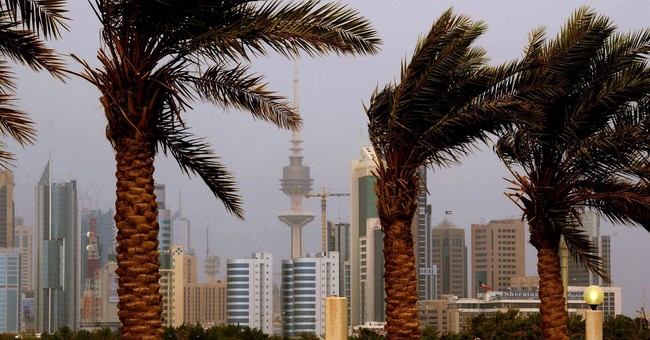 Since Kuwait’s liberation from Iraq in 1991, the United States has worked extensively with its ally in the Persian Gulf to advance mutual security interests in the region. The U.S. has established several military bases in the country – as of 2016 Kuwait hosts more active duty American troops than anywhere else in the Gulf region – while also supplying the Kuwaiti army with over $8 billion worth in arms sales.

Throughout this process, America’s Department of Defense has relied on contractors to handle vital logistics and security responsibilities at the country’s ports, which are the main access points for most of these supplies. This arrangement has generally been cost effective for the United States, but now – thanks to the actions of a single Kuwaiti official – millions of dollars of additional costs are being forced upon the U.S.

In a reversal of the status quo, the bidding process for coveted port contracts by U.S. operators has gone from open and competitive to plagued by corruption. American military contractors’ inability to operative effectively upends years of cooperation and has serious implications for American taxpayers.

At the heart of this controversy is Sheik Yousef Al-Shaba—a member of Kuwait’s royal family. Since his appointment as General Manager of the Kuwait Port Authority (KPA) in 2015, the KPA has waged an aggressive campaign against KGL – a long-time contractor for Pentagon – despite the fact that the KPA actually has no legal authority to prevent KGL from supporting U.S. military operations. KPA’s targeting of this trusted U.S. government contractor is a prime example of its reckless nepotism.

KGL provides supply chain support to coalition forces and has worked extensively with the U.S. military, having managed dozens of operations in the region over the past decade. Despite the importance of the work KGL performs, the Port Authority has been blocking KGL from loading and undocking supplies at Kuwait ports since 2016.

In response, the Ministry of Interior wrote a letter to the KPA reminding the Sheik of the limits of the KPA’s jurisdiction over operations at the port by coalition forces. Nevertheless, he continued to illegally “blacklist” KGL, even after a Kuwaiti court awarded KGL $80.7 million in damages for loss of business, a ruling that has done little to reform KPA’s practices.

This pattern of interference is costing U.S. taxpayers big. The U.S. Army has been forced to terminate a $26 million contract with KGL because the KPA blocked its ability to operate at the port, even threatening to prevent any military or commercial ship from entering or leaving the port if it hired KGL. As a result, the U.S. Army had to sign a new contract with a more expensive KPA-favored competitor.

The same could happen with a $1.3 billion distribution contract the Department of Defense recently awarded to KGL to deliver food to our troops. If KGL is unable to perform that distribution work, and the U.S. is forced to work with another contractor, that alone will cost American taxpayers at least an additional $193 million.

The Kuwait Port Authority’s interference with port operations by coalition forces must stop. This not only represents a squandering of valuable taxpayer resources, but a threat to the national security interests of the U.S. – the exact things President Trump was elected to protect.

KPA’s rampant favoritism and blatant disregard of official government contracting decisions sets a dangerous precedent with potentially irreparable consequences. U.S. taxpayers should not foot the bill for Sheik Yousef’s personal agenda. And if the State of Kuwait can’t protect contractors that do business with the U.S. military, the White House must step in to protect American interests.