Education: The Future Depends on It 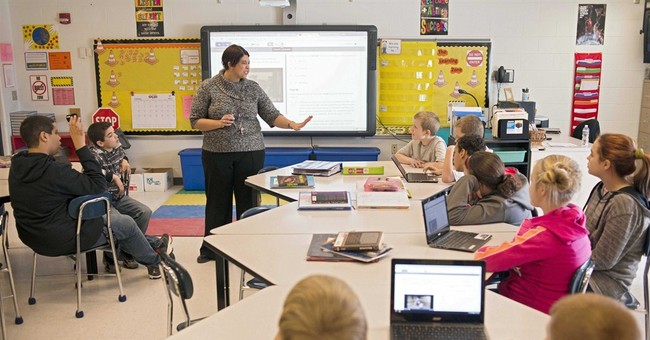 Over the past few months in cities throughout the country, we have seen harsh moments that have been characterized as "racial incidents." Whether it be Ferguson, Mo., New York City or Los Angeles, these events continue to occur in states regardless of which party dominates the political landscape.

The three cities previously mentioned are considered Democratic strongholds, which shows us that this is a problem regardless of who is in charge. But what exactly is the problem? What are we missing, or is there something that we are not talking about enough? Can we say it is just one thing that can be summed up as police brutality?

I think it would be ignorant to say there is just one thing that leads to situations like these. There are many things that we need to improve on as a nation. Better training for law enforcement is undoubtedly one of them. Police body cameras to record incidents would be a step in the right direction.

There is also a dire need to devote substantial energy to what is going on in cities like Chicago, Detroit, New Orleans and Washington, D.C., where we witness a plethora of violence, shootings and murder all the time. Teenage pregnancy is all too prevalent in these areas, as well. As women give birth at a young age, it hinders their ability to continue their education due to the significant responsibility of caring for a child. Without the education required for jobs with reasonable wages, the children are eventually forced into poverty, and the cycle of dependence continues. I have said it before: We should focus on child-care facilities that would allow unwed mothers to get their general education development or higher degree and become self-supporting.

Yes, education is the great divide in our country. A well-educated individual in America can usually write their own ticket in today's world, regardless of ethnicity, race, gender or financial status at birth. My whole medical career as a pediatric neurosurgeon was focused on young people and enhancing their lives. We would do everything we possibly could to not only give children longevity, but also quality of life.

Now that I've retired from medicine, I am just as interested in the quality of their future. That is why it is so important to emphasize education. It also is very important for us to emphasize fiscal responsibility. Those of us who are adults today are in charge of the finances of tomorrow. Running up huge bills for our children to pay is being fiscally irresponsible.

Common Core has been a hot topic regarding education, and while I think it is important to have standards, putting such a task in the hands of the federal government is naive, as opposed to the sound idea of placing the onus on local municipalities, schools, teachers and parents. The ability to maintain high academic expectations of our students is dependent upon the curriculum and lessons presented in the classroom. While proponents of Common Core may see benefits to such a system, how can the initiative be effective if it imposes confusing experimental teaching methods that our teachers cannot adequately adopt and our parents cannot actively support? Children thrive on confidence and encouragement, neither of which exists in an environment where the education purveyors are uncomfortable with the standards by which they and their pupils are judged.

America, like the rest of the world, is in the process of changing. It can be a good change, or it can be a bad change. I think the way to ensure it is a really good change is to have a lot of our incredibly bright, talented young people involved in the political process early on -- and this can only happen through a great education.

This nation's founders were extremely well educated, and they acknowledged that our system of governance relies upon an informed populace. We need the intellect, savvy and innovative spirit of our children. They should not be outsiders looking in. They should be participants in all aspects of shaping the future of our country, because they are, indeed, the future of our country.