Some Democrats Secretly Want and Need Trump to Win in 2020

Douglas MacKinnon
|
Posted: Sep 17, 2019 1:13 PM
Share   Tweet
The opinions expressed by columnists are their own and do not necessarily represent the views of Townhall.com. 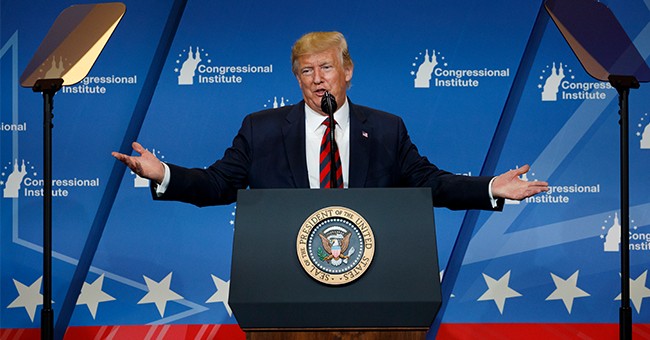 I spoke recently with a highly-experienced Democrat who desperately wants to defeat President Trump come November of 2020. That said, he is deeply concerned that, for self-serving reasons, a number of Democrats, certain liberal media outlets, and groups and organizations which support the Democratic Party, are secretly just fine with having President Trump in office for another four years.

As in, fees, ratings, profit, and an increased power base.

While the knee-jerk reaction of most Democrats and liberals would be to dismiss such an assertion out of hand, reality says otherwise.

As I have stressed in the past, human nature dictates that people tend to embrace the truth right up until the moment it reflects poorly upon them or their cause. Then, it can become a truth denied, shaded, or excused.

To the point and concern of this Democrat, the absolute truth is that over the last three years, hundreds of millions of dollars have been made by firms, consultants, media outlets and liberal organizations either fighting the “evil” of President Trump; reporting on the ‘evil’ that is Trump; or fundraising off of the “evil” personified by Trump.

To say otherwise is to deny the truth. A very profitable truth for a select few.

If Trump goes away, fees, ratings, ad revenue, and the breathless manufactured outrage pushed in fundraising campaigns will go with him. And if the fear and evil of Trump is no longer there to exploit, some left-of-center groups may cease to exist.

Simple economics which, according to this Democrat and others, contributes to the suffering of the core constituencies that the Democratic Party and its presidential candidates insist they most care about.

That would be the millions of Americans at or below the poverty line; those getting little or no education at our inner-city public schools; those unable to find a job to afford a livable home or decent healthcare; those whose jobs will be eliminated by artificial intelligence and robotics; those facing growing crime and violence within their communities; and those still suffering from prejudice, bigotry, and discrimination.

Tens of millions of Americans in pain who are desperately turning to the Democratic Party and its presidential candidates for answers and help with regard to poverty, lack of proper education for their children, the need for affordable housing and healthcare, crime, and discrimination.

But, to this concerned Democrat’s point, instead of having those real problems addressed and potentially solved, these Americans in pain are bombarded with ideological nonsense meant to appease the far-left wing of the Party and the movement.

Instead of answers to the troubles plaguing them on a daily basis, these suffering voters hear:

Now, leaving aside the fact that none of the Democratic candidates honestly intend to spend “trillions” to fight climate-change, and are offering up such outrageously silly numbers only as a way to avoid criticism and attacks from the “green warriors” on the left, it remains one of the actual main planks of the Democratic campaign for 2020.

The other major plank being: “We hate Donald Trump.”

As a campaign strategy, it is simple, easy to follow, and all but ensures the Democratic nominee will lose the election in 2020.

But, if one were looking for a smoke and mirrors scheme to keep the hundreds of millions of “President Trump is Evil” dollars flowing in for the next four years to certain news sites, liberal consultants, and Democrat-supporting groups, then the campaign strategy is foolproof.

Profit over the needs of constituents. Not unheard of in politics.