Douglas MacKinnon
|
Posted: Sep 04, 2019 8:16 AM
Share   Tweet
The opinions expressed by columnists are their own and do not necessarily represent the views of Townhall.com. 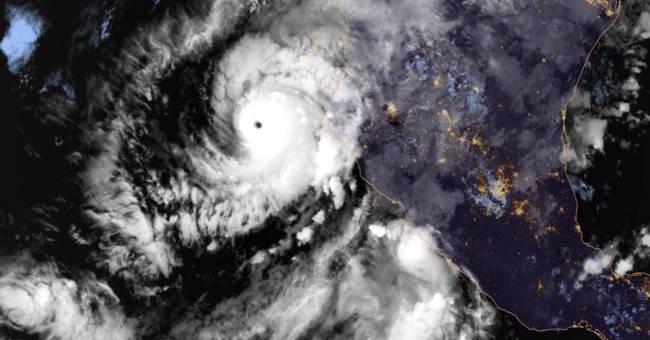 So said a Florida official I spoke with after he saw a headline saying hurricane Dorian was moving away from Florida and “…a bit more north than expected.”

“Expected,” he spit out. “Don’t they mean as they ‘predicted.’ They predicted a direct hit on Florida with a Category 4 Hurricane. They’re too gutless to even admit their own mistakes. Mistakes which cost lives with Irma and could have cost lives with Dorian.”

As these errors in predictions – and pathetic excuses -- continue to occur, now seems to be the perfect time to talk about the hype, politics, business models and created panic associated with “Hurricane, Inc.”

I say that as someone who lives in Florida and two years ago, had the eye of Hurricane Irma go directly over my home with 120 MPH gusts and blinding rain.

When Irma did appear two years ago, Rush Limbaugh rightfully questioned the motivations of certain media and weather sites with regard to their hype, accuracy, and ultimately, political motivations.

Before Dorian even came close to landfall anywhere in the U.S., many on the left were using the hurricane to politically target President Trump.

Tragically, as we have witnessed too many times in the past, hurricanes can be, and are, deadly storms which leave swaths of unimagined carnage and heartache in their wake.

It is for that reason that they should never be used to advance political or business agendas, or their tracks turned into a ghoulish guessing game for ratings.

All of which create undue stress and real panic in those who may be in the eventual path.

And yet, all three of those shameful scenarios happen with each and every hurricane.

There are dollars in those winds. Lots and lots of dollars.

Years ago, I sat down with the general manager of a major television news station. He flat-out described the evening weather forecast as the “cash cow” for the station.

He said their own internal surveys showed that viewers tuned in their channel for “weather first, sports second, and news, dead last.”

He admitted the seven-day forecast was “almost always wrong” but still put up for reasons of competition and ratings.

These same weather business and competition models apply to the major networks, cable networks, and newspapers. At one time or another, most are guilty of hyping hurricanes for profit.

Next, leaving the smearing of President Trump aside, the fact is, many on the left use the hype and potentially deadly destruction of hurricanes to push their particular global warming and climate change narratives.

No surprise since, just like the mainstream media, the entertainment world, and academia, the media club of meteorologists discriminates against conservative or even pragmatic and honest thought when it comes to their hiring practices.

If you don’t worship at the altar of their “Science is settled” on global warming narrative, chances are, you will never be hired.

Beyond that, we have the multi-colored spaghetti models slapped all over our screens every time a hurricane appears.

They, and the breathless forecasters pointing to them, do get our attention, but for all the wrong reasons.

The right reason being they are often wrong.

Disturbingly, the errors in these predictions can and do produce horrific consequences.

It has been well documented that the “catastrophic,” “Monster,” and “historic” winds hyped non-stop are regularly dramatically less when the hurricane makes landfall. And yet…why waste a click-bait marketing or political opportunity?

That particular etch-a-sketch of noodles proving hurricane forecasting is far from an exact science and often a joke…on us.

A forecaster on CNN was ultimately so bothered by the ever-changing predictions, that he called the models “horrible.”

Worse than horrible, they were irresponsible and deadly.

The entire east coast of Florida from Miami to Palm Beach was under mandatory evacuation orders. Millions of people were forced to flee creating great hardship for the elderly and the infirm.

Aside from the millions of taxpayer dollars spent to enforce the evacuation, there were numerous accidents on the highways with some resulting in fatalities.

Most alarmingly of all, many of the people who fled the east coast of Florida went to the “safety” of the Naples, Fort Myers area on the west coast.

Precisely where Irma made landfall and unfurled her full devastation.

As a weakening Dorian spins up the Atlantic and forecasters keep crossing out their previous predictions, we should never lose sight of the two major lessons regarding hurricanes:

The first being that all should be taken extremely seriously, and every precaution must be made well in advance of potential landfall.

The second lesson being that hurricanes must never be exploited for political reasons, monetary gain, or ratings.

Real lives are at stake and the human beings in the path of one of these killers should never be used as cheap theatrical pawns.