Douglas MacKinnon
|
Posted: Feb 23, 2017 10:30 AM
Share   Tweet
The opinions expressed by columnists are their own and do not necessarily represent the views of Townhall.com. 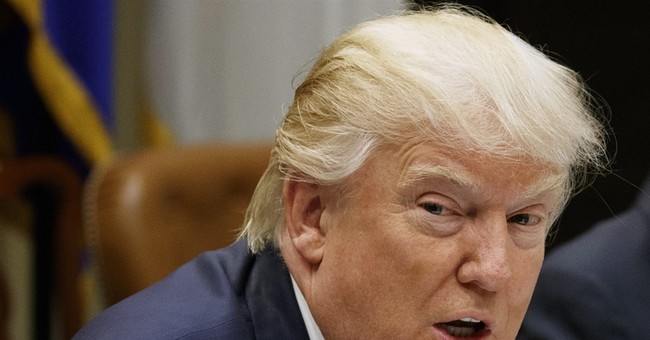 Over the weekend, I had a very long discussion with a friend who formerly held very high positions in the Democratic Party. A friend who strongly supported Hillary Clinton.

A friend who is also rational, pragmatic, and can think for himself.

Naturally, much of that discussion centered on President Trump and his first few weeks in office. Right up front, my friend said something that would have shocked most in the media and most in the Democratic Party: "Democrats in power behind the scenes whose job it is to win elections in 2018 are petrified of President Trump. Not because they buy into the hate-filled rhetoric of the far left, but rather because they realize he is baiting the Democratic Party and its allies into showing they are the party of intolerance and that his populist message is reaching a larger and larger audience. A message that will continue to peel away blue-collar Democrats and union voters to the point where the midterm election is going to be a nightmare for the Democrats."

My friend could not be more correct.

If anyone in the compromised media, the pundit class, or left-leaning academia removed the blinders of hate, rage, bias, partisanship and wishful thinking to look at the evolving situation in a cold, honest and analytical way, they might come to the same conclusion.

Not because I was brighter than anyone else, but five weeks before the election I began to send emails to several friends in the media and the business world predicting that Donald Trump would "get a minimum of 286 electoral votes, but ultimately 306 because he is going to win Pennsylvania."

At least for me, the reason I came to that conclusion began about a year before the prediction. It was then — a year earlier — that I had heard from a Democrat blue-collar friend in Massachusetts and a very conservative Republican friend from Florida independently saying the same thing: "You know, this Trump guy is starting to speak to me." He was speaking to them not because they necessarily bought into everything he was saying, but rather because, as Americans living paycheck to paycheck, they came to despise the entrenched establishments of their respective political parties and saw Donald Trump as their only hope to defeat a status quo that was destroying their future and more important, the future for their children.

Believing millions of those voices were out there — no matter how much the liberal media and these very entrenched establishments pretended they were not — I simply did a state-by-state analysis and factored in blue-collar Democrats who had to put the welfare of their families before one more cycle of sure-to-be-broken promises from their party and candidate.

What states did Romney win in 2012? What formerly blue states could be turned to Trump because of this unacknowledged working-class and blue-collar Democratic vote?

At least for me, Michigan, Wisconsin, Pennsylvania and Ohio jumped right out. Of course, Hillary Clinton bragging that she would put American coal miners out of work also played into the calculation.

Today, no matter if they are willing to go on the record or not, there are Democrats like my friend who, behind the scenes, are trying to make honest political forecasts based only on common sense and the facts and truths deliberately hidden by the mainstream media and far-left ideologues. These forecasts are showing that President Trump is connecting with more and more working-class Americans.

A "class" — in case the far left chooses not to admit it to themselves — that represents the vast majority of the American people.

And these pragmatic Democrats also are realizing that the something-for-nothing, PC-driven utopian-fantasy messages of the Nanny State are the real "fake news," and are falling upon more and more deaf ears.

More than all of that, the far-left ideologues in the Democratic Party, the media and their allies realize this truth. Which is why they are doing all in their power to try to delegitimize and destroy President Trump weeks into his presidency.

Common sense, independent thinking and honest analysis say they will fail. Working-class Americans are now on to them.