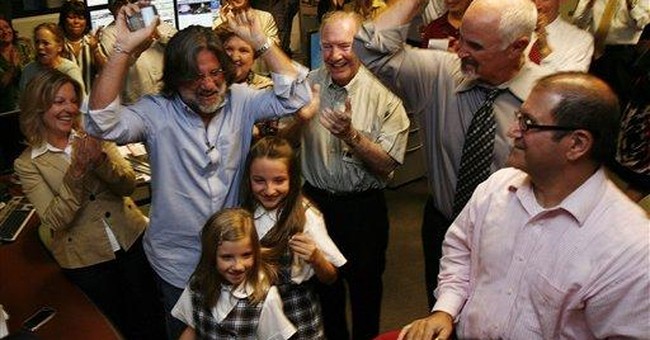 Pulitzer Prizes for journalism were just awarded and almost no one knew or cared.

Most Americans -- and even the “journalists” who seek these prizes -- have long-since realized that the prizes are awarded from a far-left Pulitzer committee to far-left “journalists” and writers. No one else need apply. As such, their luster, independence, and stature are a thing of the past.

“Conservative” journalists, columnists, and writers are shunned and openly discriminated against by the compromised individuals in charge of selecting the winners. Until the Pulitzer Committee at the Columbia Journalism School awards itself a prize for being “the most biased, unethical, and blatantly discriminatory committee in journalism,” it’s safe to say that the far-left prizes will continue to tarnish as they bring shame to what was once a noble thought.

Not surprisingly, the 2009 list of winners and nominees reads like a who’s who list of liberal “journalists” and writers. On the “journalism” side, the left-of-center New York Times claims the majority of awards with the left-of-center Washington Post, Los Angeles Times, Miami Herald and St. Petersburg Times grabbing a piece of hardware that simply confirms their bias.

The Pulitzer Prize for Commentary went to Eugene Robinson of The Washington Post. This would be the same Eugene Robinson who spends most his air-time on MSNBC trying not to get caught bowing and scraping before Keith Olbermann, as he rushes to agree with everything the mercurial cable host says least Olbermann throw a hissy fit and dispose of him the way he did with Robinson’s Washington Post colleague Dana Milbank.

Sensing a trend here, the 2009 Pulitzer Prize for Biography went to MSNBC contributor Jon Meacham. That would be the same Jon Meacham who has let Newsweek magazine become the propaganda arm of the Obama White House and the Democrat controlled Congress.

And the same Newsweek magazine that smeared the reputation of our military and our nation by falsely claiming that we killed 650,000 civilians in Iraq. The same Newsweek magazine that is about to go out of business because of the tens of thousands of Americans who have cancelled their subscriptions to a publication that long-ago turned it’s back on objective and honest reporting as it sought to serve a liberal agenda.

While it’s interesting to note the purposeless of the Pulitzer Prize, it should not be forgotten that this is still a committee that awards and encourages prizes for “reporting” that many in our military and intelligence services consider borderline treasonous.

As when The Washington Post was awarded a Pulitzer for revealing that the CIA was using facilities in Eastern Europe to interrogate known terrorists. Or, when The New York Times won a Pulitzer for compromising the top secret domestic eavesdropping program aimed at terrorists trying to communicate with sleeper cells in our nation.

With this ill-advised reporting, the far-left will tell you the rights of the terrorists were protected. Because The Washington Post and The New York Times knowingly and eagerly revealed information that undermined our national security, our intelligence operatives will tell you that an unknown number of terrorists escaped capture and justice.

As this yearly farce plays out, the Columbia Journalism School needs to either stop awarding the biased prizes altogether, or just honestly call them what they’ve become: The Pulitzer Prizes for Liberal Journalism and Writing.