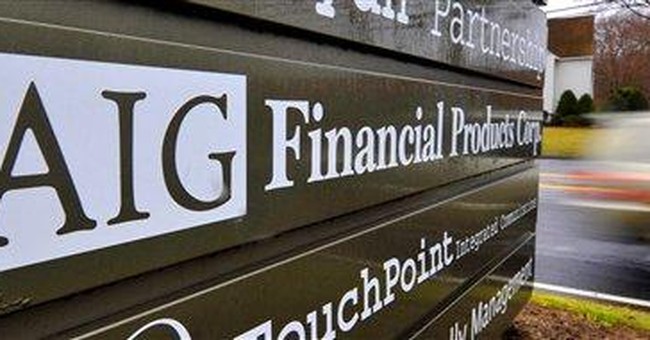 The enraged mob came to the doors of Congress in the dead of night with their torches glowing, their pitchforks raised, and their voices screaming for the blood of anyone from A.I.G. In response, 85 alleged Republicans from the House of Representatives threw them the rule of law, bits of our Constitution, and the legally binding contracts of fellow Americans as a way to not only appease the unbalanced anger, but as a cowardly way to ensure their self-preservation.

These Republicans, along with the predictable Democrats, voted to slap an un-American 90% punitive tax on the bonuses paid to any employee of a bailed-out institution with a household income higher than $250,000. It is for this reason and many others, that I now refer to myself as an “Independent Conservative” rather than a Republican.

Not only should the Republicans and Democrats who voted for this socialist inspired tax be ashamed of themselves, but for the good of our nation, every Member of Congress and the Administration should consider resignation so the American people can have a chance to put some adults in place before it’s too late. Has there ever been a point in our nation’s history when our government has been so leaderless, so spineless, or so clueless?

No one wants bonuses going to people who did not earn them or put us in peril. Beyond that obvious conclusion, it’s important to note that not everyone getting bonuses at these bailed-out companies were involved in cooking the books. Just as not every Member of Congress, this Administration and the past Administration, was involved in enabling the greatest economic crisis of our lifetimes. Only certain individuals. Should the salaries of those individuals also be federally taxed at ninety percent? Why stop there? Who else can we slap a socialist tax on?

Leaving aside the selfish, embarrassing, and transparent reasons for the House of Representatives pushed for this tax, there is a much greater reason to condemn the act. That being the personal safety of some of these financial employees. When you have Members of Congress themselves fanning the flames of hate that fuel the angry and uninformed mob, is it any wonder that these targeted American citizens are starting to wonder which country they live in or who they can to turn for protection?

Make no mistake. Employees of these companies -- labeled “Guilty by association” in the court of public and Congressional opinion -- are getting death threats. To the point where a spokesperson for A.I.G. said, “However someone may feel about the appropriateness of the retention payments, there is nothing appropriate about the threats that people have made to and about employees.”

When is enough, enough for certain Members of Congress and the media? Do some of these employees -- again, the vast majority innocent of the vile acts perpetrated by a few -- have to be burned out of their homes, injured, or even killed before they feel they’ve gotten their pound of flesh?

As this surreal process played out, one banker is quoted as saying, “It’s like a McCarthy witch-hunt. This is the most profoundly anti-American thing I’ve ever seen.”

Agreed. Who can rescue us from those pretending to rescue us?