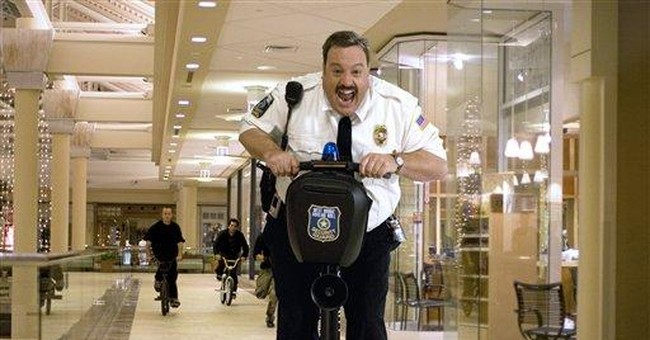 I confess to being one of the millions of Americans who have seen Paul Blart: Mall Cop since it opened on January 16th. More than that, I confess to having thoroughly enjoyed the film.

Having made that now public confession, Nathan Lee of The New York Times and Brian Lowry of Variety would have you believe that I am but a sad and unfortunate example as to why the unwashed masses should not be allowed to think for ourselves. How dare we derive pleasure from a movie elitist reviewers writing for a minute collection of fellow elitists have deemed prosaic, unimaginative, and beneath them.

In the world of writing -- not unlike that of sports or other businesses -- those who can, do, and those that can’t, become film reviewers who take perverse pleasure in tearing down the efforts of those willing to put their names, talent, and oftentimes, hard-earned money, on the line to create movies crafted to elicit any number of emotions out of the viewing public. How easy it is to never step into that arena and take potshots at those who do.

While the furthest thing from being an accomplished writer, I have authored a few successful books and novels (two of which have been optioned for films), by-lined a few hundred columns that have run in all of the major papers, and even have a couple of screenplays bouncing around Hollywood. Given that meager collection of work, I thought I knew enough to at least understand a bit of the written word. I thought I knew enough to understand and appreciate when a film was actually giving me a couple of hours of needed escape from the pervasive doom and gloom spread by most of the media in a desperate attempt to stabilize circulation or attract enough viewers to bring in the ad money needed to pay the salaries of the management who just fired some of their own unwashed masses.

I thought my life experience gave me the ability to not only think for myself, but to decide which films were worthwhile and enjoyable. One look at the reviews by Lee, Lowry, and most of the others posted on Rotten Tomatoes shows there is a serious disconnect between them, me and the millions of other Americans who have already seen the film. As I write this, Paul Blart: Mall Cop has been the number one movie in the country for two weeks in a row. Horrors. Clearly a sign of the Apocalypse.

Aside from belittling the film, Lee and Lowry seemed to share the same disgust that the mall in the movie was actually full around the holidays. Lee called it a mall “located in some economically vibrant fantasyland,” while Lowry said the film “should yield quickly diminishing returns after a more solid opening than most actual malls are seeing in this economy.”

Really? A quick question and point about their belief -- or insistence -- that based on the non-stop negative media narrative about the economy, the mall should be as empty in the film as they seem to think they are in real life. Do these reviewers ever step into a mall? Were they in any malls during the holidays? Are malls, like the films of Adam Sandler, Kevin James, and Rob Schneider, never seen or visited by the proletariat? Because, at least in the malls I was in during the holidays, were just as packed as the fictional mall in Paul Blart. As for that non-stop media narrative that the economic sky is falling, a top investment banker I know in London tells me that the media negativity is creating a self-fulfilling prophecy. Their reporting is contributing to and indeed fueling, some of the economic downturn.

Leaving that reality aside, the more pertinent question at the moment is, what would our nation -- or the world for that matter -- do without those who are convinced they are smarter, more refined, more well-read, and more entitled than the rest of us? If these people did not exist, would The New York Times, Variety and other media outlets simply implode? Would we really be the worse for their absence?

Different people like different films for different reasons. All should be respected. To the utter amazement and disdain of these reviewers, Paul Blart: Mall Cop has become a certified hit. Get over it. More than that, climb down from the Ivory tower from time to time and actually speak to those in line to see the movies of Adam Sandler, Kevin James, and Rob Schneider. If you do, you will find that you are speaking to a representation of the vast majority of the people in our nation.

Don’t worry. If you find it too traumatic or disgusting, you can always climb back up to your tower, take a shower, and then rip the next bourgeoisie movie that offends your lofty station in life. In the meantime, I’ll be anxiously awaiting the sequel to Paul Blart: Mall Cop.