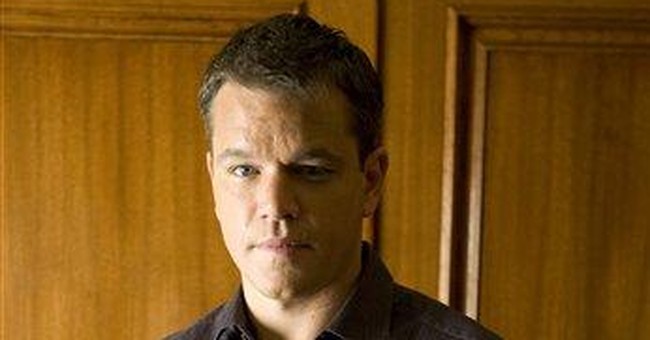 Matt Damon, the private school educated, former rich kid turned actor, turned Harvard drop-out, turned major Hollywood liberal celebrity, turned intellectual snob, is (along with the rest of the far-left intelligentsia) looking down at his nose at the small town, public school educated Sarah Palin and the rest of the unwashed masses who might -- to the horror of the celebrity Obama supporters -- actually decide to support one of their own.

In an Associated Press (also in the tank for Obama) television interview that was posted on the highly influential Drudge Report, Mr. Damon can be seen churlishly denigrating Governor Palin and her background. At the beginning of his rant, he inadvertently pleads guilty to ignorance by saying, “I don’t know anything about her.” Hey, why let the facts get in the way of good character assassination?

Damon does not disappoint. From his Ivory Tower of obliviousness, he proceeds to insult the real-world executive experience of Sarah Palin. With a face of disgust akin to a Boston-Brahmin being told that the hired-help needed at least one day off per week, Damon says, “I know she was Mayor of a really small town and Governor of Alaska.” His emphasis on “really” and “Alaska” could suggest that to the celebrity actor, unless you come from New York, Los Angeles, or Cambridge, you couldn’t possibly count.

After that, he goes on to use words like “scary” and “terrifying” to describe the prospects of a Palin presidency. He gets into the Palin presidency because -- like every Obama supporter reading from the campaign talking points -- he alludes to the “frail” condition of John McCain and the all but certainty that he won’t survive his first term. Hence, “President” Palin.

While Mr. Damon continues to play the role of a dutiful surrogate for the Obama campaign, I’m wondering if he might take a moment away from his admitted unenlightened pronouncements, to honestly compare the elected experience of Barack Obama with that of Sarah Palin. Should he do that, he would find that while Palin was running a state with a $12 billion per year budget and 24,000 employees, Barack Obama had settled comfortably into his job as a professional candidate. He would find out that while Palin was taking on Big Oil, had taxed the companies, fought corruption, and given a $1,200 check to every citizen of Alaska, Barack Obama was still just running for office. Didn’t the good people of Illinois elect Obama to actually be a senator and not just play one in his campaign commercials?

Another self-described liberal actor once said that what bothered him most about some liberals was that it was not enough that they disagreed with conservatives or Republicans, but that ”they had to hate them and hate everything they stood for.” I don’t hate anyone and I certainly hope that Damon has not fallen into that destructive mindset.

The fact of the matter is that I’m a fan of Damon’s acting ability. As someone who grew up on welfare and in abject poverty in and around the Dorchester neighborhood of Boston, Damon’s movie “Good Will Hunting” spoke to me on a number of levels. While for him, it may have just been a way to assuage some of the guilt for growing up privileged, for me, it was part of my life. Rich kid or not, it displayed talent.

Through that talent, connections, and perseverance, Matt Damon has elevated himself to a position of influence in Hollywood and with the fringe-left. But with that influence, comes a degree of responsibility. Responsibility number one being to know what you are talking about before you criticize a woman you know nothing about. A woman, a wife, a mother and an elected official, who at the end of the day, has much more in common with the vast majority of Americans, than an actor -- or a candidate -- who attended Harvard, and went on to discount small-town traditional values.

Sarah Palin has done nothing to deserve his misguided loathing.