Doug Giles
|
Posted: Apr 10, 2016 12:01 AM
Share   Tweet
The opinions expressed by columnists are their own and do not necessarily represent the views of Townhall.com. 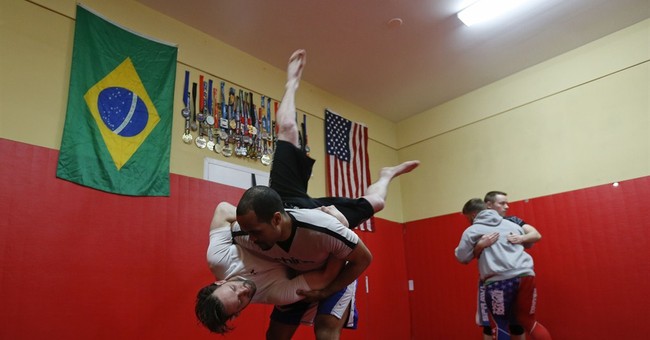 Trending
While everyone’s writing this weekend about which candidate sucks the least for 2016, my pen’s pointed on the murder of UT freshman Haruka Weiser and what young women can do to mitigate the chances of that ever happening to them.
For those not hip to what happened to Haruka, here’s the breakdown:
Haruka Weiser, 18, from Portland, Oregon, was a first year theater and dance student at The University of Texas in Austin.
Weiser was reported missing Monday morning by her roommates and was found dead Tuesday in a creek that runs through UT’s campus.
Haruka had been walking back to her dorm from the drama building on campus when she was assaulted, then killed.
On Friday, Austin police arrested Meechaiel Khalil Criner, a black, seventeen-year-old, homeless, six-foot-tall punk and charged him with first degree murder.
Poor Haruka. A gorgeous, eighteen-year-old girl with big hopes and dreams gets raped, has her life snuffed out and is then dumped in a damn creek by some homeless, teenage, drifter toad.
If found guilty, I hope Meechaiel is slowly and painfully executed in the great state of Texas where we do not coddle criminals. Call me carnal.
Regarding Haruka’s parents … I cannot begin to fathom what they’re feeling. I know my wife and I would be inconsolable.
Murders like Haruka’s, and the thousands of other females who’ve been abducted, rape and/or killed, is why I insisted both my daughters, at an early age, train in jiu jitsu and know their way around handguns, shotguns and rifles.
CARTOONS | Al Goodwyn
View Cartoon
When our girls started out training, some of our lame neighbors and their lame kids thought I was “crazy” to “make” my sweet daughters learn how to fight and shoot.
Crazy? Me? Well, I guess I am if you mean crazy like a fox.
Indeed “crazy Doug” is now a very comfortable fifty-three-year-old grand-dad because both of my girls, after 15 years of training, have Valente-Gracie black belts; and OMG could they double tap the center mass of any jackass that would accost them.  To this day, they continue to train in jiu jitsu and with various other weapons. Personally, I wouldn’t mess with either of them and I can’t tell you what kind of comfort that gives me as their old man.
That said, I would be even more thrilled and comfy, if the parents of young lasses started mañana and enrolled the apple of their eyes into some form of self-defense, because in this effed-up day, no one is safe. And unfortunately, I see no foreseeable break in the violent entitlement weather pattern.
Until that day when the lions lay down with the lambs, consider and practice the following to keep you and yours out of harm’s way:
1)Realize that, “Yes … it could happen to you.” It sucks to think about something this grim, but we all must. We all love to think, “It won’t be me or my kids”; and more than likely… it won’t be you or yours but … you … never … know. That’s why we have to be trained and equipped to deal with the chance that this kind of crap could, indeed, actually happen.
2)Wherever you go, keep your head on a swivel. Call me paranoid, but I scrutinize every environment that I’m in and I mean every environment. Tattoo “Mad Dog Mattis’ “ motto on your brain, namely: "Be polite, be professional, but have a plan to kill everybody you meet." Also, when you’re in public, and this will be a hard one for your daughters, but stay off the phone and quit texting. When your head is down and you’re not looking around, that’s when you get hit. Also, when in public take the headphones out of your ears. You never know if you’re being hunted and you need all of your senses engaged in case it’s you that’s in the enemy’s crosshairs.
3)Trust no one. And I mean, no one. Especially, if you’re a petite ballerina getting approached by a six-foot homeless weed. I’d rather be alive and considered rude than dead and considered nice.
4)Do not go out alone. There’s strength in numbers. Period. Watch NatGeo if you don’t believe me and notice how lions kill the majority of their prey. What you’ll see is usually they single out the weak one that’s separated from the herd.
5)If you’re feeling fear, there’s a reason for it. Nature has so hardwired us to sense when we’re in danger. Ignore that sensation to your own peril. While you’re at it, get Gavin De Becker’s book The Gift of Fear.
Lastly, and pardon my redundancy, but choose some form of martial arts and learn how to get away and/or kill someone who intends to do you harm. In my dream world, the good girl should live and the bad guy should die.
If you’re interested in exactly how we raised our young ladies, check out my book Raising Righteous And Rowdy Girls.