Here’s Why Islam Wants Our Heads -- In THEIR Own Words 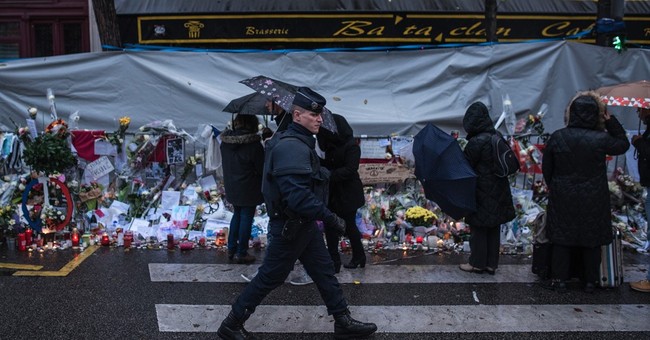 The other day I was talking to an acquaintance of mine at the gun range about the Paris terrorist attacks. What he surmised was the root cause of that senseless slaughter by Islamic radicals nearly made me drop my Sig Sauer on the range floor.

The Texan told me that he believes Islam wouldn’t be killing innocent peeps as they ate their dinner or enjoyed a death metal concert or watched a soccer game if said nutters had more “job opportunities”.

What he said was shocking to me because of two primary things:

2). Someone really thinks if Ahmed was a barista at a Starbucks in Babbila that alone would make someone stoked on the 7th century murderous ramblings of a pedophile who believed God personally talked to him chill out regarding ill-will towards us “infidels”.

Matter of fact, I think that particular job would actually make things much worse because he’d be all jacked up on caffeine and everyone would make fun of him for working at a Starbucks which would lead to … well … um … uh … more … ka-boom!

Indeed, many on the Left are still left wondering:

1). Why is Islam attacking Europe and America?

2). Is it because they feel unloved and so lonely?

3). Is Islam getting really tired of seeing Katy Perry’s constant display of her ample assets?

5). Is Islam not actually attacking us and it’s merely a few rogue scalawags that have hijacked what Obama calls a 'beautiful religion?'

Are one or more of the aforementioned the reason(s) why they're out of sorts with the West?

Many Europeans think that in order to get Islam to stop killing them they should open their borders even wider to their “refugees”, stop eating bangers and mash, tell Katy P to cool it with the cleavage and ban all male hair pomades. Especially those with the satanic “high shine” and “heavy hold”.

While a lot of Leftists, primarily, are getting wrapped around the angst axle wondering why Islam is in defcon mode with The West, and are thus changing their laws to accommodate Islam, being politically correct, banning Jello and the smell of BBQ, hoping that such concessions will get radical Muslims to calm down, I say we examine why they say they hate the West and are out to kill us.

Wes Walker, my buddy and religious editor over at my website ClashDaily.com, did a little poking around after the Paris attacks and found out that the reason why the Islamic State killed 100-plus and wounded hundreds of others was not because of political, economic or cultural reasons but were, instead, explicitly religious reasons.

Here’s Walker’s findings and his comments. Check it out:

When claiming responsibility for the Paris attacks IS said: “In a blessed battle … believers … set out targeting the capital of prostitution and vice, the lead carrier of the cross in Europe — Paris” (Quote in context here).

Two very specific points are made. They are attacking what they see as moral corruption, and they are attacking a city that — however untrue it may be today — historically, was very much associated with Christianity.

We love to point fingers at the Crusades, that they were a great historical evil, but neglect the wider context that Western armies were called upon in response to Islam’s aggressive Empire-building, militarily swallowing up of areas that were the seedbed of Christianity.

In previous generations, Europe was the breakwater that the waves of Islamic expansion crashed against before being turned away. Not so now. And that statement by the attackers sheds some light in it.

Previously, Europe resisted two pitfalls. We were not fully conquered — even when their military held the advantage — and more importantly, we were not assimilated. We were not, despite the fact that Islam’s dhimmi laws echo Secularism’s approach to rival religion in the public square -- suppression of traditional belief, and actively inviting, and rewarding its abandonment.

We were able to resist, because we held to something that defined us, called us to virtue, courage, endurance and hope. That same “something” was actively undermined by Enlightenment philosophers, and -- in Paris itself — saw a bloody purge during the Reign of Terror.

That “something” (historical Christian faith) was replaced with a variety of -isms, some of them religious, some of them political, others a more basically hedonistic grasping for money, pleasure or power.

So, when reporters gloss over the song that was playing when the slaughter began — “Kiss the Devil” — they overlook the very impetus of the attackers.

They believed themselves the righteous, purging the world of evildoers. They do not distinguish between the paganism or the Christianity of the West, believing the former to be part of the latter.

They attack us, because they still see us as the Great Enemy we once were, the same one that pushed back their empire, retaking Spain and Southeast Europe.

Our resistance is now feeble, in part, because we no longer know who we are, or for what we stand. We’ve jettisoned our values, and replaced them with Politically Correct platitudes.

And so, now that we’ve identified the moral vacuum, what will we do about it?

So, after reading Wes’s assessment and the killers’ own admissions of their motivations for the massacre in Paris, do you guys still think that more jobs, being PC with our beliefs and speech, and opening wide our borders to their hordes will get them to chill with their Islamic ill-will?