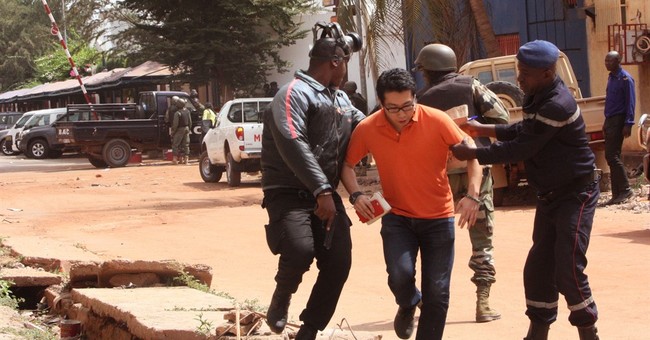 When I see videos of bug-eyed Muslim dorks strafing cafes and concert halls in Paris, and then I see videos of Obama, Kerry, Hillary and MSNBC’s PC-punks scared crapless to even mention that they’re Islamic terrorists, I get a real … bad … feeling.

Our willfully blinded, and thus complicit, President, plus our politically correct culture, is setting us up to be b-slapped by Muslim death dealers who are being wet nursed in Islamic death cults, fueled with 7th century horse-scat, who are feasting feverishly on a steady diet of Anti-American animus.

Indeed, for the doe-eyed daft among us, who still don’t, or won’t, get it yet, these Muslim boys who currently reside across the sea (and some across your street), whom Obama also intends to import by the hundreds-of-thousands to a town near you, are out to erase us.

Yep, I believe they’re going to hit us hard, I’m talkin’ real hard, if we don’t wake up and get a pro-American, kiss-my-ass-and-die attitude back into our national warp and woof.

Here’s the rub for moi: Muslim young men dig jihad and our President and country love tripping over ourselves to not upset these death dealers while obsessing on #Mizzou made-up minutiae as they keep up with the Kardashians.

To put it another way … Al Qaeda operative Maulana Inyadullah said succinctly, “[Americans] love Pepsi, and we love death.” To which I would add: we also adore “political correctness” and the cosmically inconsequential.

I believe that if we, as a nation (especially young adults), don’t toughen up a bit—and do it quick—we’re not going to have the long-term stuff to cudgel off these persistent, un-evolved, demonic zealots.

Indeed, as I begin to stare at my 53-year mark and try to see down the road regarding the land my girls and their kids will inherit, I begin to shake like Shemp did when he didn’t have any cheese at the real possibility of the end of this great American experiment in self-governance.

I believe our increasingly effeminate culture doesn’t stand a long-term chance in hell against Muslim mayhem—unless we beef up a bunch and get back some of the now-endangered American resolve. And that goes for every American—whatever your politics, sexual bent and musical taste.

Yep, if we don’t recognize and realign spiritually, physically and politically to stave off these Islamic zombies, then within 50+/- years we will be another head on Muhammad’s trophy room wall.

Don’t believe me? Look across the pond. Europe is history as far as their heyday goes. With diminishing birth rates and a thinning of skin, and an open border to Islamic bullshizzle, it won’t be too long before the EU is Islam’s prison chick . . . mop head wig, lipstick and all.

Having run out of analogies, adjectives and time, let me put this to you in a song I wrote (to be sung to the tune of “Imagine,” by John Lennon).

Imagine there's no Country & Western
It isn't hard to do
No baseball or hot dogs
As far a freedom goes, we’re screwed
Imagine all our pretty girls