America: Land of The Banned And Home Of The Thought Slaves 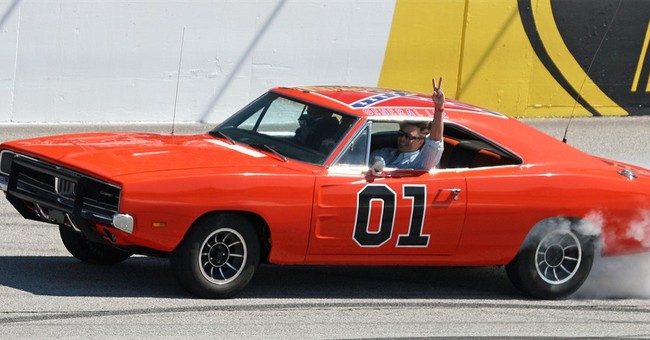 Last Thursday I returned from two weeks in Africa only to be fish-slapped with the fact that gay marriage is now law and The Dukes of Hazzard has been banned. Way to drop the ball while I’m out hunting.

By the way, I shot a massive, old male lion. Someone tweet that to snaggle-toothed Ricky Gervais and let’s watch him try to get me banned. Have him send his vociferations to me at dougl@kissoff.com . Gracias.

I, for one, hate this pusillanimous glide path brought on by the uber -sensitive thought police.

Nowadays, if the “tolerant” Left doesn’t like someone or something, then dammit … ban it. This type of control is kind of reminiscent of the psychological vice-grip applied to the Germans by Adolf in Nazi Deutschland.

Now, before the reflexively irate critic starts to lambaste me for hypocritically bashing banners because I’m a conservative and against gay marriage, let me unequivocally state that I’m not against gay marriage. Nay… for the record I’m pro-gay marriage as long as you don’t call it marriage, I don’t have to pay for it and it’s only between two good-looking lesbians.

Speaking of gay marriage, don’t you know that divorce lawyers love this soon-to-be-new, massive client base that’s about to lavishly line their soulless wallets? But I digress…

Let me see if I get this right: because some demonic dipstick shot up a church, and had a confederate flag; The Dukes of Hazzard is now banned?

Someone help me. Is this TV Land's line of reasoning?:

Dylann Roof is a murdering racist.

Dylann Roof had a confederate flag.

The Dukes Of Hazzard ’s car has a rebel flag on it.

Therefore, The Dukes Of Hazzard is evil?

If that is true, then so is the following…

Evidently, the execs of TV Land are pretty crappy at syllogisms because I have no idea how they arrived at the conclusion that Bo and Luke Duke’s car is an evil influence based upon some dillweeds’ penchant for a particular pennant. I have three words for TV Land's deduction: Whiskey. Tango. Foxtrot.

I guess Sanford & Son will be next on the chopping block because Fred relentlessly ragged on the hulking, mean and nasty Aunt Esther and, you know, because of proximity, Michelle Obama will have none of that.

Personally, I like the old, rowdy America where freedom of thought and speech reigned supreme and a respectful difference of opinion was viewed as a good thing and we weren’t fascistically forced to parrot or accept stuff shoved down our throats by the Nanny State or rabid special interest groups.

But then again … that’s just me being a rebellious jerk.