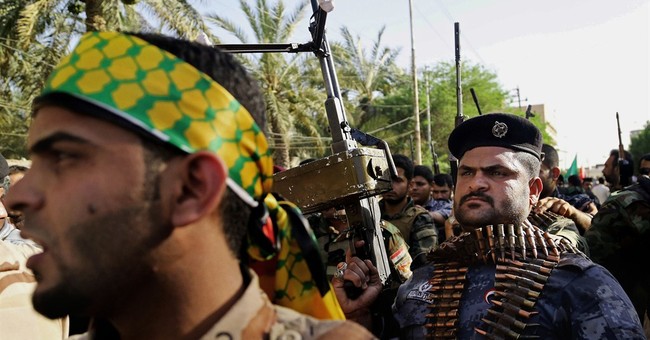 Man, don’t you love how Obama and his soft-brain disciples have made Christians out to be fish-stickered, bug-eyed equals to incensed Islam? If you were to accept what the White House says about Christians you’d think the Church is chomping at the bit to chop off some heads of unbelievers.

Yep, if you were to believe the barf belched out by the BS brokers on the ludicrous Left, you’d stagger away stupid with the belief that there is little disparity between caring Christians and militant Muslims.

As a matter of fact, you probably would be bamboozled into believing that Islam is a peaceful, Little House on the Prairie religion being temporarily hijacked by Jihadist renegades, and Christianity … Christianity is the real vicious, charity-vacant cult that’s vying for the opportunity to seize the whip and whip us good.

According to Obama and his oglers,

1. If you enjoy singing How Great Thou Art and Amazing Grace – you might be a terrorist.

2. If you watched The Bible on the History Channel and thought it was badass – you might be a terrorist.

3. If you believe it’s wrong and ungodly to hijack airplanes and jam them into skyscrapers full of innocent people – then you might be a terrorist.

4. If you think Billy Graham has been a great gift to our nation – you might be a terrorist.

5. If you celebrate Thanksgiving, Christmas and Easter – you might be a terrorist.

6. If you made the day you got saved your birthday on your Facebook page verses the day you actually popped out of your mama’s bottom – you might be a terrorist.

7. If you give money towards the preaching of the gospel and to works of charity – you might be a terrorist.

8. If you love your neighbor as yourself – you might be a terrorist.

9. If you recognize, appreciate and wish to pass on to the next generation America’s godly heritage – you might be a terrorist.

10. If you like the Declaration of Independence, our Constitution and the Bill of Rights – you might be terrorist.

11. If you have Jesus Take the Wheel on your iPod – you might be a terrorist.

12. If you believe Jesus is Lord and not the state – you might be a terrorist.

13. If you raise your kids to be productive, independent and righteous kids who love God and our country and not be narcissistic entitlement hookers – you might be a terrorist.

14. If you believe love is patient, love is kind. It does not envy, it does not boast, it is not proud. It does not dishonor others, it is not self-seeking, it is not easily angered, it keeps no record of wrongs and does not delight in evil but rejoices with the truth – you might be a terrorist.

15. If you believe the Golden Rule is a pretty legit tenet to live by – you might be a terrorist.

16. If you have a fish sticker on your mini van – you might be a terrorist.

17. If you take umbrage that you would get pitched as a terrorist because all of the aforementioned Christian stuff – well … you might be a terrorist.

Yep, Obama's reality stylists are working their butts off trying to convince us TV-addled cattle of two primary things: 1) Violent jihad is not based on the Koran, and 2) All conservative Christians are theocrats ready to burn someone at the stake, stone Katy Perry in a nearby gravel pit and governmentally ramrod Christianity down everyone’s pie hole.

I haven’t seen this kind of ham-fisted, farcical façade foisted upon the public since Michael Jackson tried to make out with Lisa Marie in an attempt to convince us all he’d found true love in an adult of the opposite sex.

Look, there’s no denying violent things have been done by the Church and in the name of God, but that has been the exception and not the rule. In addition, when the Church has spent time with its head up its butt doing bogus things, the Church’s leaders have historically owned it when wrong, have not repeated the gaffe, have grabbed the wheel and have effectively steered saints out of any erroneous, detrimental ditch.

Not so with Islam.

In Robert Spencer’s book, Religion of Peace: Why Christianity Is and Islam Isn’t, Bob shows those who can still be shown anything factual the massive and fundamental differences between Islam and Christianity. They are not equal no matter how much the blatherers of political correctness purport them to be. Their beliefs are not similar, nor their practices, nor their means of spreading their message—and to think otherwise could cost you your ass.

Spencer points out the crystal clear facts that clash with the current anti-Christian hype, such as …

· Most Muslims do not condemn jihad.

· Christianity and Islam have neither similar traditions nor similar modern realities.

· Christian religious violence, real or imagined, does not mitigate the reality of jihad.

· A “Christian theocracy” in America is a figment of the Left’s imagination.

· The Islamic world has never developed the distinction between religious and secular law that is inherent in Christianity.

· The Koran does not invite interpretation, and Muslim leaders refuse to discuss how to fit their beliefs into modern society.

· Youtube flicks, Political differences and unwanted international interference are not, in fact, the cause of the turmoil in the Middle Eastern antagonism toward the west.

· Jews, Christians and peoples of other faiths (or no faiths) are equally at risk from militant Islam—especially gays and women.

· The most determined enemies of western civilization may not be the jihadists at all, but the leftists who fear their churchgoing neighbors more than Islamic terrorists.

Listen, 21st century truth reconstructors … you’ve gotta relax. Please do us all a favor and go get healed from your bad Sunday school experience and lay down your church-grinding axe. Thinking people aren’t buying the “Christianity = Islam” smack.

Get real, Goofy. You and I both know that regardless of what a few loopy CINOs (Christians in name only) have done via violence in the name of the Father, it’s not in the body of Christian doctrine to hack off the noggin of the obstreperous.

So chill, you shrill shredders of Christianity.

On the flip side, it is within the pages of the Koran to convert, conquer or kill non-Islamic people. And I’m a thinkin’ that no matter how much you work to besmirch Christianity and misinform the public on behalf of militant Islam, that if said Muslims had it their way, you would be a deceased grease stain on God’s green earth.