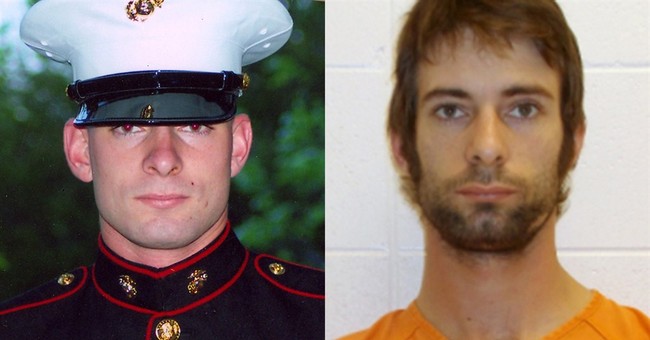 Jury selection for the trial for Eddie Routh, the man who killed American Sniper Chris Kyle and fellow Navy SEAL Chad Littlefield, is supposed to begin this week in Stephenville, Texas.

For months we’ve been hearing that Eddie suffered from PTSD and that the VA is to blame for not getting him on potent enough dope, or too-potent dope; and failed to farm him out to an exorcist to have his war demons banished forever; and thus, the VA is the reason Eddie snapped and killed an American icon and his fellow SEAL friend.

Heck, I’m surprised we haven’t heard “The Low Blood Sugar Excuse” tossed out there as the reason Routh killed Kyle: “Eddie, you see, has low blood sugar, and if he‘d had a Snickers, Chris would still be alive.”

Or… or… “Eddie could have also killed Chris and Chad because his third grade teacher never called on him during class when he raised his hand, and that wounded his inner-child, and that’s why Eddie murdered two stellar and innocent soldiers who were trying to help him.”

Why not parlay those excuses as well? The aforementioned makes about as much sense as the PTSD defense that’s been batted around on Eddie’s behalf. A pretext, mind you, that is currently getting severely hammered by the Warfighter Foundation.

Eddie Routh served one tour in Iraq in 2007, at Balad Air Base (the 2nd largest U.S. installation in Iraq), with no significant events. No combat experience. Let me say that again, he NEVER SAW COMBAT or any aspect of traumatic events associated with a combat deployment (i.e. incoming mortar or rocket fire). He never left the base, EVER.

The Warfighter Foundation, a nonprofit veterans group, filed a Freedom of Information Act request to obtain information about Routh’s service record. It was through the information they received that the group discovered Routh had not experienced any type of combat.

Matter of fact, the base that Mr. PTSD was stationed at was pretty cush.

Joint Base Balad benefited from some of the best facilities. It was almost a luxurious installation. The military troops had access to swimming pools, dancing lessons, a movie theater, American restaurants and snack bars. The housing facilities were just as advanced. The facilities were probably some of the most important factors that drew the celebrities and officials’ attention during their visits.

Garsh … that’s enough to push even the strongest amongst us over the edge and compel one to murder innocent friends who’re trying to help you out, right? No? Yeah, I guess you’re right. Sounds like BS to me, also. However, maybe Eddie imagined, like Brian Williams, that he was actually in war, when he wasn’t, and that’s how he got PTSD. That’s a possibility…

Another interesting twist in The PTSD Eddie Routh Ruse came from the laptop of Walid Shoebat last week. Walid, an expert in all things Islam, points out some interesting and very overlooked ditties about Eddie.

Check out these interesting, and Islamic, nuggets from Walid…

When we evaluate cases for potential Muslim terrorists, we always look for physical signs like a trimmed mustache and a beard that is lesser trimmed. And when it comes to a crime that was committed, we look at who the victims are. In the story on Eddie Routh who murdered Chris Kyle, there are signs of concern, especially the facial hair, it does match the profile of a convert.

Also, Routh was a prison guard over Muslim terrorists at Balad Airbase in Baghdad in 2007. He never served in battle, but spent most of his time looking and talking to Muslims in jail. He could have likely interacted with the inmates and got converted; prison has a higher conversion rate than any mosque. Also, why would he kill a Navy SEAL who was known to have killed so many terrorists? [Especially, given that Kyle had a price on his head?]

Examining [Kyle’s] killer gives also clues. “During a phone call with his father, Routh expressed sympathy for the detainees and discontent over how the US was conducting the war as well as his reluctance to engage in combat” and “While working as a guard at Balad Air Base, Routh laments his [Muslim] prisoners’ poor living conditions”.

Let's sum up Shoebat’s alarms: Routh spent a lot of time and sympathized with Islamic radical prisoners and was sporting the no-mustache-with-beard Muslim facial hair when he came back and killed Kyle.