Responsible Parents Should Teach Their Kids How To Use Deadly Force 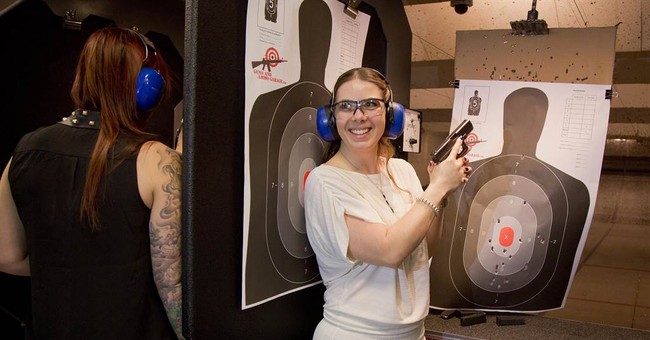 The following was taken from my bestseller, “Raising Righteous And Rowdy Girls.” I thought it was apropos given the anti-gun hysteria that has ensued since the Uzi accident. Here's how I prepped my girls growing up should the crap ever hit the fan and they needed to defend themselves with a gun. Enjoy.

The carrying of a deadly weapon and the ability to have within your hand the wherewithal to remove a person from the planet is a sobering cup of Joe. I know you’re thinking, “Why, thank you Captain Obvious. I wouldn’t have seen that if you hadn’t pointed it out to me.”

Because the topic of sending a felonious wanker to an early grave is indeed grave, you need to sit down with your daughter and ask her this question: Would you shoot to kill a person if they were going to do you or others physical harm? Because, duh, that’s the whole point of carrying a gun. She should have the attitude that, “I dont want to use it but should I have to I’m mentally prep’ed.” If she’s not psychologically “there” then you sure don’t want to put a gun in her hands because it not only is useless (as she will not use it for what it is intended for, namely to kill a bad guy), but it also could be snatched out of her hand and used against her.

So, first things first, father: If your girl is going to carry a weapon or have one in her house, then she had better perform the proper mental gymnastics necessary for her to move into Dirty Harry mode if things should go to hell in her presence. There’s no time for contemplation in such a situation. When the smack hits the fan, it happens fast. Is she ready?

If your daughter cannot see herself actually using the weapon she is carrying then she has no business having a piece on her person. Yep, she had better stick with knowing martial arts or sporting a Taser C2 or having Cujo go on the defense for her against the obstreperous because the prerequisite mindset for the serious gun owner is: I have no problem using it if a stupid, stupid felon forces my hand.

For those girls who have made the leap into the “I’ll turn him into worm food and not bat a false eyelash” mode, let’s talk about guns. This is one of my favorite topics: discussing with good folks the proper personal weaponry to sport so that they radically decrease the likelihood that they will ever be victimized by a dumb dude trying to hurt them.

Dad, before you get your girl a gun, take her to a gun store or a gun range where they have several calibers, makes and models to choose from and have her try all the ones that are made for self defense.

Start her on the small end of the caliber spectrum okay, Rad Magnum? It won’t help things if she’s christened with a .500 S&W, .454 Casull or a .50cal Desert Eagle or an Uzi. She’ll develop a flinch worse than the one I have when I see Pelosi without makeup. Personally, I’d start her with a little .22 and have her build up to the .38 and 40 calibers.

Let her run through the semi-autos and revolvers to see which one she digs the most. Most first time femme fatales will go for the revolvers because they’re pretty much a fluff and fold weapon as the automatics, for most novices, are just a little more complicated. Having said that, see which one she takes to. Remember, this is her gun, not yours, and the most important thing is her having a pistol that she is extremely comfortable with.

As most of you guys know, figuring out what a woman wants is more difficult than trying to get Donald Trump to watch Rosie O’Donnell River Dance naked. Having a-one-size-fits all approach to arming your ladies is not wise. Let them report. Let them decide.

For example, every one of my ladies likes a different pistol. My wife is sweet on my AirLite Smith & Wesson .357 magnum revolver, but only with the .38 Special rounds. My oldest daughter takes a shining to my Sig Sauer .380 automatic, and my youngest daughter freaks over the Springfield .40cal auto. Go figure! It’s your job, dad, to get them what they can handle and shoot with the greatest of ease. Trust me, for self-defense purposes, you want their comfort and confidence levels through the roof.

Once the caliber, model and action are decided upon now it is time to shoot and shoot and shoot and shoot. For attack scenarios it’s not necessary with a handgun for them to practice shooting targets at 1,000 meters. My law enforcement buddies say that in serious altercations the victim needs to be able to deftly deliver three shots in three seconds at three feet: 3-3-3 (I told you when “it” happens, it happens fast).

Therefore, go to work at close range and with rapid fire. If, God forbid, your baby gets into deep weeds, you want her to do the job properly; e.g., triple tap the center mass of the murderous/ raping jackass. At least double tap it. Two or three shots in the center of the chest should officially end the happy day of your kid’s enemy. Work with her ‘til she’s proficient in firing with both speed and accuracy. Help her to keep her shots tight, fast and not all over the map. Get several human silhouette targets and have her shoot for the center of the chest and keep her shots within the heart/lung area. To be effective in defense scenarios her gun skills must become second nature, and this comes only through practice, practice and practice.

Once she has attained confidence and crazy capability, go with her back to the gun range/store and have her get a concealed weapons permit. With this she will be able to defend herself with deadly force almost everywhere she goes outside of her house. Speaking of her house . . .

Y’know, small pistols are great for your person. However, for home defense you can step things up a notch. You don’t have the concealed weapon problem when protecting yourself and your castle. Here’s where the ultimate crime stopper comes into play: the shotgun. Same thing applies here, pops, as to her choice of scatterguns. Get her the one that she likey.

The best bang for the person’s buck is the 12 gauge pump shotgun with an extended magazine. Most of your major manufacturers have one of these beauties available for the consumer. The barrel is short, 18.5 – 20 inches, the magazine is long, most will hold 6-8 rounds, and the damage is huge to whoever is on the receiving end of this blast. A shotgun, unlike a high power rifle or pistol, delivers a big hole to the body of a bad dude, and if you use bird shot (7 ½ or 8s) it won’t over penetrate walls and hurt innocent people in other parts of the house. Just the noise of your daughter pumping a shell into the chamber will send the worst of culprits fleeing.

Last But Not Least: Gun Safety and Storage

Always keep the gun pointed in a safe direction. This means always. Do you know what always means? If for some reason you’re dazed and confused to the definition of always, here it is: every time; on every occasion; without exception. The “safe direction” is determined by, hello, the safest direction. You must, must keep the front of the barrel pointed away from anything you do not want to kill, at all times. Pay attention: Handling real guns is no game. There have been plenty of “unloaded” guns that have “accidentally” killed people who were just “playing around.” Do you understand point one? If not, you should never own a gun.

Always keep your finger off the trigger until ready to shoot. When you are holding a gun, rest your finger on the trigger guard or along the side of the gun. You must practice not going to the trigger 100 times before you go to the range to shoot. You need to have this commandment drummed into your head. It must become a natural reaction when you pick up any kind of weapon. No “f-i-n-g-e-r on the t-r-i-g-g-e-r” ‘til you’re ready to fire in a safe direction. Period. It is pretty frickin’ impossible for that gun to go off if the trigger is not pulled. Therefore, until you are actually ready to fire, do not even think about touching the trigger. Are we clear on this point?

Always keep the gun unloaded until ready to use. Whenever you pick up a gun, immediately engage the safety device if possible. Assume that the gun is loaded and treat it like it is loaded. If the gun has a magazine, remove it before opening the action and looking into the chamber(s) which should be clear of ammunition. If you do not know how to open the action or inspect the chamber(s), then put the gun down and leave it the heck alone and get help from someone who knows how to check it out. Is there anything about the above that you do not understand?

Now that your girl is a gun owner she has massive responsibility slapped upon her shoulders, so . . . listen up. Most states impose some form of legal duty on adults to take reasonable steps to deny access by children to dangerous substances or instruments. Therefore, when her little siblings, nieces and nephews, or drunk buddies come over, make certain her fully loaded .44 magnum is not laying next to the remote control in her living room.

It is the individual gun owner’s responsibility to understand and follow all laws regarding gun purchase, ownership, storage, transport, etc. Father/Daughter: If you do not know what you are legally required to do then contact your state police and/or local police for information regarding such laws. Remember, it’s your ass if something bad happens.

Therefore, store your gun(s) so that kids and creeps can’t get to them. Gun shops sell a crazy variety of safes, cases, and other security devices. While specific security measures may vary, you must, in every case, assess the exposure of the firearm and absolutely ensure that it is inaccessible to a child or an unauthorized user. You dig?

For more information on gun use, safety, and other responsible gun owner 411 log on to www.NRA.org.

Lastly, dad, think of the different headlines that would be written if our lovely coeds were armed when attacked. Instead of watching another horrific news feed about a beautiful girl found stuffed in a 55-gallon drum, we read about thug bad boy gone to meet his ticked off maker because the chick he picked on was armed and dangerous. That’s the report I want to start seeing, hearing and reading about: the good girl lives and the bad guy dies.