My New Year's Resolution: Get More Aggressive Making Fun of The Progressives 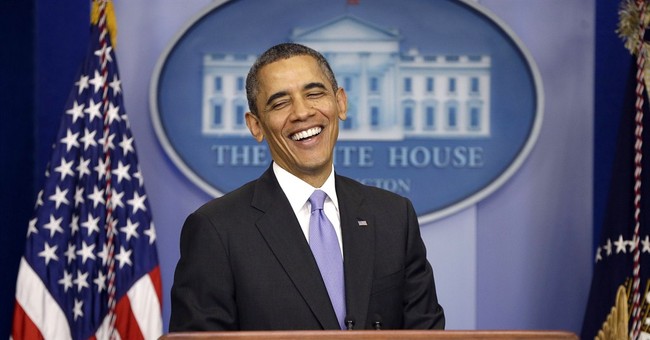 I hate New Year’s resolutions. The reason? Well, it’s not so much the well-meaning, lofty—yet ofttimes delusional—resolutions many of us spout off at midnight (wasted, of course)…it’s because of the lack of sober follow through once January 1st smacks us in the face. Yep, as Al Gore once famously said, amidst all our good intentions, “it’s hard for a zebra to change its spots.” More than likely most of us will revert back to the way we’ve always been.

I, however, have determined with pitbull-like resolve that this year will be an evolution for me. I might even change my name, like to an animal’s name or to a mythological critter like a famous centaur or something. That would be cool. I don’t know yet. To help me decide, my buddy Hambone Tweedle and I are going to roast a Safari Cigar and do a brainstorming session mañana for my new evolutionary nomenclature. Stay tuned.

Anyway, for 2014 I am dead set to morph from being a pretty good conservative gadfly to the lunatic Left to becoming an even more annoying source of angst for the progressives amongst us. Why? Well, the stakes are too high for conservatives to remain nice. Additionally, the folks who voted for BHO’s vapid crap are slowly waking up and need encouragement and feisty apologetics now. But mainly, destroying, ridiculing, and exposing the multitudinous liberal lies and honking hypocrisies from the Hope & Change wizards is more fun than burning ants for me.

To help me in this noble quest, James Delingpole, a Brit with true grit, penned a book to help me chart the course to be even more mordant with the libmonkeys who’re currently peeing on our great land. The book is ... 365 Ways to Drive a Liberal Crazy.

Delingpole, in this pole-axing tome, encourages the conservative, libertarian and recovering democrat to go for the jugular vein of the socialist ingrates who’re giddy to gut our nation of its exceptionalism. James exhorts the reader to annoy the annoyers, to quit being nicer than Christ and get into the verbal fray and demolish the diminishing few who still inhale Obama’s ganja through jokes, facts, arguments and outrageous rumors. Don’t worry, this task will be easy and God will help you succeed in this venture because, as James points out:

1. Liberals have no sense of humor. 2. Liberals have no facts on their side. 3. Liberals are hypocrites. 4. God, being conservative Himself, hates liberalism at least as much as you do, which is why he created reasons 1, 2 and 3.

Herewith are a few examples from JD’s manuscript to help you give the heave ho to the hos of socialism. Order and enjoy this laugh-out-loud book on Amazon.com and make 2014 fun and profitable for our nation. Check these out…

To bust on the left: Next time you hear a reference to “America’s first black president,” counter by referring to Obama as “America’s 44th white president.” Explain that you’re doing so on feminist grounds: “What? You’re trying to tell me that his Caucasian mom’s genetic input doesn’t count? But that’s so SEXIST!


Ask a BHO ogler to name the three shortest books in the world: How to Win Friends and Influence People, by Rahm Emanuel; Humility and Its Virtues, by Barack Obama; What the Constitution Means to Me, by Nancy Pelosi.

Quote with appropriate reverence and non-judgmental, multicultural appreciation the great Iranian religious leader Ayatollah Khomeini: to marry a girl before she begins menstruating is “a divine blessing.” If your liberal friend starts sputtering, cheerfully inquire, “Who are you to judge another culture—you’re not Islamophobic, are you?”

Tell them you don’t give a damn about the polar bears. And it’s not because you don’t like cute, fluffy, white carnivores; it’s because you find it hard to accept a species whose population has increased fivefold—from 5,000 to 25,000—in the last five decades can actually be in any kind of trouble.

Quote Auberon Waugh: “The urge to pass new laws must be seen as an illness, not much different from the urge to bite old women. Anyone suspected of suffering from it should either be treated with the appropriate pills or, if it is too late for that, elected to parliament [or congress, as the case may be] and paid a huge salary with endless holidays, to do nothing whatever.”

Tell a joke. Q: why is it so hard for liberals to make eye contact? A: Obama’s rear doesn’t have eyes.

Instead of “progressive,” always use the words “oppressive” or “regressive.” When called on this, feign puzzlement. “But how is it progressive to steal free citizens’ liberty, money, and hope, and hand it all over to government bureaucrats?”

Find a feminist and see if she has a sense of humor. Q: How many men does it take to open a beer? A: None. It should be open when she brings it to you.

Turn up at your local Muslim outreach program wearing an “I’d Rather Be Water Boarding” t-shirt.

Invite your liberal friends for a barbecue. Why? To celebrate the day when the lives of hundreds of thousands of young American and Allied servicemen were saved thanks to President Truman’s fine, principled decision to drop the atom bomb on Hiroshima. Serve Kamikaze cocktails (natch): equal parts Vodka, Triple Sec, and lime juice.

Have some Global Warming Fun: On a beautiful, hot summer’s day, invite a liberal to crack open a can or two of ice cold beer by the pool. Say: “Run that Cap and Trade thing by me one more time because there’s something I don’t get. You guys are saying that we need to raise taxes and make energy more expensive so we can get less weather like this?”

When a liberal asks what you’re buying your kids for their birthdays, say: “Oh, I guess the usual: more ammo.”

Give your small children toy guns and tell your liberal friend, “Yeah, I think this is the best way to break them in so they can handle the real thing when they’re six or seven.”

When your liberal neighbors knock excitedly on your door to show you ultrasound pictures of the baby they’re expecting, look mortified and then say, “But surely, it’s not yet a child, it’s still a choice.”