The Pelosi Doctrine: We Have to Enter Syria’s Civil War to Find Out What’s In It 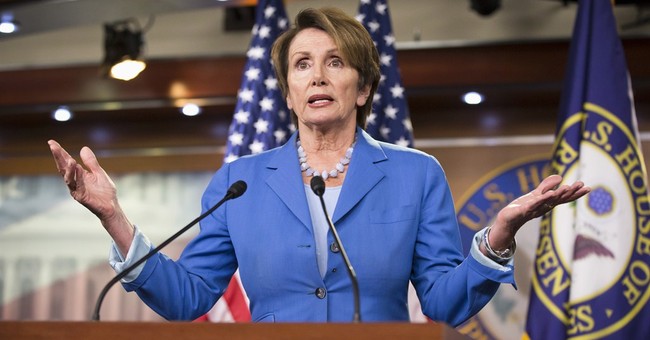 Y’know, I wouldn’t have a hard time believing that the U.S.A “needs” to blow into Syria and rain hellfire down upon Assad and his ilk except for the following:

2. The “rebels” we’d now be supporting look a bubble off level.

3. The folks who’re selling us this quagmire make Pinocchio look like Moses and their foreign policies have been as successful as Crystal Pepsi.

Let’s break the aforementioned down, shall we?

Point number one: Aside from International law (which doesn’t apply to the Syria scenario), and Article I, Section 8 of the Constitution, and an acknowledgment of the War Powers Resolution, from a pragmatic perspective, shouldn’t we let them sort their own business out? Geez, people, we can’t even fix Detroit – what the heck are we going to offer Damascus?

Earth to Washingtonian dipsticks: Our house first, please. Yes, let’s take care of our business for, oh … the next millennium and then look around the world for some fixer uppers, okay? Personally, I’m sick of us rushing off to some Suckistan, at the expense of our troops' lives and billions of dollars from our broke-ass nation to “fix” folks who wish to remain stuck in the Stone Age.

Point number two: The creepy “Rebels”. These “freedom fighters” look certifiable to moi. They look like terrorists. They sure don’t look or act like disgruntled gymnasts pining for democracy, especially that “rebel” from this summer’s video who killed one of Assad’s boys and then cut his heart out and ate it. That’s koo-koo where I come from. No air support for you.

Look, if BHO and Lurch want us to believe the “good-rebel-freedom-fighter” horse-hockey then they need to shut down YouTube for a while, because vids like the one the NYT ran this week of these lovelies executing Syrian soldiers while screaming “Ollie, Ollie, In Come Free”, or whatever it is they yell, make folks with a semi-decent BS Detector think we’d be helping replace something with nothing, or worse. If I was president, I wouldn’t provide them with air support or a pellet rifle, but rather dump bales of high THC ganja and Yanni CD’s in an attempt to get them to all chill out.

Point number three. Obama, Kerry and McCain want us to trust them that injecting the US into Syria’s civil war is the right thing to do? Hey, Kukla, Fran and Ollie: why don’t you ask a cop how smart it is to insert oneself into a domestic dispute? This has got bad idea written all over it. This sounds similar to what my redneck cousin Slappy said when he tried to ride a blade on the wind turbine in West Texas, “Hey, y’all. Watch this!”

Plus, when did Kerry become the hawkish war-monger? Didn’t he caterwaul about US involvement in another civil war a few decades ago? Yes, I believe that he did.

In all fairness to Señor Kerry, maybe he’s evolved. Maybe he was against involvement in another’s civil war before he was for it. Maybe his use of Teresa’s Botox has short-circuited his synapses? Maybe he didn’t know war could be so cool until Obama started it? Who knows? Only John and God know.

Furthermore, a lot of folks aren’t too stoked on following your lead in Syria, Mr. President, because your recent brain farts in the Middle East have left Libya and Egypt as a hot bed for Islamic lunatics that really hate our guts. And that’s not just this right-wing zealots thoughts, it’s also Colbert’s, Stewart’s and Kucinich’s. You know you’re done as a Leftist when Dennis and HuffPo go sideways on you.

Indeed, the nation is not down with your plan to kill more Syrians to send them a message not to kill Syrians. And don’t bother with the dead children diatribe because, as Colbert said, if you truly gave a crap about the plight of the kiddies you’d invade Chicago, Planned Parenthood and your own White House.

And finally, aren't we a little late to their war? It’s been cranking, in earnest, for the last twenty-four months. Aren’t the true “freedom fighters” pretty much dead already? Shouldn’t we have stepped to the plate, say, before 100,000 people were killed and the Islamic lunatics showed up?