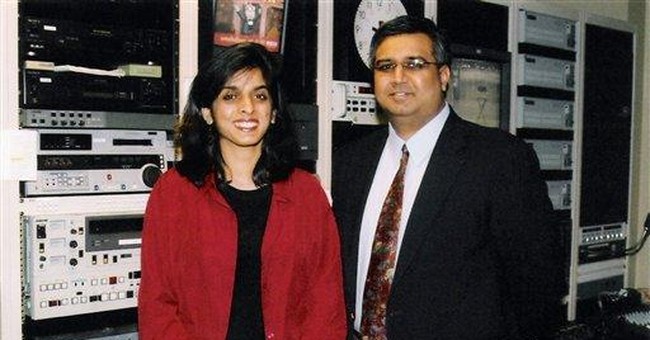 In his ongoing efforts to portray Muslims as chummy neighbors, Muzzammil Hassan, founder of Bridges TV, cut his wife’s head off last week when Muzzy found out she was going to ditch him. What’s that, you say?

This is the first you’ve heard of the 2/12/2009 beheading in Buffalo in which a Muslim TV exec chopped his wife’s noggin off in one of their office suites? Oh, I’m sorry. I assumed that you’d already heard about it—but then I just recalled that ABC, NBC, CBS, and NPR haven’t said a word about it since it happened. Oops. My bad.

Let me bring you up to speed with some background 411 on Islam’s latest right here in our backyard. According to my good buddy Robert Spencer over at www.JihadWatch.org:

Last Thursday (2/12/09), a woman named Aasiya Z. Hassan, 37, was found decapitated in Orchard Park, New York, a village near Buffalo. Her husband, Muzzammil Hassan, 44, was charged, rather oddly, with second-degree murder in the case . . . (2nd degree murder? What’s a guy gotta do to get 1st degree murder, saw the body in half?) . . . Aasiya Hassan’s body was found in the offices of the cable channel, Bridges TV. Aasiya Hassan was the inspiration for Bridges TV, and Muzzammil Hassan was its founder.

Check this out: According to Spencer, Muzzammil Hassan founded Bridges TV in 2004 to combat the negative perceptions of Muslims that he thought were dominating the mainstream media. According to a Reuters story at the time, Aasiya “came up with the idea in December 2001 while listening to the radio on a road trip.” Muzzammil Hassan explained: “Some derogatory comments were being made about Muslims that offended her. She was seven months pregnant, and she thought she didn’t want her kids growing up in this environment.” Bridges TV originally declared that its intention was to “fuse American culture with the values of Islam in a healthy, family-oriented way.”

Wow, Hassan, you sort of got off course there, now didn’t ‘cha?

Hey, Muzzy, you want to mitigate that negative PR that Islam is getting by decapitating thy bride? Holy crap, Hassan. Someone remind me not to hire this cat to do any PR work for my show or books once Holder pardons him.

Now, help me, Muzzammil. Be patient with me as I am a slow, dense, Jesus-following, funkadelic plebian. How does lopping off your wife’s cranium further sell us Judeo-Christian infidels on the healthy and family-friendly ways of Islam? It’s just a question. Don’t dust up, alright?

Pardon me for a sec. I’d like to go back and address the insane silence of the MSM regarding this BS Muslim-based beheading by a “moderate Muslim” concerned about his religion’s public branding.

Here’re a few questions: Why no reportage, Katie? Williams, don’t you wanna inform us cattle about this incident? Whoopi, where are you, girl? Lauer, are you listening? Are you guys checking your inboxes? Is this not newsworthy? Has political correctness got you by your short and curlies? What a bunch of wussies.

I guarantee that if a Christian TV executive Lizzy Bordened his bride we would hear about it ‘til Jesus came back screaming, “Hi-yo, Silver!” Yep, can you imagine if Paul Crouch severed his wife Jan’s pink-haired cabeza at TBN’s Praise the Lord Studios in Nashville? The MSM would be on that like stink on a monkey. Speaking of monkeys, maybe the chimp gone wild story this week trumped the beheading of a beautiful Muslim wife and mom. Yep, that’s got to be it. We must warn the world of the dangers of chimpanzees. Cough.

No doubt CAIR will fly straight into look-over-there negative press mitigation mode by denying Islam had anything to do with this. What am I to gather from these verses from the Qur’an, though? Robert Spencer from www.JihadWatch.org explains:

“The Qur’an says: ‘Men shall take full care of women with the bounties which God has bestowed more abundantly on the former than on the latter, and with what they may spend out of their possessions. And the righteous women are the truly devout ones, who guard the intimacy which God has [ordained to be] guarded. And as for those women whose ill-will you have reason to fear, admonish them [first]; then leave them alone in bed; then beat them…’ (4:34)

“The Islamic prophet Muhammad was once told that ‘women have become emboldened towards their husbands,’ whereupon he ‘gave permission to beat them’ (Sunan Abu Dawud, book 11, no. 2141). He was unhappy with the women who complained—not with their husbands who beat them.

“Muhammad even struck his favorite wife, Aisha. One night, thinking she was asleep, he went out. Aisha surreptitiously followed him. When he found out what she had done, he hit her: “He struck me on the chest which caused me pain, and then said: Did you think that Allah and His Apostle would deal unjustly with you?” (Sahih Muslim, book 4, no. 2127).”

Lastly, here’s a little 411 for all you ladies out there: If your prophet or god is cool with your husband beating the crap out of you or hacking your head off for thinking Brad Pitt is cute or because you want to wear a Miracle Bra, eat a BLT, or dance to a Shakira song, take that as a cue for you to find a new god, prophet and husband.