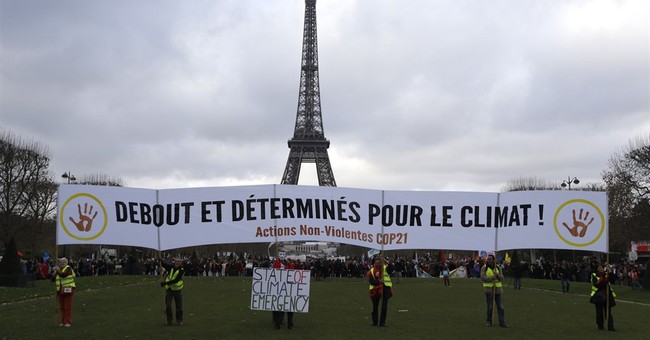 What passes as public policy today flies in the face of what the Founders designed which was a government with enumerated powers, checks and balances, and democratic accountability. Instead, we have executive overreach feeding the insatiable hunger of the federal bureaucracy already too eager to believe their own spin that somehow “they” are our betters and we should just shut up and comply. Executive fiat greatly expands the administrative state by making laws and regulations without Congressional action.

At its core, this is what happened at the Paris Climate meeting, where 25,000 unelected delegates crafted an agreement designed to transfer the wealth of more prosperous countries to others where environmental protections rarely exist. Here at home, unable to secure Congressional approval for a radical policy agenda because the American people inconveniently failed to elect Representatives and Senators who share a desire to micromanage the lives of its citizens, environmental activists have sided with the administrative state as their pathway to power.

Thus we have the Orwellian named “Clean Power Plan” that everyone agrees will have virtually no impact on temperature, sea level, or the climate. But it will have an impact on individual prosperity.

Secretary John Kerry said, “If all the industrial nations went down to zero emissions – remember what I just said, all the industrial emissions went down to zero emissions – it wouldn’t be enough, not when more than 65 percent of the world’s carbon pollution comes from the developing world.” “The fact is that, even if every American citizen biked to work, carpooled to school, used only solar panels to power their homes, if we each planted a dozen trees, if we somehow eliminated all of our domestic greenhouse gas emissions, guess what – that still wouldn’t be enough to offset the carbon pollution coming from the rest of the world.” Kerry added.

This mentality results in poor and oppressive public policy and only serves to divide the country - not by philosophy - but by who is in power and the permanent class of bureaucrats who work the system from the inside.

From January 6-8, the Texas Public Policy Foundation will host its annual Policy Orientation in Austin where one of the many areas we’ll explore is the rise of the “Fourth Branch” of government. That is, how government agencies – the essence of the administrative state – play ever more ubiquitous and decisive roles at both federal and state levels. Additional subjects at the wide-ranging newsmakers event will include criminal justice reform, government tax and spending priorities, environmental management, healthcare, higher education reform, and many other subjects that have wandered away from Constitutional balance.

Writing for the Heritage Foundation, Dr. Ronald J. Pestritto, dean of the Graduate School of Statesmanship at Hillsdale College, said, “For those who hold the Constitution of the United States in high regard and who are concerned about the fate of its principles in our contemporary practice of government, the modern state ought to receive significant attention. The reason for this is that the ideas that gave rise to what is today called "the administrative state" are fundamentally at odds with those that gave rise to our Constitution.”

Some would go further and say that the administrative state is an outright assault on constitutional principles pointing to examples of how bureaucracies like the Environmental Protection Agency (EPA) time and again, without the consent of Congress, promulgate regulations beyond their authority hoping to force changes in behavior before the courts have time to act against them. It is no wonder lawmakers are concerned the EPA is trying to derail an internal investigation into the agency’s handling of the Gold King Mine spill or the recent Government Accountability Office report highlighting EPA’s efforts to illegally use social media to generate covert propaganda in support of their Waters of the US rule.

Another example is the US Department of the Interior’s Bureau of Land Management (BLM) move - without due process - to take thousands of acres of Texas land from homeowners and ranchers along the Red River even though many Texans live on that land, and have in fact lived and paid taxes on the land for generations. They have titles and deeds going back to the 1800’s. That is why Texas Public Policy Foundation’s Center for the American Future is suing the BLM on behalf of these landowners. This is another subject that will be discussed at length during the Policy Orientation conference.

Governing by fiat, whether by the executive or bureaucratic state, distorts our system of government.