'Dreamers' Deserve a Life of Certainty Here in the United States

Donald Lambro
|
Posted: Nov 15, 2019 12:01 AM
Share   Tweet
The opinions expressed by columnists are their own and do not necessarily represent the views of Townhall.com. 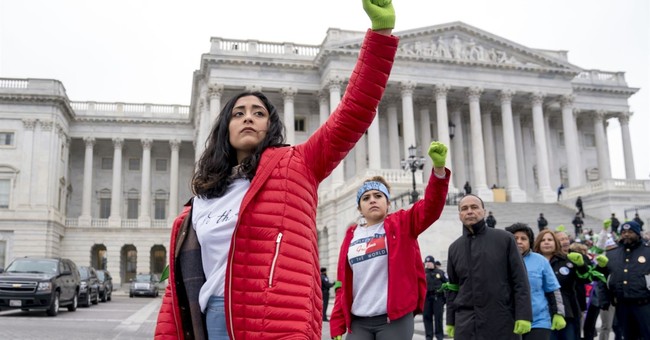 WASHINGTON -- The Supreme Court conducted yet another review this week of President Trump's attempts to end the undocumented immigrant program aimed at letting young people known as "Dreamers" stay in the U.S.

For the past two years, the administration has tried to kill the 2012 program begun by President Barack Obama to prevent the deportation of children, known as "Dreamers," brought to the U.S. by their parents years ago, who likely know little or nothing about their country of origin.

The program known as Deferred Action for Childhood Arrivals, or DACA, allows them to receive work permits that protect them from deportation.

Approximately 800,000 young, unauthorized migrants have been enrolled in DACA since it was created seven years ago.

According to the Pew Research Center and the Higher Education Coalition, about 350,000 were estimated to be currently enrolled in schools or colleges. About 65,000 Dreamers graduate from U.S. high schools each year, and many of them go on to college.

The administration told the high court on Tuesday that the program should end, despite its creation by Obama in an executive order.

U.S. Solicitor General Noel Francisco told the court Tuesday that the program should end regardless of its legality, The Washington Post reported Wednesday, "and the court's dominant conservative justices showed no inclination to disagree."

"DACA was a temporary stopgap measure that, on its face, could be rescinded at any time" by the Department of Homeland Security because it is unlawful, Francisco stated in oral arguments before the bench.

"And the department's reasonable concerns about its legality and its general opposition to broad nonenforcement policies provided more than a reasonable basis for ending it," he added.

"It is one of the court's most important cases of the term, and the court's four liberal justices indicated the administration has not met requirements for ending a program with such dire consequences for the immigrants and the economy," Post reporter Robert Barnes wrote.

Notably, Chief Justice John G. Roberts Jr., the pivotal "swing" member of the court, didn't seem to think that he found the administration's "actions troublesome or unusual," Barnes noted. But he cautioned his readers that "questioning at oral arguments is not always predictive, and the decision in the case might not come for months."

In fact, the court's liberal justices indicated that they must have a lot more compelling reasons to shut down the program, and Justice Sonia Sotomayor was one of them.

It may come as a surprise that, for Sotomayor, one of the reasons against ending it came from President Trump himself.

"There's a whole lot of reliance interests that weren't looked at, including ... the current president telling DACA-eligible people that they were safe under him and that he would find a way to keep them here," Sotomayor said.

Eventually, Trump has said, "a deal will be made with Dems for them to stay."

But Trump also said that "many of the people in DACA, no longer very young, are far from angels." In fact, by and large, they have an unblemished record because that is a requirement for acceptance into the DACA program.

In addition to hundreds of thousands currently in classrooms nationwide, thousands of others are working in businesses across the country and are widely known for their exemplary work record.

The conservative CATO Institute conducted a study a few years ago about the impact on our economy if 750,000 Dreamers were suddenly deported. Such an outcome would slash our economy by $280 billion over a decade and reduce tax collections by an additional $60 billion.

Over the years I have come into contact with a great many immigrants who came to America seeking work, freedom and safety for themselves and their families. Many established their own businesses and became employers, creating jobs, building homes, enriching our communities, our country and our economy.

America has always been a nation of dreamers. Let's keep these DACA Dreamers here where they belong.

(Donald Lambro has been covering Washington politics for more than 50 years as a reporter, editor and commentator.)