Building a Flood Prevention System Before Houston's Next Deadly Hurricane

Donald Lambro
|
Posted: Sep 01, 2017 12:01 AM
Share   Tweet
The opinions expressed by columnists are their own and do not necessarily represent the views of Townhall.com. 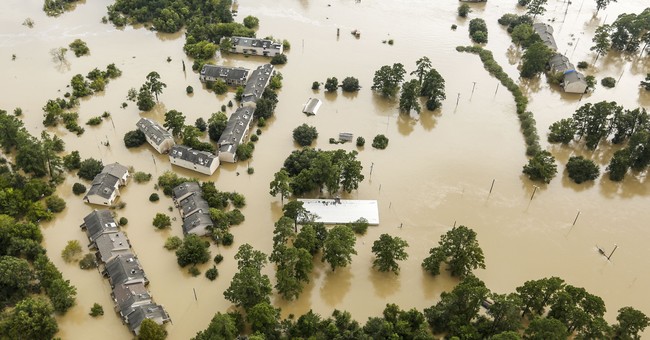 WASHINGTON - It will take many months, if not years, for Texas to fully recover from the record-breaking storm that slashed a devastating swath of death and destruction across the Lone Star state.

Hurricane Harvey is being called the “biggest rain-storm in the history of the continental United States,” destroying or damaging tens of thousands of homes and buildings, if not more, and shutting down major refineries throughout the state’s oil region.

Thousands of families have been rendered homeless with their houses submerged by the floods. And much of the Houston area’s infrastructure, including highways, roads, bridges, and telephone and electric facilities have been torn up. Countless automobiles and other vehicles that were swept away by the flood are a total loss. Nearly 35,000 people were in shelters in and around Houston, and the death toll stood at 37 and climbing.

But now comes the cleanup and rebuilding, and totaling what it will cost taxpayers. Not just those in the affected areas, but taxpayers across the country.

This will be a huge, budget-busting job that will require a major disaster recovery bill from Congress, totaling tens of billions of dollars and more than likely much more than that.

The insurance industry alone will be walloped by the huge costs of damage claims for those whose property was insured. But assistance will have to be provided to the many thousands of displaced homeowners who have lost everything, and have no flood insurance.

That will mean temporary housing and food assistance, medical care, and other programs to help people get back on their feet.

Sure, the federal government has created a National Flood Insurance Program, but don’t bet on that helping many people. It is nearly $25 billion in debt.

But other costs of Harvey’s rampage are already being born across the country by motorists at the gas pump as gas prices have risen as a result of the shut down of the oil refineries. At last count, 14 of them were inoperable.

One service station was reportedly selling gas for $20 a gallon.

And in one combustible chemical plant, where harmful substances may have leached into the environment, there could be a costly cleanup before it can be reopened.

All of this will surely be a massive recovery job for the Trump administration and Congress that will require the appointment of a special, government-wide task force and an experienced executive administrator to make all of the agencies work as one.

At the outset of this mammoth undertaking, one thing is for sure. Trump will not be making any more silly threats to shut down the government if he doesn’t get the money he wants from Congress to build a multi-billion dollar Mexican border wall.

By now every American knows, contrary to what Trump promised throughout his campaign, that Mexico isn’t going to pay for his wall — ever.

Last week at a rally in Phoenix, Trump said if he doesn’t get the $1.6 billion down payment from the taxpayers to build the wall, he will block the budget needed to keep the government running through the next fiscal year.

As he put it, “believe me, if we have to close down our government, we’re going to build that wall.”

Then the storm came, and suddenly there were much higher priorities than building a high wall costing nearly $80 billion: rebuilding a storm-ravaged region of our country and helping thousands of families put their lives back together.

Meantime, there will no doubt be recriminations over how one of the largest and richest states in the nation, with a long history of Gulf storms battering its coastline, wreaking death and damage, has failed to take necessary reforms and precautions to lessen their impact.

It is shocking that the greater Houston area, the fourth largest city in the country, doesn’t even have a working drainage system in its roadways, as do other major cities.

Texas is notorious for not instituting zoning regulations to prevent homes from being built on flood-prone plains.

Galveston, one of the coastline cities that was hit hard by Hurricane Harvey, has long been a punching bag for the state’s most deadliest storms, but people still buy and build beach homes there.

In 1900, an estimated 8,000 to 12,000 were killed by a monster storm. Fifteen years later another 275 residents died, followed by deadly storms decade after decade.

Far fewer fatalities occurred this time around, thanks to the heroic rescues by local, state and military forces, and an armada of small boats owned by civilian volunteers who saved a lot of lives.

But it’s now time to make a list of lessons learned and begin building a flood protection infrastructure before the next deadly storm comes ashore.