Donald Lambro
|
Posted: Dec 16, 2016 12:01 AM
Share   Tweet
The opinions expressed by columnists are their own and do not necessarily represent the views of Townhall.com. 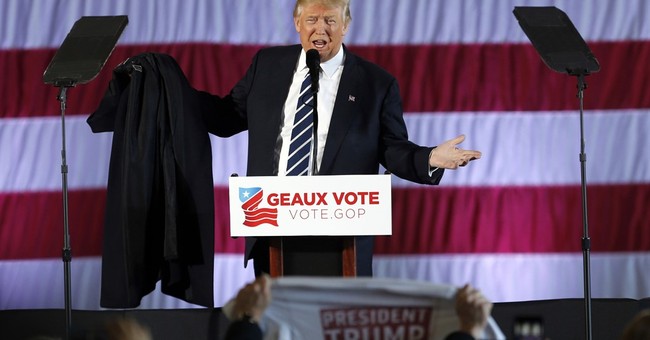 WASHINGTON - President-elect Donald Trump doesn’t seem to like doing some of the work that is a critical part of the most powerful government job in the free world.

The former television star, who has made billions in the real estate business, and has sat through many business meetings over his career, has made it abundantly clear he doesn’t think sitting through the daily intelligence briefings is a good use of his time, no matter what his top national security advisers tell him.

Presidents routinely receive five to six briefings a week, which Vice President-elect Mike Pence is dutifully doing, but not Mr. Trump who says he wants only one briefing a week, or possibly one or two more if necessary.

The man who built a business empire by wheeling and dealing on a global scale is said to abhor reading briefing papers, and often told his former campaign advisers to boil down anything he needs to read to a single page.

He’s not known for reading books, either, which is why his campaign speeches lacked depth, detail or analysis. Every target he went after was aways a “disaster,” but he rarely provided a reasoned explanation of how he would fix it.

And a number of former, high ranking defense officials are taking Trump to task for his resistance to the tedious but necessary work that comes with the job.

One of his chief critics is Leon Panetta, the former head of the CIA and secretary of Defense in the Obama administration.

“I have seen presidents who have asked questions about whether the intelligence is verifiable, what are the sources of that intelligence, but I have never seen a president who said, ‘I don’t want that stuff,” Panetta said this week at a national security conference in Dubai.

Trump, who thinks he knows everything, told Fox News Sunday that he often found the briefings repetitive and that he already knew about the threats the U.S. faces from its adversaries.

“I get it when I need it,” he said. “I’m like a smart person. I don’t have to be told the same thing in the same words every single day for the next eight years.”

He not only doesn’t think he needs daily intelligence briefings, he doesn’t think the CIA or the larger intelligence community can be trusted. “These are same people that said Saddam Hussein had weapons of mass destruction,” he said in a statement put out by his transition team.

Putting down the nation’s intelligence services, before you are sworn into office, many of whom have given their lives for their country, is no way to start a presidency.

Trump doesn’t want his intelligence advisers telling him things that he dismisses out of hand, especially about the kind of cyber-warfare skullduggery that Russia’s Vladimir Putin, a former KGB agent in the Kremlin, is conniving to use against our country and its elections.

“When it comes to Russian interference in our last campaign, 17 intelligence agencies agree that Russia is involved in that effort,” Panetta said, according to the Reuters news agency.

“I think the president would do well to say we ought to find out what Russia’s role was, we ought to investigate it and ensure that it never happens again,” he added.

But Trump flatly rejects the findings in the intelligence reports.

Why doesn’t he believe what intelligence investigations have uncovered about Russia’s role in the cyber-break in at the Democratic National Committee, and other chaos-producing activities aimed at last month’s election?

Because Putin is his friend and he willingly swallows all his denials, hook, line and sinker.

Throughout this election, Trump has repeatedly stated his unreserved admiration for Putin. “The man has very strong control over a country,” he has said. He has been a leader “far more than our president has been a leader.”

It is also common knowledge that Trump has done a lot of business in Russia that has enriched Trump, Inc.

His son Donald Trump, Jr. once said in 2008 that the “Russians make up a pretty disproportionate cross-section of a lot of our assets. We see a lot of money pouring in from Russia.”

One can also see why Trump has picked Rex Tillerson, the Exxon-Mobil CEO, to be his secretary of State, the man who the Wall Street Journal has said is close to Putin who has awarded him Russia’s Order of Friendship.

But is Putin the kind of world leader America wants to embrace, as Trump seems so willing to do?

This is the guy who invaded the Crimean Peninsula in the Ukraine and annexed it, then sent Russian troops into Eastern Ukraine where they threaten to seize control of that sovereign country.

But Trump has not uttered a word of complaint about any of this. Indeed, earlier this year on ABC’s This Week he insisted, falsely, that Russian troops were not in the Ukraine, and were not going to be there in the future.

And, clearly, no amount of intelligence briefings is going to disabuse Trump of that ludicrous notion.

The Supreme Court Commission Has Finished Its Report. Here's What It Concluded About Court Packing.
Townhall
Iowahawk goes on righteous tear on behalf of potential innocent victims of civil asset forfeiture
Twitchy
The Democrats Have a Hate Problem
Redstate
The Morning Briefing: The Sweaty, Gross Democrat/Media Lovefest Gets Even Nastier
PJ Media