Donald Lambro
|
Posted: Nov 04, 2016 12:01 AM
Share   Tweet
The opinions expressed by columnists are their own and do not necessarily represent the views of Townhall.com. 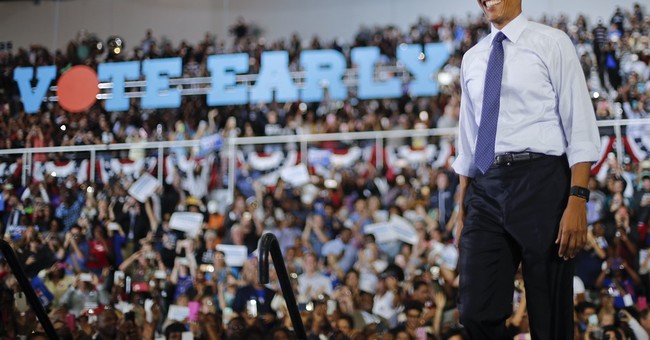 WASHINGTON - As the fiercely combative presidential election races to the finish line, a majority of voters agree on at least one thing: the two major contenders are the most disliked candidates in modern political history.

That wasn't the case in many of our past presidential contests when popular, well-respected candidates, win or lose, sought the highest office in the land.

Legendary names like Dwight Eisenhower and Ronald Reagan, and Mitt Romney, among others, come to mind. But not this year when the chief choices are between two extremely unpopular figures.

When a nationwide tracking poll in the final days of the election asked registered voters to describe their favorable or unfavorable impression of Hillary Clinton and Donald Trump, their responses were unequivocally dismal for both of them.

Heading into this week's campaign, 59 percent of voters polled -- nearly six in ten -- said they had an unfavorable impression of Clinton, and a virtually identical percentage had a negative view of Trump, according to a Washington Post/ABC News poll.

But Americans aren't known for pulling their punches, and, when asked to elaborate, reveal just how disgusted they really are with their choices.

Close to half of registered voters, 47 percent, said they have a "strongly unfavorable" view of the former secretary of State as well as the billionaire real estate mogul.

Like it or not, that's the disagreeable choice now facing voters when they go to the polls next Tuesday.

For the past eight years, the American people have had to suffer through what economists say is the longest recovery since the Great Depression.

President Obama, and his Democratic apologists, have boasted that the economy has in fact recovered nicely, job creation is up, unemployment is low, and, well, you've never had it so good.

But eight years later the Obama economy is growing by little more than 1 percent on an annual basis. The jobless rate is low because millions of longterm jobless Americans who haven't looked for a job in four weeks aren't counted as unemployed.

Millions more have dropped out of the labor force, even though they wanted to work. Many more are working only part time when they want and need full-time employment, according to the Bureau of Labor Statistics.

The average recovery time after a recession is just two years. President Reagan came into office in the midst of a fierce recession in 1981, cut taxes, and the economy took off like an Atlas missile, fueled by quarterly growth rates of between 3 and 8.5 percent in 1983 and 1984.

The perpetually anemic Obama economy hasn't been able to achieve and maintain even 3 percent GDP growth.

And a wave of job-killing business regulations that have made it impossible for small businesses to get started and survive.

If you think the government isn't big enough, so does Clinton. She is calling for the enactment of dozens of new federal programs from "free" college tuition to a far higher minimum wage that the nonpartisan Congressional Budget Office says would kill up to a million jobs.

But Donald Trump is in a class by himself: given to wild exaggeration and downright false boasts and accusations, crude, bullying, insulting attacks, and an ugly past that reveals a man utterly without character.

Like what? Well, like his taped remarks in preparation for an ABC program, when he freely talked about sexually assaulting women and getting away with it, because, he said, "When you're a star, they let you do it."

In his book, "The Art of the Comeback," he boasts of his experiences "with…seemingly very happily married and important women…"

Then there is his love affair with Russia's Vladimir Putin who provided the weapons and other backing to invade and annex the Ukraine's Crimean peninsula and has since rolled his tanks into the eastern part of the country.

This is a man who has imprisoned or killed his political opponents, and has been bombing and killing civilians in Syria in support of Bashar al Assad's murderous regime.

Yet when senior intelligence of officials revealed that a wave of cyber attacks on the U.S. originated in Russia, he dismissed such allegations, then expressed the hope that the Russians would break into Clinton's e-mails.

Appearing on MSNBC, host Joe Scarborough reminded Trump that Putin kills journalists who displease him, he replied, "Well, I think our country does plenty of killing also."

Long known as one of the most litigious, thin-skinned figures in the real estate industry, he says he would "open up" libel laws as president so he can sue journalists and their publications who criticize him.

Apparently he hasn't heard about the First Amendment to the Constitution.

To be sure, Trump understands how to get America's economy growing again, and he would no doubt sign the GOPs tax cutting reform bill, though not the one he has proposed. His plan would blow a hole in the budget, the bill on Capitol Hill will erase tax loopholes and corporate welfare to make it revenue neutral.

But he has shown no signs of being able to work with Congress on much else, especially if the Democrats take control of the Senate.

Either way, the voters are in for a rude awakening with these two candidates. We're in for a bumpy ride.