Donald Lambro
|
Posted: Jul 29, 2016 12:01 AM
Share   Tweet
The opinions expressed by columnists are their own and do not necessarily represent the views of Townhall.com. 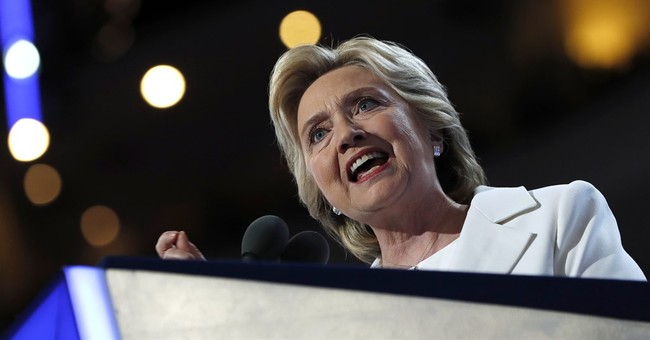 WASHINGTON -- Hillary Clinton handed Donald Trump the best campaign issue he could hope for this week, on a silver platter, and he ignored it.

While Clinton was proposing a huge increase in capital gains taxes on investors, which would kill jobs and what little is left of the chronically weak Obama economy, Trump was urging his buddy, Russian thug Vladimir Putin, to step up his cyber-war on the U.S. to find Hillary's 30,000 deleted emails.

Worse, Trump didn't respond negatively when a reporter asked him if he would recognize Putin's military seizure of Ukraine's Crimean peninsula as Russian territory. Or whether he would lift U.S. sanctions against Moscow for its act of war on a sovereign country.

Putin's military takeover of Crimea in 2014 was the first time since World War II that a European nation has seized territory from another country in the region. And he is now said to be looking at the Baltic states as his next victims.

While Trump was clumsily sidestepping questions that might offend his pal in the Kremlin, Clinton was calling for punishing tax hikes that economists said would kill job-creating capital investment in a stalled economy.

In 2012, Obama effectively raised capital gains taxes in a legislative deal that pushed the rate to 20 percent -- on profits from the sale of stocks, real estate or other assets.

Hillary's tax hike plan would push the top capital gains rate up to 36 percent for people and businesses who hold investments for a minimum of two years, but less than six years.

She says this would raise taxes just on the rich, while discouraging short-term investments by major investors.

But in a slowing economy that was barely growing at less than 1 percent, and now suffers from declining capital investment for new business start-ups, her plan is the kiss of death.

The history of capital gains taxes can be summed up in one sentence: Lower tax rates result in stronger economic growth, more jobs, and more tax revenue that will reduce the budget deficit.

Hillary should know this better than anyone, because her husband, President Clinton, signed a Republican cap-gains tax cut bill in his second term that led to a wave of new investment in high technology, good paying jobs and stronger GDP growth.

He began his presidency by raising the top two income tax rates to 36 percent and 39.6 percent, and raised the corporate tax rate to 35 percent.

But economic growth limped along at no better than 3 percent (something Obama has never achieved), and the American people saw little or no improvements in the U.S. economy. In the 1994 elections, the GOP gained 54 seats in the House and eight seats in the Senate.

In 1995, Bill Clinton told a party fundraiser that he had made a bad mistake. "Probably there are people in this room still mad at me at that budget because you think I raised your taxes too much. It might surprise you to know that I think I raised them too much, too," he said.

So in his second term, he quickly signed the GOP's welfare reform plan, slashed trade tariffs under the North American Free Trade Agreement (NAFTA) to boost trade, and sharply cut the capital gains tax to 20 percent from 28 percent.

The result was a boom in capital investment, stronger employment growth, 4.2 percent economic growth, much higher wages, and a sharp rise in worker 401(k) retirement funds as the stock market soared.

All of this happened, "not by raising tax rates on high income but not yet rich middle-class families, and certainly not by raising the capital gains tax ... nor by massively increasing federal spending," economic analyst Charles Kadlec wrote in Forbes magazine.

Instead, "it was a prosperity produced by freeing America's poor from a punitive welfare system, lowering tariffs, reducing tax rates on the creators of wealth, (and) limiting the growth of federal expenditures," Kadlec said.

Trump, who no doubt would sign the tax cut reform bill Republicans would send to his desk next year, still intends to raise U.S. trade tariffs on all imports, sending consumer prices through the roof, hurting our economy and sparking a no-win trade war.

But if, as expected, the GOP keeps control of Congress in November, there is no way that any of Hillary's tax hikes would be enacted. And tax cuts, of course, would be dead on arrival in the Oval Office. It will be four years of political paralysis.

Ditto for Trump on tariffs. There is no way that the GOP Congress will ever raise taxes on consumers in this or any future economic environment.

Meantime, durable goods factory orders plunged 4 percent in June. Jobless claims are rising. The economy is drifting. And Putin is plotting his next conquest.