Donald Lambro
|
Posted: Apr 01, 2016 12:01 AM
Share   Tweet
The opinions expressed by columnists are their own and do not necessarily represent the views of Townhall.com. 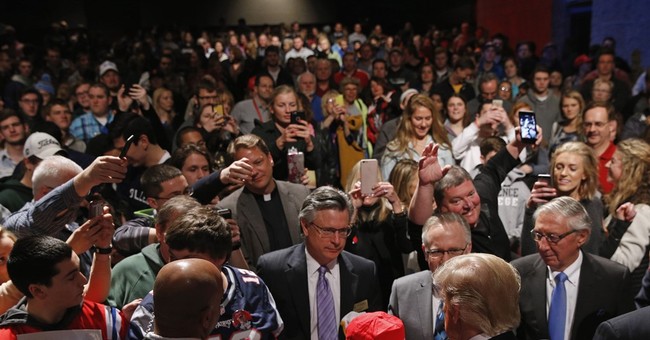 It isn't every day I get a note from one of Donald Trump's former supporters, saying Trump doesn't know what he's talking about.

But earlier this week, Stephanie Cegielski, who was a consultant to a former "Make America Great Again" super PAC (that has since shut down), read my column about how the former TV reality show host is making stuff up about America's trade record. The day before, she had posted an open letter online, denouncing the candidate she once supported, and emailed me some of those same sentiments.

"The man does not know policy, nor does he have the humility to admit what he does not know," Cegielski wrote, saying she no longer supports Trump.

Not only does he not know much about trade policies, but he's given to inventing his own "facts" about them.

My column was about remarks Trump made last month, in which he said, "They (Japan) have cars coming in (to the U.S.) by the millions, and we sell practically nothing.

"We will keep the car industry in Michigan, and we're going to bring car companies back to Michigan," he told voters on a campaign swing through the Rust Belt.

But this is a deep distortion, if not downright false, about what is happening in the U.S. auto industry. He is making up a situation that does not exist.

Worse, Trump uses decades-old trade rhetoric that may have been legitimate in the '60s, '70s or '80s, but not in today's global economy. In one of the first Republican presidential debates this year, Trump said that Japanese ships were lined up on the West Coast, loaded with cars to sell to Americans. That is no longer true.

While he's telling voters that he will bring "jobs back to America," the fact is that Japan is the one creating millions of jobs in our country. Toyota, Honda and other automakers have manufacturing plants across our country, where Americans are turning out cars, automotive parts and engines by the millions.

Most of these plants are set up in right-to-work states in the South where they don't have to deal with unions, "and that in turn has led to supplier parks being established nearby," says ace Washington Post fact checker Glenn Kessler.

"Trump's promise that he was going to bring car companies back to Michigan ignores the fact that Michigan has been losing the auto industry to other states, not countries, because of its union traditions," Kessler writes.

"Michigan would have to pull up its socks in a big way," says Gary Hufbauer, senior fellow at the Peterson Institute for International Economics. "You might be able to bring some auto production back to the United States, but not Michigan."

That's another thing Trump doesn't mention, because he either doesn't know it, or leaves it out of his speeches to con the voters into believing his phony political pitch.

Yes, manufacturing jobs have declined in the U.S., but we're producing more because of increased productivity.

"In real terms, U.S. factories produced more output (looking at straight output or value added) last year than ever before in history," says Dan Ikenson, director of trade policy studies at the free-market Cato Institute. "Year after year (with the exception of recessions), the sector breaks new records with respect to output, revenues, exports, imports, return on investment."

At the same time, "Trump's complaints about currency manipulation are woefully out of date," Kessler says, quoting economist Fred Bergsten, senior fellow at the Peterson Institute, who says Trump is "way out of whack."

China hasn't been manipulating its currency for about two years. Indeed, it's been selling its dollars and reducing its reserves in the face of its economic slowdown.

Kessler, who gives out Pinocchios to public figures who make false and dubious claims, gave Trump four, his worst score for dishonesty.

Yet all of Trump's false or outdated statements about trade and imports have remained a staple in his campaign rhetoric, duping voters into believing that he knows what he's talking about.

But people are beginning to catch on to Trump's flimflam candidacy, and an increasing number of voters are turning away from him in droves. In fact, recent polling shows that both Trump and his remaining chief rival, Texas Sen. Ted Cruz, fell to new lows in their favorable ratings in March.

"The primary and caucus season is taking its toll on the images of three of the major presidential candidates," writes Frank Newport, editor-in-chief of the well-respected Gallup Poll.

"Republicans Donald Trump and Ted Cruz, in particular, have suffered significant drops in their images over the past two months," Newport said Wednesday. "Trump has always had the worst image" of any of the five active presidential candidates, "and his image has slipped further among Americans since January."

The bottom line: Americans now view Trump and Cruz in "a worse light than in any month since Gallup began last July."

And judging from Trump's incendiary remarks this week that "there has to be some form of punishment" for women who got an abortion if it was made illegal, the GOP's polls are only going to get worse.