Democrats' Opposition to Keystone Pipeline is Hard to Fathom 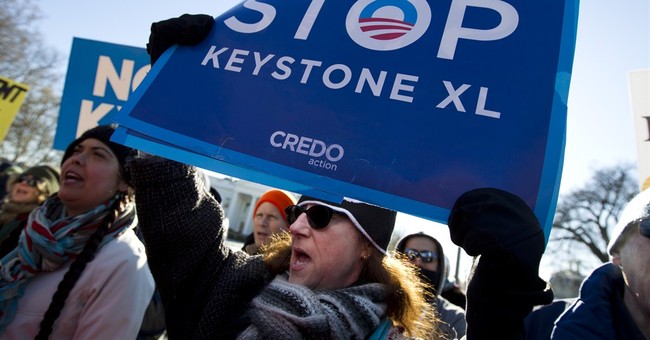 If you're one of the millions of people who can't find a good-paying job in the Obama economy, the Democrats sent you a message this week: Get lost.

Senate Republicans, who won control of Congress last year on a promise to start creating more jobs, were true to their word, making the job-producing Keystone XL pipeline one of their first orders of business this year.

Senate Majority Leader Mitch McConnell brought the bill up for a vote to force completion of the pipeline over the objections of President Obama, who says he'll veto it if the legislation reaches his desk.

On a largely party-line vote Monday, 53 senators, most of them Republicans, voted to go forward with the bill. But 39 senators, all Democrats, voted against it, blocking the measure which, under Senate rules, needs 60 votes to get it to a final vote.

Eight senators were absent that day, and McConnell is going to bring up the bill again later this week for another try. But the vote, which the network news shows ignored, was a cold-blooded example of how Obama and his party put politics before jobs. In this case, blocking a bill that's opposed by the environmental mob which richly bankrolls their campaigns.

For the past six years of his presidency, Obama has been fighting the pipeline, which would carry crude oil from Canada's Alberta province to the Gulf, creating thousands of jobs in the process.

He did it by insisting that the government had to first conduct an exhaustive study that was deliberately delayed to keep from moving ahead with a project the American people overwhelmingly approved but Obama hated.

Now, incredibly, the debate is over the number of jobs the pipeline will actually create -- with Democrats arguing that it would create "only" a few thousand jobs and almost all of them would be only "temporary."

This is the argument that assistant Senate Democratic leader Richard J. Durbin of Illinois made during debate on the bill, dismissively ridiculing the kind of jobs at stake by saying "most McDonald's" offer more jobs than that.

In fact, while the State Department report maintained the pipeline will create just a small number of permanent jobs, it would create thousands of new part-time jobs -- up to as many as 42,000 new jobs, when all of the contract work, pipeline production and other spending are factored into the equation.

All construction projects will by definition end after the work is completed, except for those that must oversee and maintain the pipeline. But it is the height of hypocrisy for Durbin -- who has a job that pays him nearly $194,000 -- to be demeaning any short-term contract work.

Durbin and the Democrats who voted to kill this jobs bill should know a lot about part-time work because those are the kind of infrastructure jobs they created in Obama's failed $800 billion economic stimulus program. When the road and bridge work was done, the jobs ended and the jobless rate remained at recession levels.

In fact, part-time or temporary work has been a largely hidden part of the administration's monthly job numbers. The lower unemployment rate gets the headlines, not the fact that many of these "jobs" are actually part-time.

You could search high and low for any complaints about this from Durbin and other Democratic leaders, and not find a discouraging word uttered by any of them.

Yet there was Democratic Sen. Charles Schumer of New York on CBS' "Face the Nation" Sunday minimizing the number of jobs Keystone would produce, saying that they "would create ... only 35 permanent jobs."

While The Washington Post's fact checker, Glenn Kessler, says the 42,000 job number is questionable, he thinks "it's safe to say nearly 4,000 construction jobs will be created, at least temporarily. One could even say that 16,000 jobs would be or have been supported from direct spending on the project, such as those pipe makers in Arkansas."

My own view is that when the Keystone project is fully completed, including the income-rippling effect it will have on the rest of the economy, it will have a far larger impact than its critics suggest.

Yet when the nation is showing new signs of economic decline and polls report that a majority of Americans have a gloomy view of the economy, it's outrageous that Obama and the Democrats are trying to kill any jobs bill.

Well, not exactly every Democrat. The oil industry has been running nonstop television ads pointing out that the pipeline is backed by Bill Clinton, investment guru Warren Buffett (one of Obama's earliest supporters) and a lengthy line of Democratic labor union leaders.

Veteran economics columnist Robert J. Samuelson has called Obama's opposition "an act of national insanity" at a time when America is in need of every job it can create.

Despite the glowing economic figures Obama recited in his State the Union address last week, he left out a lot of bad numbers that are getting worse.

Durable goods orders for long-lasting manufactured products fell sharply in December by 3.4 percent, following a 2.1 percent decline the month before. Investment plans by businesses dropped last month, after a similar decline in November.

"The nation's median income remains lower than it was when the Great Recession ended," writes economics analyst Jim Tankersley.

"Scan the typical family's balance sheet," Tankersley continues, "and the picture looks even worse. From 2010 to 2013, middle-class families sold off assets and spent down what little savings they had, in order to pay off debt and compensate for stagnating wages, according to calculations by New York University economist Edward N. Wolff."

Obama's answer to all of this: more federal spending on infrastructure programs, but a firm no to the Keystone pipeline and across-the-board tax cuts to boost incomes and spur new business investment and jobs.

If the president and the Democrats are successful in killing the GOP's Keystone bill, they're going to face a lot of angry voters in the 2016 elections, which will make last year's midterm landslide look like a walk in the park.