Obama So Unpopular, Even MA Dems Don't Want Him Campaigning in Their State 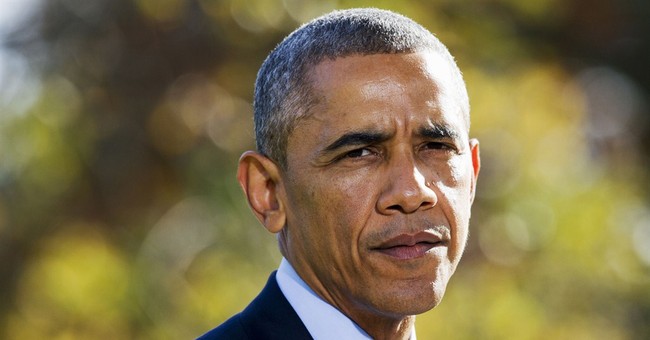 WASHINGTON - Americans go to the polls in seven days to cast their votes in a midterm election that's shaping up to be an angry outcry over the disastrous direction of the country.

For the past six years, the Democrats have effectively been in charge by virtue of the fact that Barack Obama sits in the White House, setting policy, and his party is in control of the Senate (at least for now) that can block any legislation passed by the House Republicans.

But even though Democrats control the major gates of power, Obama and his party have sought to convince the voters that all of their mistakes and failures are the result of the GOP or the previous Republican administration.

That duplicitous shell game worked for several years, but in the end, discerning Americans learned who was really to blame for all of their woes -- and said so when they put the GOP back in control of the Democratic-run House in 2010.

And are likely to inflict the same punishment next week on Majority Leader Harry Reid and his gang of Democrats in the Senate.

Over the last half dozen years, the national news media took great pleasure in endlessly reciting polls showing how unpopular the Republicans had become since the 2008 recession.

But they are unsurprisingly quiet about recent polls that show the Democratic Party's approval scores plunging to their lowest rating in decades.

A Washington Post/ABC News poll released Sunday found the disapproval rating for Democrats in Congress has now risen to its highest point in two decades.

CARTOONS | Lisa Benson
View Cartoon
This is the political environment that the Democrats are facing when voters go to the polls on Nov. 4

in what will be a nationwide referendum to decide which party should be in control of Congress for the last two years of Obama's trouble-plagued presidency.

Have you noticed that the president has been unusually subdued in the last few weeks? He has been beaten down by events and his own circumstances, seldom making any major news, or at least the kind that makes the front page or leads the nightly news shows.

The country is in the midst of a competitive, down-to-the wire, midterm election battle and Obama isn't getting a lot invitations and pleas from his party's besieged candidates to campaign for them.

Quite the contrary, the message has gone out to the White House from Democrats in tight races that his is so unpopular, the best thing he can do for them is to stay as far away as possible. So Obama has been relegated to campaigning only in dyed-in-the-wool Democratic states where his party's candidates are not in trouble.

Indeed, even in some heavily Democratic states, where he won big in 2012, he is being asked to stay out. It didn't get the attention it deserves, but Obama was asked not to go into Massachusetts to campaign for Democrat Martha Coakley who is running behind her Republican opponent, Charlie Baker, in the race for governor.

Obama easily carried the liberal Democratic state by 23 points, but now he is the kiss of death for any Democrat in a tight race. Democratic political pros were hard pressed to think of a time when their party's president couldn't campaign in a midterm election in Massachusetts.

With his approval polls sinking to near 40 percent (the same percentage of people who tell the Gallup poll they're "struggling" in this economy), he's no longer the political force he once was. Instead, he has become his party's political albatross.

It is hard to remember a president who has been the cause of so many unpopular reforms -- from Obamacare -- whose costs are still mounting, to an anemic economy that millions of Americans say is in a recession.

It won't make the nightly network news tonight, but the latest evidence of this economy's chronic weakness came out Tuesday

when the Commerce Department announced the nation's durable goods orders fell in September for the second month in a row.

The report revealed a 1.3 percent decline in business demand for machinery, computers and other goods which suggests a sluggish economy.

That followed an 18.3 percent decline in August that signaled businesses were "reluctant to invest in updating equipment," the Bloomberg Business News reported.

The housing sector isn't so hot, either. U.S. sales of new homes were close to flat in September. Not a good sign in a struggling economy.

As for the jobs issue, Americans are justified in taking the Obama administration's 5.9 percent unemployment rate with a huge grain of salt. For one thing, it leaves out millions of workers who tell government pollsters they've stopped looking for full-time work because they can't find work. So they are not counted among the jobless.

The Gallup Poll, which conducts its own, and probably more accurate employment survey, puts the jobless rate at 6.2 percent and the all-too-often ignored underemployed rate at 15 percent.

Then comes a Federal Reserve study that found the median household is now worth less than it was back in 1989.

Despite Obama's claim that we're doing better than we were before he was president, economics analyst Matt O'Brien, who writes for the Washington Post's Wonkblog, suggests that's not true.

"The new harsh reality is that the bottom 90 percent of households are poorer today than they were in 1987," he writes.

The good part about these elections is that the voters will have a chance to register their disapproval of Obama and the Democrats. The bad part is that after the votes are counted, Obama will still be in office for another two years.

But if the Republican campaign goes according to plan, he will be a president without a majority party behind him or a viable agenda -- while a revitalized GOP reaches out to rebuild and expand its party in preparation for the 2016 presidential election to come.