Clueless in the White House 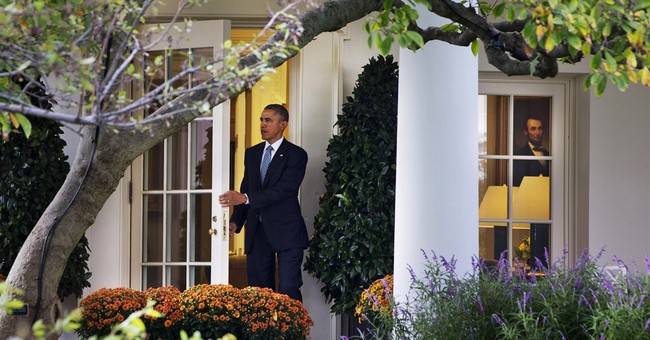 Romney's story, which nails the president's weakness, involves golf champion Phil Mickelson and the grand slam tennis great Andre Agassi. As he tells it, Obama goes to a bank to cash a check, but without any ID on him.

The teller says he can't cash it without identification, pointing out that Mickelson proved who he was by tapping a golf ball into a cup, and Agassi did it by belting a tennis ball into a tiny target. "Is there anything you can do to prove to us who you are?" the bank clerk asked the president.

Obama replies, "I don't have a clue."

That certainly sums up Obama and his job-challenged, trouble-filled presidency: A long-suffering economy, a slew of scandal-ridden programs, agencies and departments, and a series of bungled foreign policies that have resulted in a more powerful and far more lethal terrorist threat that is now on the brink of toppling regimes in the Middle East.

In his first term, Obama was able to con a lot of people, including the gullible liberal news media who adored him. But that no longer appears to be the case as his troubles have mounted and his job approval polls have plummeted.

Gone are the worshipful stories about hope and change. Now he is being sharply criticized for his many failures, by the media and by former administration officials in tell-all books that give him failing grades as commander in chief.

The latest example came Sunday in a blistering review of his presidency in the Washington Post, one of Obama's earliest supporters and defenders. The story was no doubt read by the administration's top echelon and very likely by the president himself and his West Wing staff.

It was written by Aaron David Miller, a distinguished presidential analyst at the Woodrow Wilson International Center for Scholars. And it ran under the pull-no-punches headline "Disappointer in chief," followed by this sub-head: "Why Obama hasn't become the change we were waiting for."

"Whatever your judgement of Obama's policies, there is a vast gap between the expectations he set for himself and his supporters and the realities of his presidency. Obama reached for greatness but has disappointed many of those who voted for him once or even twice," Miller writes.

Obama ran on a promise to change the way Washington works, but by and large has been hopelessly outmatched in the rough and tumble of governing, a victim not only of his complete lack of hands-on, executive experience, but also of failed policies drawn from the New Deal that didn't work then and wouldn't work now.

"From pledging an Earth-moving transformation, Obama has been reduced to hitting singles…. After drawing early comparisons to Abraham Lincoln, Franklin Roosevelt and John F. Kennedy all rolled into one, Obama has fallen so low that journalists wonder whether Jimmy Carter is not a more appropriate parallel," Miller says.

"Obama cannot claim the persona of Kennedy, who captured the nation's imagination; nor the mantle of Ronald Reagan, who as Obama himself has admitted, changed the trajectory of the country," he adds.

Obama came from a failed urban political environment that is addicted to higher taxes, big government and other far left, job killing policies that have ruled his presidency. He admired JFK and Reagan for their success in office but didn't understand or acknowledge the economic policies that brought this about.

He has demagogued for higher tax rates, conveniently ignoring Kennedy's across the board tax cuts that got the economy moving again and resulted in a budget surplus.

He signed a higher capital gains tax on investments that hurt the economy and undermined job creation, ignoring the GOP-passed, cap-gains tax cut Bill Clinton signed in his second term that sent the economy soaring and drove unemployment down to 4 percent.

Incredibly, Obama ignored the bi-partisan tax reforms of his own "Fiscal Responsibility and Reform" commission that he created on Feb. 18, 2010.

Democratic adviser Erskine Bowles and Republican Alan Simpson, who co-chaired the commission, proposed a sweeping agenda to cleanse the tax code of exemptions and other special interest tax loopholes.

In order to keep the reforms revenue neutral, they called for lowering the corporate tax rate and other taxes to boost economic growth and create more jobs which would bring more revenue into the Treasury and reduce the deficits.

Obama gave their idea the cold shoulder and an early burial, despite the fact that Bill Clinton recently called for immediately cutting the 35 percent federal corporate tax rate, the highest in the industrial world.

If Obama really admires Ronald Reagan for changing the political trajectory of the country, he would have done well to emulate the Great Communicator who ran on tax reform in his campaign for a second term.

Not only did Reagan carry 49 states, after his earlier tax cuts ended the recession in two years, he won bipartisan support in Congress for tax reforms that cut the top tax rate to 28 percent.

Among its Democratic supporters back then: Rep. Dick Gephardt of Missouri and Sen. Bill Bradley of New Jersey.

But Reagan did what Obama seems incapable of doing: Reaching out across the aisle, bringing his adversaries in for the sales pitch and taking his case to the people to put political pressure on Congress.

He often invited House Speaker Tip O'Neill to the Oval Office where they swapped old Irish jokes and Reagan, in the end, got what he wanted.

Obama, aloof, disengaged and utterly incapable of such hands on governing, is ideologically against the kinds of pro-growth reforms that have drawn bipartisan support in Congress before.

His failures have little or nothing to do with partisanship in a divided Congress. They are the result of his refusal to accept reforms that have not only worked in the past, but were proposed or embraced by presidents in his very own party.