It's Going To Get Worse Before It Gets Better 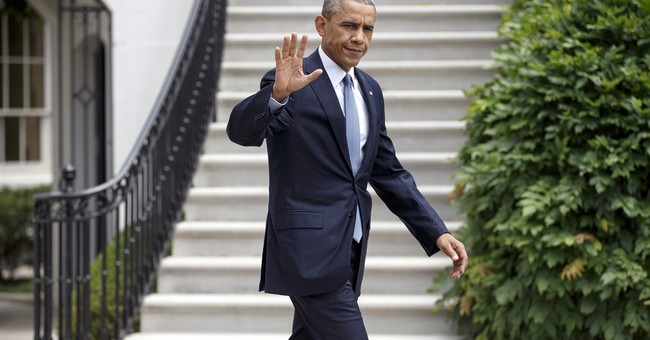 As Obama frantically runs around the country trying to find a motivating message that resonates with the base of his party, it's obvious that he's in over his head, without a serious, substantive agenda, or any workable idea of how to get America moving again.

He's still peddling the same shady shell game to raise the minimum wage, an idea the Congressional Budget Office says would kill up to one million jobs. The Gallup Poll Sunday reported that barely 40 percent now approve of the job he's doing, as more Americans (41 percent in its recent survey) point to a sluggish economy, stagnant incomes and the dearth of good paying, full time jobs as their biggest concerns.


There are other signs of the economy's weaknesses that are getting a lot more attention lately in the national news media than they have in the past.

Yes, "businesses are making record profits, cash hoards are strong and borrowing is exceptionally cheap," Irwin writes. "But companies aren't plowing much money into big-ticket investments for the future."


Indeed, "what businesses spend on equipment, software buildings and intellectual property... still hasn't bounced back to its pre-crisis share of the economy, let alone made up for lost ground from the record lows of 2009," he says.

"What has this got to do with me, or my search for a job or one that pays more than the one I have now," you ask?

But it isn't just businesses who are leery of reinvesting more of their income. Consumers have been just as risk-averse, too, according to recent reports.

Americans are stashing away more money in their bank accounts and other holdings than at any time in the past two decades, according to a report by Moebs Services, an economic research firm.


That's a sign that wary consumers, worried about the economy or losing their jobs, or the lack of any raises in the future, are cutting back on spending, the report says.

In yet another sign the Obama economy is hurting mid-to-low-income Americans -- people he says he wants to help most -- look no further than what's happening to Wal-Mart, the king of America's retail industry.


Over the past five quarters, foot traffic and sales growth have fallen in their U.S. stores whose once-loyal customer base was heavily made up of low income consumers. Last week, the company's board replaced its CEO.

Wal-Mart is "very exposed to the low-end consumer, and that consumer has really suffered a lot," says Faye Landes, a managing director at Cowen and Company, a major investment banking firm.


Earth to Obama: When it gets tougher to make ends meet at Wal-Mart, something is seriously wrong with this country. The people your policies are hurting the most are low-to-middle class Americans.


Realtors are reporting slower home sales, a further sign of a weak economy where the housing industry continues to struggle in in many areas of the country.

Meanwhile, in debt-ridden Washington, the government is still spending as if there is no tomorrow.


The Congressional Budget Office projected last week in its long-term budget outlook that the government expects to rack up deficits of at least $7.6 trillion over the next nine years. Gulp.

When was the last time you heard Obama call for reining in spending? His entire presidency has been made up of a wish list of higher spending for an unending line of special pleaders.

Instead of cutting, consolidating and shrinking the size and cost of the government, making it more efficient, the president has been rapidly expanding it with one program, bureaucracy and federal regulation after another, from Obamacare to the ill-named Consumer Financial Protection Bureau.

Under the former, health insurance premium costs have risen dramatically ever since Obama signed it into law. As for the latter, six years of monster federal budget deficits and increasingly costly government regulations have given consumers higher prices for just about everything we buy -- from food to gasoline.

When Obama was sworn into office on Inauguration Day 2009, regular gasoline was selling for $1.90 a gallon -- and soon after more than doubled.

The price hikes were in large part the result of Obama's oil drilling moratoriums, blocking the Keystone XL pipeline from Canada that would have sharply boosted America's oil supply, reducing gas costs in the process.
Struggling Americans, with families to feed and home mortgages to pay, were forced to foot the bill.
In little more than three months, the voters will have a chance to send a message to Washington about what they have endured over the past six and a half years under this president and his accomplices in Congress.


On just about every domestic and economic policy level, Obama has made things worse. The average length of every recession we've had over the last several decades has lasted about two years or so. Under Obama, many states, including some of the largest, are still in recovery.

On Nov. 4 we will get a chance to tell him directly what we think of his presidency and his policies.
It's Happening: Trump Tells GOP to Fill the Ruth Bader Ginsburg Vacancy 'Without Delay'
Matt Vespa
Liberal America Had an Epic Meltdown Over Ruth Bader Ginsburg’s Death, But They Have Only One Person to Blame
Matt Vespa