Hang in There, America! The Day of Political Reckoning is Only Six Months Away 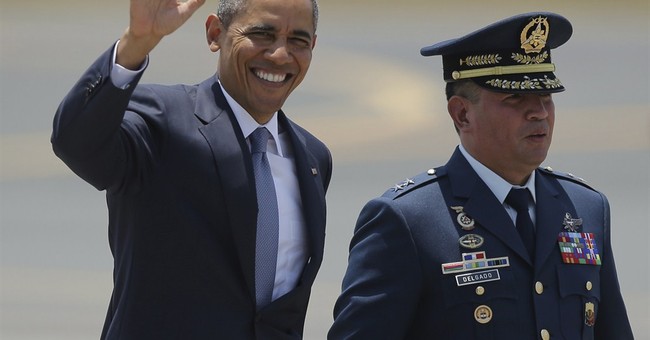 WASHINGTON - President Obama's approval rating in a closely- watched poll has sunk to a new low that will likely further damage his party's dimming prospects in this fall's midterm elections.

As he returns from a week long, four-nation Asian tour, overshadowed by his mishandling of Russian aggression in Ukraine, he faces a Washington Post-ABC News survey showing his job approval score has sunk to 41 percent.

More ominous for Democrats, who now fear they could lose control of the Senate this fall, a majority of voters say "they prefer a Congress in Republican hands to check the president's agenda," the Post reported Tuesday.

Obama's job approval polls have been stuck in the low 40s since last year, but the Post's latest survey shows a sharp plunge in his scores between March and the end of April.

Last month, his approval level stood at just 46 percent, with 50 percent disapproving of the job he was doing. This week, his approval- disapproval score was 41-52 percent respectively. That's the lowest performance grade of his presidency in the Post's surveys.

Other voter responses gave Obama embarrassingly low scores across the board on major issues that will most likely decide who controls Congress in the last two years of his administration.

These and other failing grades cast a pall of gloom over Democrats as Congress reopened for business this week after a lengthy recess. But they gave Republicans reason to cheer that they were winning the midterm election battle for the heart and soul of the American people.

"Obama's low rating could be a significant drag on Democratic candidates this fall -- past elections suggest that when approval ratings are as low as Obama's, the president's party is almost certain to suffer at the ballot box in November," writes the Post's chief political analyst Dan Balz.

The president has openly complained that his party will be in trouble in November because turnout in much of his party's base -- especially among minorities and younger voters -- is always lower in midterm elections.

But surveys show that voter intensity is stronger in the GOP as a result of its deep opposition to Obamacare and the president's failures on the economy and jobs.

Just 39 percent said it was more important to have the Democrats in charge, compared to 53 percent who said, "Republicans in charge." Eight percent had no opinion.

But perhaps no other issue was as fraught with political peril for the Democrats than the persistently weak Obama economy.

On this question, the poll found extensive pessimism about the economy and jobs -- "with more than seven in 10 describing the economy in negative terms."

Despite Obama's insistence over the course of his troubled presidency that the economy has improved under his policies, the Post found that "Public attitudes about the future of the economy are anything but rosy."

These numbers tell us in the starkest terms possible that Americans do not believe the White House claims, or the president's repeated assurance that the economy has gotten measurably better.

They also tell us that Americans have not swallowed the national news media biased reports in recent years that the economy is in a "solid" recovery stage. The news media claims are seen as exaggerated, especially on the jobs front.

How many unemployment reports have we heard each month that more jobs were created, without detailing what kind of jobs they were talking about, at what pay level, or whether they were part-time or full-time.

For example, a revealing new analysis of U.S. Bureau of Labor Statistics data shows that key economic sectors who produced the most jobs in the last four years were the ones that paid the least.

These sectors -- retail, administrative/support work, i.e., answering phones, and restaurant, food and drink services accounted for nearly 40 percent of all the jobs created by private employers since the recovery supposedly began four years ago, according to the National Employment Law Project.

Notably, low paying sectors accounted for 22 percent of lost jobs in the recession from 2008 to 2010. But they now account for 44 percent of the job growth since that time.

"That means that the economy is skewed more heavily than it was pre-recession toward the kind of employment that may not even cover basic housing costs," writes Emily Badger in a story the Post buried at the bottom of page 13.

You didn't hear this on the nightly news, did you? Or for that matter from Democrat leaders in Congress who were fond of labeling all of the jobs created during the explosive Reagan recovery of the '80s as "hamburger flippers."

But the day of reckoning is at hand. The Post-ABC poll found that 45 percent of registered voters said they plan to vote for the Democrat in House elections this fall, while 44 percent said they intend to vote Republican.

When Democrats lost control of the House in 2010, they led by five points on this question.