Obama's Making It Up As He Goes Along 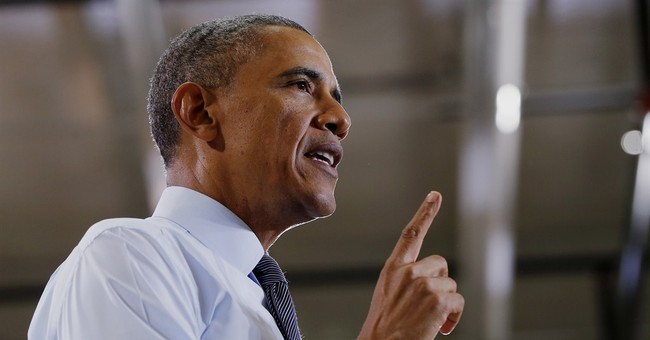 WASHINGTON - The term cherry-picking is often applied to presidents who use inaccurate, narrowly-drawn, fuzzy statistics and claims to coverup their economic failures.

President Obama did that a lot in his fact-challenged, State of the Union address Tuesday night in which he made exaggerated claims that do not stand up to serious scrutiny.

The Washington Post ran a story the next morning by the capital's chief fact checker, Glenn Kessler, under this headline:

"Sifting through some questionable claims by the president."

The Associated Press ran a lengthy fact-checking story, too, with this editor's note at the bottom: "An occasional look at political claims that take shortcuts with the facts or don't tell the full story."

The biggest whopper: Obama's claim that businesses have created "more than 8 million jobs" over the last four years."

"The president is cherry-picking a number that puts the improvement in the economy in the best possible light," Kessler says.

Obama chooses to use only job figures since February 2010, when the economy reached its low point in jobs, and that produces a gain of about 8 million. But his presidency began in 2009 and the Bureau of Labor Statistics says that only 3.2 million jobs have been created since then.

And even this number is about 1.2 million fewer "than when the recession began in December 2007," Kessler adds.

As he's done in all of his speeches about the economy, Obama talked about a "manufacturing sector that's adding jobs for the first time since 1990s."

Yes, there's been a gain of 570,000 jobs since January 2010. But the BLS factory data shows "that the number of manufacturing jobs is still 500,000 lower than when Obama took office," Kessler says. And it's still 1.7 million jobs lower since the recession began.

He claimed the budget deficits have been "cut by more than half." But Kessler correctly notes "that's not much to brag about."

What Obama didn't say was the deficits soared under his presidency in his first term by more than $1 trillion a year as a result of lower revenues and massive spending increases that included his failed $800 billion stimulus bill.

Obama claims that more than 9 million Americans "have signed up under the new law for private health insurance or Medicaid coverage."

He didn't say they signed up for Obamacare but he seemed to suggest that.

But the 6.3 million people who signed up as a result of the Medicaid expansion remains a questionable figure that may have included renewals or many who would have been eligible for the program anyway. Kessler called it a "very fuzzy" number that had previously earned three Pinocchios in his widely-read dishonesty ratings.

In addition to a half dozen dubious claims that Kessler deflated in his story, the AP's Calvin Woodward produced several more, particularly on Obamacare.

Obama seems to think that he can make things up as he goes along, hoping he won't be called on his claims, as he was when he repeatedly, blatantly and falsely promised that "if you like your health insurance policy you can keep it. Period."

After more than five million Americans got notices from their private health insurance company that their policies were cancelled because they didn't meet Obamacare's mandates, he confessed that he had badly misled the country.

But, unlike Pinocchio, apparently Obama didn't learn his lesson.

On Tuesday night, he declared to all Americans that under his Obamacare law, he has been able to offer a banquet of health care benefits, while "keeping Medicare premiums flat."

Not true, Woodward reported later that night. "They've gone up."

"Medicare's monthly premium for outpatient care has gone up in recent years," he writes. It rose by $5 a month in 2013, up from $99.90 in 2012. Obama's health care law also raised Medicare premiums for upper-income beneficiaries, and both the president and Republicans have proposed to expand that."

Reciting a long litany of health care services his new law offers, Obama boasts that "we did all this while adding years to Medicare's finances."

But Woodward points out that this questionable claim "is hotly debated."

On paper, as a result of Obamacare's cuts to Medicare service providers, inpatient care has supposedly gained a decade of solvency.

But "in practice those savings cannot simultaneously be used to expand coverage for the uninsured and shore up Medicare," he writes.

Another whopper in Obama's speech, was his claim that he will raise hourly pay for certain low-income Americans simply by the stroke of his pen.

"In the coming weeks, I will issue an executive order requiring federal contractors to pay their federally funded employees a fair wage of at least $10.10 an hour, because if you cook our troops' meals or wash their dishes, you shouldn't have to live in poverty."

But this is a cruel political, shell-game to avoid dealing with the fundamental causes of stagnant wages in a still sluggish economy.

Most federal contract employes are already paid more than $10.10 an hour, in fact, often much more. It will not raise the pay of a single present federal worker, only new hires. It won't kick in until 2015 or later.

Obama and his desperate speech writers threw every half-baked idea they could find into this speech, making up preposterous claims and playing fast and loose with the facts.

Entirely missing from Obama's address is a well-thought out, investment-driven plan to accelerate the economy's growth rate, the only time-tested way to create jobs and boost incomes. He still doesn't get it.