You Need to Break Some Eggs to Make an Omelette and Sometimes a Shutdown to get a Budget Deal. This is One of those Times 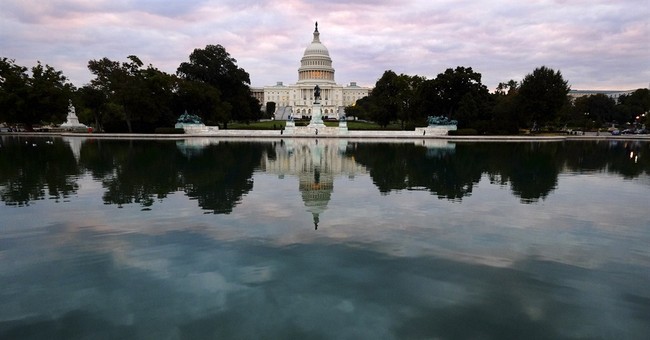 So here we are in the midst of another government shut down, testing once again if those fire and brimstone predictions will come to pass and the fabric of our nation will be torn to shreds.

And of course it won't. There have been 17 government shut downs since 1977. Most lasted little more than three days or less, according to the Congressional Research Service.

This one could last a little longer, but I wouldn't bet the farm on it. As for a long term political impact against the Republicans, don't bet on that, either. There's evidence it will have no impact.

I'll get to that in a moment.

An estimated 800,000 federal workers here and around the country will be furloughed for a period of time, and for some, the loss of pay will pose problems. But there is no more secure employment anywhere than those enjoyed by government bureaucrats, with generous benefits that tens of millions of private sector workers can only dream about.

The shutdown will end and federal workers will return to their jobs. But for millions of unemployed Americans who have lost their jobs or are working fewer hours as a result of looming health care mandates from Obamacare -- or a dreadful Obama economy -- their nightmare doesn't end.

The networks' nightly news will be saturated with stories about furloughed federal workers who were immune from the worst of the recession. But stories about the millions of workers who've been jobless in the Obama economy have been a rarity on the TV news shows.

You won't see this on the news tonight, but this is the reason why House Republicans are calling for a one year delay in Obamacare's individual mandate. Employers are laying off workers or halting new hiring because they fear Obama's health care costs will drive them out of business.

If we are to believe the Democrats, the Republicans are going to pay for this shutdown with heavy political losses in the 2014 midterm elections.

While a Washington Post poll says 63 percent of voters blame House Republicans for the shutdown, they're not happy with the way Democrats are dealing the impasse, either.

Fifty percent disapprove of the way Obama is handling it, while 56 percent think Senate Democrats are wrong not to discuss the issue with House GOP leaders.

Don't be fooled by those polls showing public approval of Congress has fallen into the teens or single digits. Other polls routinely show voters overwhelmingly approve of the job their own representatives are doing.

GOP analyst John Feehery, who was Speaker Dennis Hastert's press secretary, says any impact on Republican candidates next year will be minimal because most are in overwhelmingly Republican districts.

"I don't think anyone's going to lose their seat because they stood up to Barack Obama," Feehery says.

The House GOP's fallback position for a one year delay in Obamacare's individual mandate may sound like a good idea to many voters when their employers begin to step up job-cutting plans to reduce their health care costs.

"That's a pretty big move and is worthy of negotiation, not sneering rejection," Republican pollster Glen Bolger writes in a memo to GOP leaders. "Obama's refusal to negotiate and compromise needs to be hammered home. The press won't cover it unless we say it."

Obama may think he holds the high ground on the shut down, but it could also be illusory as the political impact of Obamacare unfolds in the months to come.

As for as his own job approval scores, the president is skating on pretty thin ice to begin with. The daily tracking Gallup Poll has shown Obama stuck in the low 40 percent approval range, with disapproval marks skirting close to 50 percent.

And his scores are likely to get worse for the remainder of his term, because life in the U.S. is not going to get any better under his policies, according to one major study.

Four years into a shaky economic recovery that has eluded many Americans, "a majority believe the American Dream is becoming markedly more elusive," according to a Washington Post-Miller Center Poll that reveals a steep decline in the nation's "confidence in the country's future."

"Do you ever worry that your total family income will not be enough to meet your family's expenses and bills?" the poll asked 1,509 Americans last month. Sixty-five percent said they "worry" compared to 48 percent who said that four decades ago.

"More than six in 10 workers worry they will lose their jobs because of the economy," the Post reported.

This is the gloomy future Americans face in an economy that Republicans say will worsen under Obamcare.

If the president and Senate Majority Leader Harry Reid really believe the Republicans are going to pay a painful political price for the shutdown, they'd better think again.

Gallup analysts Tuesday released polling data after the last 1995/1996 closure that showed "the repercussions of that past conflict ranged from none to short-lived, in terms of Americans concerns about the U.S. and the political players involved."

The budget battle had little impact on the public's views on House Speaker Newt Gingrich, President Clinton or Congress. In fact, Clinton went on to sign the Republicans' welfare reform law and a major GOP capital gains tax cut that led to an economic revival and full employment.

Sometimes a budget fight is needed to break through a legislative logjam with the White House and Congress and win desperately needed economic reforms for the good of our country.

This is one of those times.