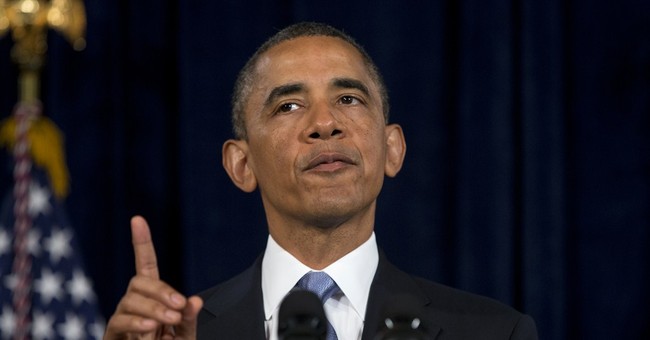 President Obama's job approval polls are declining, proving Abraham Lincoln's admonition that you can't fool all the people all the time.

The Gallup Poll reported Thursday that Obama's job approval grade has fallen to an embarrassing 46 percent and that 47 percent of those polled disapprove of his second term performance, up by three points.

To add insult to injury, Obama has to swallow the news that his Republican predecessor, on whom he has blamed all of his problems, is now much more popular -- in fact, he's more popular than Obama right now.

A separate Gallup survey finds that former President George W. Bush is seen as "more positive than negative for the first time since 2005, with 49 percent rating him favorably and 46 percent unfavorably."

That may be the result of Bush's decision to stay out of the "political swamp," as he calls it, and refrain from making any disparaging remarks about his successor. But it may also signal the public's longing for a tame $147 billion budget deficit near the end of Bush's presidency, a 5.2 percent average unemployment rate over his eight years, and less than $2 for a gallon of regular gasoline at the end of his term in office.

Now in the sixth month of his unfocused, purposeless, and scandal- ridden second term, Obama's troubled presidency is wearing thin among the many Americans with a chronic case of buyer's remorse.

He promised to bring the high unemployment rate down to about 6 percent, but it remains at 7.6 percent. Nearly 12 million Americans are still unemployed.

The real unemployment rate -- when you add part-time workers who need but can't find full-time jobs and millions of discouraged people who can't find work and have stopped looking -- is closer to 14 percent.

He said he would boost the economy's growth rate to get America working again. But economic growth (as measured by GDP) is stuck in an anemic 2 percent range at best, and it's fallen well below that level in recent quarters.

He said he would hold the line on gas prices, but they've risen to budget-busting levels under his anti-fossil fuel, anti-oil exploration policies. The average price of a gallon of regular gasoline at the pump was running around $3.63 Thursday, according to AAA's Daily Fuel Gauge Report, though the price was nearly $4 a gallon and higher in much of the country.

Gas prices today are higher than they were a year ago, according to AAA, but that doesn't surprise people who have closely tracked Obama's belief that higher gas prices are good for us. Here's the inside story:

When Obama took office, regular gas was selling for $1.90 a gallon under Bush. The decline in gas prices under the Bush administration was a welcome relief to motorists, but not to Obama, who believes gas prices must rise substantially if alternative fuels are to become economically viable.

During the 2008 presidential campaign, Steven Chu, a physicist professor at Stanford University and one of Obama's energy advisers, told the Wall Street Journal: "Somehow we have to figure out how to boost the price of gasoline to the levels in Europe" where gas prices are about $9 a gallon.

That was music to Obama's ears. He made Chu his secretary of energy, and gas prices soared.

Over the past six months, Obama has been battered by one scandal after another, further eroding whatever trust voters had in him when they gave him a second term.

The administration's slippery explanations, doubts, and denials about what was clearly an all-out terrorist attack on our consulate in Benghazi spawned suspicions that the White House was playing politics with this tragic event in the mist of the 2012 campaign.

To this day, the White House's response has the rank smell of coverup. The State Department still hasn't explained satisfactorily why the pleas of Ambassador Christopher Stevens for increased security were coldly ignored before terrorists murdered him and three other Americans.

Then came the nasty IRS scandal where, under orders from Washington officials, federal tax agents targeted and intimidated dozens of conservative groups during the 2012 campaign cycle to delay and deny their tax-exempt status.

The scandal isn't that we've used telephone and internet data tracking, under oversight by the courts, to uncover and foil terrorist attacks on our country and our allies. The police have used such tools in their criminal investigations for a long time.

The real scandal is this administration's negligent hiring practices in our intelligence agencies and its loose security rules which allowed this national security thievery to take place.

The White House still hasn't bothered to explain how much damage has been done to homeland security on Obama's watch.

The result: The President is fast losing the confidence of Americans who voted for him in November. They see a chief executive who has an excuse for everything that's gone wrong and who spends much of his time at party fundraisers focusing on next year's midterm elections.

In a recent nationwide survey, the Gallup Poll read out a list of institutions in American society, asking "how much confidence you, yourself, have in each one."

Confidence in the Obama presidency ranked fifth in the responses -- a dismal 36 percent.

Elise Stefanik Not Backing Down After Smear from Democrats, Mainstream Media Blame Her for Buffalo Shooting
Rebecca Downs