It's Time to Come Clean Mr. President, These Are Your Scandals 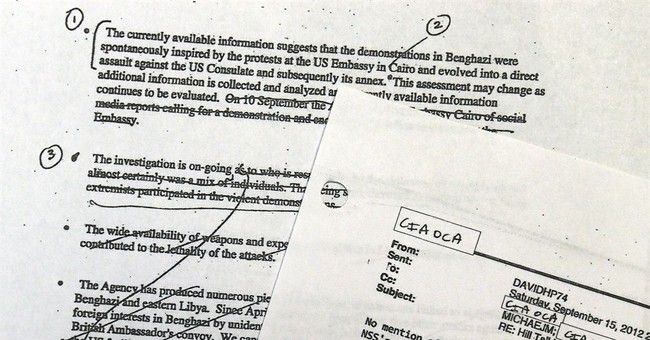 Barack Obama's second term may be remembered more for his scandals than for anything else he's done thus far in his troubled presidency.

It's hard enough trying to put out one fire, but the White House now has three fires burning out of control at once -- igniting a torrent of investigations on Capitol Hill, a criminal investigation in the Justice Department and the resignation of the man who ran the IRS.

The scandal over the Obama administration's handling -- and apparent cover up -- of last year's al-Qaeda driven attack on our consulate in Benghazi, Libya that led to the murder of our ambassador and three other Americans is showing no signs of going away.

It began with questions about why the desperate pleas for added security from U.S. Ambassador J. Christopher Stevens went unheeded at Obama's State Department. Then it morphed into the White House's dubious claim that the killings resulted from a protest that just got out of hand. It turned into something a great deal more sinister when the administration's talking points went to great lengths to downplay, or even refute, that this was a terrorist attack by an al-Qaeda- affiliated group.

Days went by before the White House could admit the Benghazi assault was a terrorist act. Any admission that al-Qaeda was involved came even later as the scandal's fires intensified. More recently, a State Department official told a House hearing he knew it was a terrorist action from day one.

Getting information from the White House has been like pulling teeth. At a news conference this week, Obama was dismissing Republican criticisms about the administration's multiple explanations of the Sept. 11, 2012 terrorist attacks as nothing more than a political "side show."

That dismissive counterattack ranks with Secretary of State Hillary Clinton's insensitive, "What difference does it make?" remark at a Senate hearing into the murders and their aftermath.

Then on Wednesday, Obama's administration grudgingly released what GOP leaders were seeking -- 100 pages of e-mails that revealed multiple, heavily laundered drafts of its talking points about what happened.

The e-mails revealed that the explanations went through a dozen revisions, showing that the State Department was more concerned with how the talking points would play on Capitol Hill, especially among their Republican critics.

Dropped from the draft, for example, were references to the CIA's early warnings about potential terrorist violence at the U.S. consulate.

Administration officials also resisted any reference that the terrorist attackers included the Islamist extremist group Ansar al- Sharia that is closely affiliated with al-Qaeda. A chief political claim in Obama's re-election campaign at the time was that al-Qaeda had been "decimated," while the deadly attack on our U.S. consulate suggested otherwise.

The more recent scandal over the Justice Department's unprecedented, secret seizure of the Associated Press's phone records strikes at the heart of the Bill of Rights and the Constitution's First Amendment promise to protect the freedom of the press.

In this case, the White House was directly involved in the administration's efforts to hold up or delay publication of an AP exclusive about a foiled al-Qaeda plot to blow up a U.S. passenger jet.

Attorney General Eric Holder, who personally signed off on the decision to examine the phone records of the AP's reporters and editors, said the story's release endangered the nation's security. But emerging details suggest that is not even remotely true.

During a series of meeting between AP editors and the government about plans to release the story, the CIA tried to hold up or delay the story. At a meeting on May 7, 2012, "CIA officials reported that national security concerns were 'no longer an issue,'" the Washington Post reported Thursday.

Nevertheless, the White House, looking for any political advantage it could in the midst of Obama's campaign, said it wanted to put out its own version first, and offered to let AP release its story a few minutes before the White House announcement. AP flatly rejected the offer and published its exclusive.

Holder's claim this week that the AP's disclosure "put the American people at risk" has absolutely zero credibility. The day after AP ran with its story, John O. Brennan, then the White House's counterterrorism adviser, went on TV to say the plot posed no active threat to the American public.

The administration's seizure of the AP's private phone records to find out who its sources were was a petulant act of revenge for not getting its way -- and a chilling warning to the Washington news media not to dig too deeply into the administration's activities, or else.

It's clear the West Wing is at the center of this scandal that may well be headed to the courts. Only tyrants think they can thumb their nose at the Constitution and ride roughshod over a free press.

The Nixonian use of the Internal Revenue Service to punish and persecute Obama's political opponents may be the worst of these abuses because it strikes at the heart of our democratic, political system.

These scandals will define Barack Obama's presidency throughout his second term. Hearings are lined up as far as the eye can see and if there is any justice left in this government, the perpetrators will be "put in jail", as House Speaker John Boehner suggested the other day.

The big question of who is to blame and how far up the chain of command does it go remains to be answered.

As Romero says, "the tone is set at the top." It's time to come clean, Mr. President.