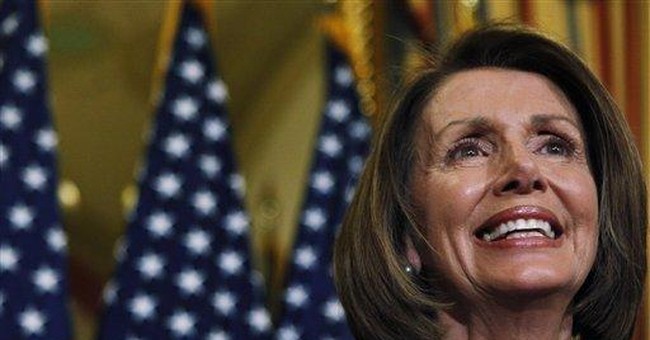 WASHINGTON -- In a last-ditch scheme in defiance of the Constitution, House Speaker Nancy Pelosi and her Democratic accomplices plan to send the Senate health care bill to President Obama without a clean, up-or-down vote on its merits.

As Democratic leaders struggled to find 216 votes to pass the bill by a majority vote, as required under the enacting procedures set forth in the Constitution, their fallback was a nefarious plan whereby the House would "deem" the legislation as passed so that vulnerable Democrats would not have to cast a recorded vote on the hugely unpopular bill.

After more than a year of legislative combat over a bill that will effectively put a massive new government bureaucracy fully in charge of the nation's private health care system -- and impose a raft of new taxes on Americans, businesses and the economy -- Democrats had reached a stalemate that threatened to kill the centerpiece of Obama's presidency. Their problem: the Constitution's vexing requirement for a majority vote to enact bills into law.

Then Pelosi and her friends came up with an idea to get around the Constitution. The complicated maneuver, which has been in the planning stages for weeks, has received little or no detailed attention in the network nightly news shows and Democrats are happy about that. Perhaps the less the American people know about the Democrats' run around the Constitution, the better it is for Democrats and their plans for an unprecedented expansion of the government.

"It's more insider and process-oriented than most people want to know. But I like it, because people don't have to vote on the Senate bill," Pelosi told bloggers in a roundtable discussion Monday.

In a nutshell, Pelosi Democrats have decided to ram the Senate's 2,700 page, $1 trillion bill through the House under a shady tactic that has never been used on major pieces of legislation, known as a "self-executing rule" or a "deem and pass."

The House Rules Committee will deliberate the Senate bill, along with a package of amendments that fixes whatever Democrats don't like about it. The House will vote on the committee's rules of procedure and it will be deemed to have passed the Senate bill. Then it will take up the so-called fixes and send them to the Senate. It's a high-risk gamble by the House because there is no assurance the Senate will pass them, but by then it won't matter because Obama will have signed his health care bill into law.

Will this pass Constitutional muster? That question will most likely end up before the Supreme Court.

Article 1, Section 7 of the Constitution, which sets forth the rules under which every bill is passed, is crystal clear about how laws are made in this country, even if Pelosi and her gang are not.

Section 7 clearly states, "in all such cases the votes of both houses shall be determined by yeas and nays, and the names of the persons voting for and against the bill shall be entered on the journal of each house respectively."

In other words, no legislation can be considered passed without a recorded vote of the members of each chamber. There are no "deemed to have passed" or "self-executing" legislative maneuvers in the Constitution.

Moreover, the Supreme Court has ruled on this issue before, so there are precedents in case law, according to Republican staffers who have been researching this. They point to a 1998 ruling by the high court that said each house of Congress must approve the exact same text of the bill being considered before it can be signed into law by the president. Any changes in that bill require that it be sent back to the other house for its concurrence or rejection.

Do the fix-it amendments attached to the legislative plan to approve the Senate bill effectively change the bill being sent to the president? Is this evasive Democratic maneuver too clever by half? These are questions the Supreme Court will be asked to answer if House Democrats go through with their attempts to sidestep the Constitution.

Meanwhile, health care analyst Grace Marie Turner reminds everyone of "one simple fact behind all these bizarre contortions of the legislative process: The House completely distrusts the Senate." Will the Senate pass the House fixes under reconciliation, or will the hundreds of amendments prepared by Senate Republicans make that expectation highly unlikely?

But in the end, the American people will not be fooled by this flimflam maneuver. House Democrats will have to vote on the rule before they can take up this legislative bag of tricks, and everyone will know who voted to circumvent the democratic process.