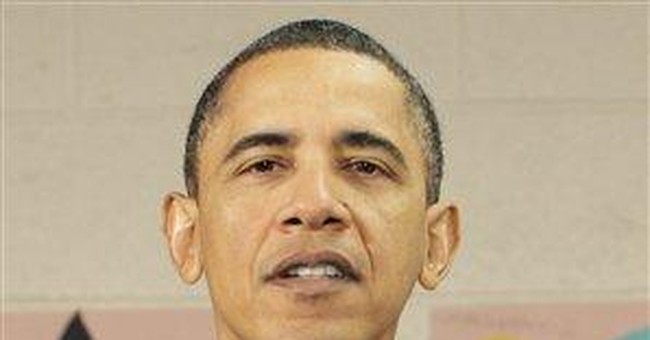 WASHINGTON -- Once again, President Obama accused the big banks last week of selfishness and greed, as his advisers were dishing out fictitious jobs numbers in a desperate attempt to distract our attention from his failed economic policies.

Only this time, the shamelessly unquestioning news media has begun to respond with signs of disbelief, challenging his blame-game motives and the hocus-pocus job "stimulus" figures his economic advisers have been peddling to an increasingly dubious electorate. They've started focusing, too, on the other economic skeletons in Obama's closet, like a projected 17 percent jobless rate among black Americans and stunning 50 percent rate among black teens who have been priced out of the job market by a higher minimum wage.

The Associated Press released a blockbuster investigative report titled "Stimulus cash doesn't create local jobs," while Washington Post economic columnist Steven Pearlstein said Obama's attack on the nation's biggest banks for what he said were "massive profits and obscene bonuses" was "disingenuous" at best. Most of the biggest banks have repaid the loans with interest, and his Treasury secretary approved the early payments.

In its second quarterly report to Congress, the president's economists said his $787 billion stimulus package has created or saved between 1.7 million and 2 million jobs. Christina Romer, chairman of the President's Council of Economic Advisers, called the numbers "a truly stunning" result of the snail's-pace stimulus package that so far has spent only one-third of its money.

But Washington Post reporter Alec MacGillis points out that Romer's new figures "are based on macroeconomic estimates, not reports filed by stimulus funding recipients." Worse, they are based on slippery accounting standards that wouldn't pass a course in Accounting 101, and that cannot be accurately verified by anyone.

Among them: questionable standards to estimate how many Americans would have lost their jobs but didn't because of the stimulus spending. In some cases, the number of "saved" jobs totaled 100 percent of employees in a business or government program, while in others cases, no existing jobs were saved after receiving federal funding.

The day before Romer's numbers were released, the AP published an independent analysis of the jobs stimulus by economists at five universities who found little support for the president's contention that huge infrastructure spending would revitalize the economy.

"A federal spending surge of more than $20 billion for roads and bridges in President Obama's first stimulus has had no effect on local unemployment rates, raising questions about his argument for billions more to address an 'urgent need to accelerate job growth,'" the study said.

But the American people do not need any economic studies to tell them what they know firsthand in their states and communities -- that Obama's government-spending stimulus isn't making a dent in the unemployment figures.

Despite the anemic 2 percent economic-growth numbers in the third quarter, this is a weak economy that is still hemorrhaging jobs, nearly 100,000 last month. Moreover, 661,000 discouraged workers dropped out of the workforce last month that, if counted, would push the 10 percent jobless rate to a near-Depression-era 17 percent.

That is why almost half of all Americans now say he has not delivered on his major campaign promises and a majority of Americans now say they have little or no confidence in his future decision-making. In April, 63 percent said they thought Obama would accomplish "a great deal" or "a good amount." That has plunged to 47 percent, reports the AP.

Those poll numbers are expected to get worse as unemployment rises among his party's bedrock constituencies, including blacks and Hispanics. A report from the Economic Policy Institute projects the jobless rate for blacks will reach 17.2 percent in the third quarter of this year and hit 14 percent for Hispanics -- his most loyal supporters.

So there was Obama last week, bashing Wall Street and the big banks, seemingly for everything that's wrong with the economy, and proposing a bank tax to punish them. The White House's thinking: It worked for him in his campaign; maybe it will work for him now.

But this was more than just demagoguery; it was bad policy. Taxing the banks will only reduce the funds they have to lend to business and homebuyers, whom we want to encourage, not discourage.

The bank tax might give Obama more stimulus money to spend, which he is seeking from Congress, but it won't create a single private-sector job for anyone. In fact, it will reduce jobs by siphoning still more money out of the economy and sending it to the federal government, which will waste it -- as it did with bad loans to GM, Chrysler and GMAC.

But Obama's predictable prescription for every conceivable economic ill in the country is always another tax on the economy and, ultimately, on all of us. The dismal jobs numbers and weak economy not only show it isn't working; it is not going to work at all.