Ready to Pull the Plug on Reform 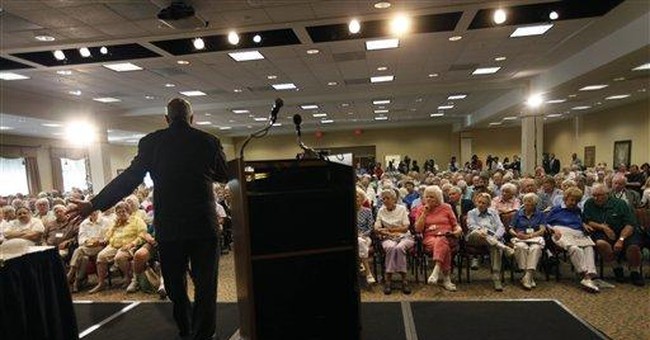 Trending
WASHINGTON -- President Obama's government-run healthcare plan has been hooked up to life-support systems as he prepares to make one more desperate attempt to pull it back from the brink of death.

The president's decision to remake the case for its passage before a joint session of Congress next Wednesday is based on the mistaken belief that his plan lost public support because it lacked a clear, compelling message. But the centerpiece of his presidency was brought down by much bigger and far more strategic weaknesses than Obama's confusingly vague and often contradictory arguments in its behalf.

Americans instinctively rebelled against it because they do not think that government can run any business efficiently and effectively, least of all the nation's complex healthcare system; that with the government running up trillions of dollars in new debts, we cannot afford to add yet another huge spending entitlement program to its bills; and because of the certainty that a new federally regulated healthcare system will rob us of the freedom to make our own medical decisions without government interference and the often unintended consequences that invariably flows from the nanny state.

Increasingly, as people considered what the Democratic-run Congress and Obama were contemplating, the idea of passing a trillion-dollar-plus healthcare plan (whose real cost will be much larger), they quickly came to the conclusion that this did not make any fiscal sense.

Before Obama, the deficit never exceeded $500 billion. With the U.S. economy still in a recession, and the government plunging more deeply into debt, enacting a new monstrously expensive social-welfare spending plan sounded crazy.

To say the White House's handling of the healthcare debate has been as disaster is putting it mildly. Americans have not only turned against the plans that Obama and the Democrats have put forward; they have turned against how the president has been handling the issue and the ensuing debate. He has lost his majority on both counts.

A CNN/Opinion Research poll reported last week that Americans were opposed to Obama's healthcare plan by 51 percent to 48 percent. Other polls showed support falling even lower.

Moreover, the declining support for his plan was spilling over into how Obama was dealing with the healthcare issue in general as the nation's chief executive. The CNN/Opinion Research poll found that 53 percent disapproved of the way he was handling the issue, a sign that this was also undermining his presidency.

At the end of June, 61 percent approved of the way he was handling his job as president. By the end of last month, his approval-disapproval rating had fallen to 53 percent and 45 percent respectively.

A number of other factors were contributing to the White House train wreck on healthcare, and most of them were Obama's doing.

The decision to attack Americans who showed up in large numbers at hundreds of town-hall meetings during the congressional recess to vent their opposition to his plan boomeranged, particularly among independents.

But perhaps in the end, for all his talent as an orator, it was Obama's failure as a communicator and a salesman that also contributed to the downfall of his healthcare plan.

His attacks on the health-insurance industry backfired. Polls show that most Americans are satisfied with their private coverage. His attacks on surgeons as greedy, profit-conscious doctors fell with a thud. All too often his statements about the costs of certain medical procedures proved to be untrue. He claimed that AARP, the senior-citizens lobby, had endorsed his plan. It has not.

Thus, it was not surprising that the CBS News poll discovered that 60 percent overall, including 65 percent of independents, said Obama had not clearly explained his healthcare-reform proposals.

Now the president goes before Congress in a last-ditch effort to rescue a plan that is teetering on the brink of defeat as public opposition to that plan and his presidency continues to rise.

He won the presidency on his claim that he would change the tone in Washington and bring opposing factions together through compromise. But the White House has been in a campaign attack mode ever since, and his own party is so divided over his plan that many are now ready to pull the plug.