An Anemic Recovery for the U.S. Economy 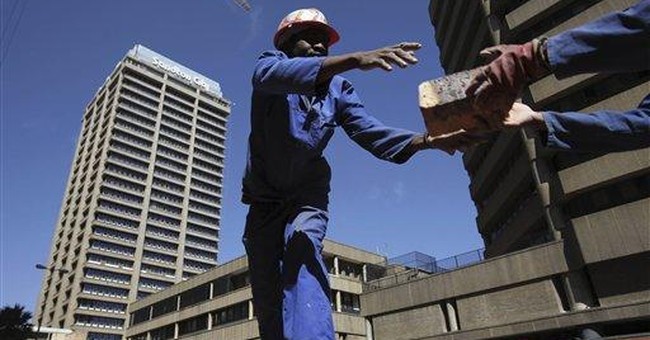 While there are fragile signs the recession appears to be bottoming out and making a tenuous comeback in parts of the economy, the painfully slow turnaround has had little to do with the Democrats' huge $800 billion spending binge that hasn't made a dent in the nation's unemployment rate.

Indeed, the White House announced this week that the jobless rate will climb next year and remain high in 2011 in the face of record budget deficits and a tripling of the government's public debt.

White House projections in its mid-session fiscal review tell the story. The government's annual budget deficit has never hit $500 billion, but under Obama's spending policies, it will sail over $1.5 trillion this year, a quarter of a trillion dollars more than the administration estimated in May.

Under its latest projections, the deficit will remain at $1.5 trillion in 2010, falling to $1.12 trillion in 2011 and then down to $800 billion in 2012. If the new numbers are anything like their previous estimates, we can expect them to turn out much higher than projected.

All this means massively higher public debt that stood at $5.8 trillion at the end of fiscal 2008, but that will nearly triple in 10 years to $17.5 trillion.

But don't expect this added spending to stimulate the economy anytime soon. On the contrary, the administration expects unemployment to remain in the higher ranges for the next several years at least.

The White House originally projected the economy, as measured in the gross domestic product, would shrink by 1.2 percent this year, but now expects GDP to decline by 2.8 percent, while independent analysts say the contraction could be deeper than that.

The administration isn't any better in its unemployment projections, which were more than a little rosy earlier this year. It projected the jobless rate at 8.1 percent this year, falling to 7.9 percent in 2010 and 7.1 percent in 2011.

Little wonder that a USA Today/Gallup Poll found earlier this month that 57 percent of the American people surveyed believe that Obama's stimulus package has had no impact on the economy or has made things worse. Sixty percent doubt it would have much, if any, effect in the years to come.

"In one of its most intrusive expansions, Washington has become the nation's allocator of capital, setting detailed requirements and accounting rules in ways that channel credit to favored states, industries and uses. Small businesses and consumers are bearing the brunt of this credit market shift," writes Wall Street economist David Malpass in this week's issue of Forbes magazine.

"On most points the Bush administration went the other way: It spent heavily and encouraged market volatility," he continues. "Instead of reversing these mistakes, the Obama administration has maintained most Bush policies, while adding tax risks and even more spending."

From the Federal Reserve Board to Wall Street, there is the growing expectation that the recovery, when it comes, will be slow and anemic.

Malpass, too, sees "a weak recovery," as a result of a weak dollar and capital flight to seek better returns abroad, "even as we systematically increase our own cost of capital with tax increases, volatility and the erosion of contract law."

Democrats are also calling on the administration to change its policy on trade to open foreign markets to U.S. goods and services as a key part of its recovery policies.

"The current economic downturn and the need to create jobs make reflexive anti-trade sentiments more foolhardy than ever," writes global economic analyst Edward Gresser at the Democratic Leadership Council Web site. "Recent export growth has been one of the few bright spots amid the deluge of bad news from businesses across the spectrum, and efforts to give innovative new American businesses access to foreign markets should be at the top of any comprehensive agenda to pull the nation out of recession."

Meantime, the bleak numbers coming out of the White House mean that the economy is in for a slow, mediocre recovery that suggests Democratic losses in next year's midterm elections.